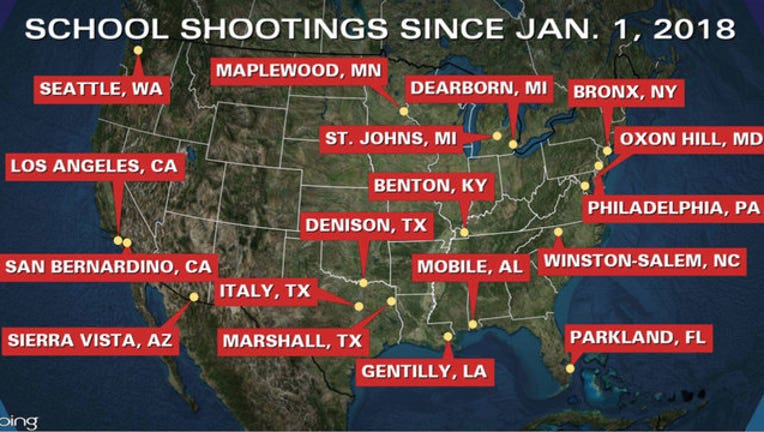 (FOX 26) - Seventeen people are dead and more than a dozen injured after a former student opened fire at Marjory Stoneman Douglas High School in Parkland, Florida.

Everytown for Gun Safety says this is the 18th shooting at a school since the start of 2018. That number includes shootings where guns were fired accidentally, no one was injured, suicides, and shootings near campuses.

Three were in Texas, including one where a teen at Italy High School shot a girl four times over a breakup.

The non-profit organization says there have been more than 300 school shootings since 2013. That's an average of one per week.

Many are quick to point out that these gun-related incidents at schools are not what most would consider a school shooting.

As an op-ed in the Washington Examiner reads, "Using the term 'school shooting' to describe events in which the shooter intended no harm to anyone but himself, or where a gun was fired accidentally, is plainly misleading."

Whether they were school shootings or gun-related incidents, many people feel 18 is too many, that one is too many.

Here are the gun-related incidents at or near school campuses since the start of 2018:

January 3: A 31-year-old man in St. Johns, Michigan, died from a self-inflicted gunshot wound in the parking lot of East Olive Elementary School, which had been closed since June.

January 4: No one was injured when a bullet was fired into New Start High School in Seattle.

January 9: A 14-year-old student was found dead from a self-inflicted gunshot wound in a Coronado Elementary School bathroom.

January 10: Bullets hit a building and a window at California State University, San Bernardino. No one was injured.

January 10: A student confused a training weapon with a real gun and accidentally fired a bullet through a classroom wall at Grayson College in Denison, Texas. No one was hurt.

January 15: Gunshots rang out in a parking lot of Wiley College in Marshall, Texas. A stray bullet went through the dorm room. No injuries were reported.

January 20: A Winston-Salem State University football player was shot and killed at an event at Wake Forest University.

January 22: Someone driving by Net Charter School in New Orleans shot at a group of students in the parking lot. One boy was injured.

January 23: A 15-year-old student opened fire with a handgun inside a Benton, Kentucky high school. Two students died and 17 others were injured.

January 25: A 16-year-old student fired multiple shots at another student at Murphy High School in Mobile, Alabama. No one was injured.

January 26: Someone fired shots from a car in the Dearborn High School parking lot in Michigan. It happened during a basketball game, but nobody was injured.

January 31: A group of men exchanged gun fire in a parking lot at Lincoln High School in Philadelphia. One man, who was hit in the legs and chest, died at the hospital.

February 1: A 12-year-old girl took a gun to Salvador Castro Middle School in Los Angeles, where it went off accidentally and wounded two students.

February 5: A 17-year-old student was shot in the parking lot of Oxon Hill High School in Oxon Hill, Maryland.

February 5: A third grader at Harmony Learning Center in Maplewood, Minnesota "pressed the trigger of [an] officer’s gun causing it to discharge through the bottom of the holster." No one was injured.

February 8: A 17-year-old student fired a gunshot at the Metropolitan High School in the Bronx. No one was injured.

February 14: 17 people were killed and over a dozen injured at Marjory Stoneman Douglas High School in Parkland, Florida after a former student opened fire.