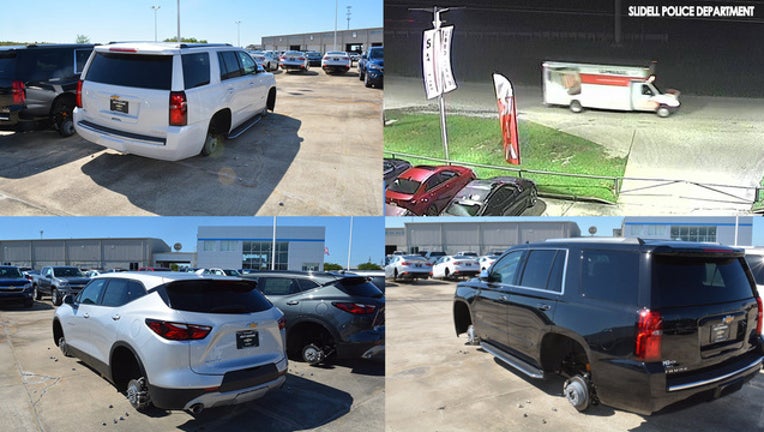 SLIDELL, La. (FOX 26) - Police is Louisiana are investigating the theft of 124 tires and wheels from 31 vehicles at a car dealership.

Slidell police were called to the Matt Bowers Chevrolet dealership on Saturday morning when a manager discovered the missing tires and wheels, which are estimated to be worth $124,000.

“They defeated locks, alarms, surveillance video, and went as far as to manipulate the exterior lights in the parking lot so they could work in the dark of the night, completely undetected,” police wrote on Facebook.

Police say surveillance video shows two subjects cut locks on a side-entrance, a U-Haul truck entering a rear parking lot of the dealership, and the U-Haul leaving about 40 minutes later. Investigators believe the suspects began removing the tires several hours before the U-Haul appeared in the video.

The Slidell Police Department says they have identified two more similar thefts in Texas and Oklahoma. They say although they cannot rule out that the suspects are local to Slidell, they do not believe they are from the area.

The owner of the dealership is offering a $25,000 reward to the person who provides information leading to the arrest of the suspects, half to be paid upon arrested and the other half upon conviction.

Anyone with information is asked to contact the Slidell Police Department at 985-646-4347 or e-mail pio@slidellpd.com.