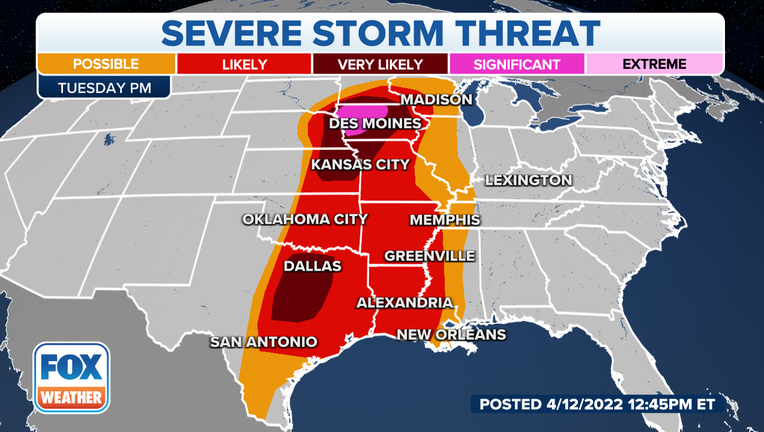 The Texas State Emergency Operations Center (SOC) is operating at Level II: Escalated Response in support of severe weather and wildfire response, according to a press release from the governor's office.

According to the Texas A&M Forest Service, a Southern Plains Wildfire Outbreak is possible today in the Texas Panhandle. This may impact communities near Canadian, Amarillo, Childress, Lubbock, and Midland where extremely dry vegetation will be subjected to above normal temperatures, low humidity, and high wind speeds.

"The State of Texas has mobilized resources for West and East Texas ahead of critical fire weather and severe storm threats in those regions, respectively," said Governor Abbott. "Texans are encouraged to remain resilient and heed the guidance of local officials to protect their loved ones, and we thank our emergency responders who are working to protect our communities this Holy Week."

There is a chance of thunderstorms in the Austin area Tuesday afternoon. Some thunderstorms may be severe, Zack Shields has the details.

The following state agencies sent representatives are working alongside TDEM:

Severe weather: Zack Shields explains what needs to happen for storms to be severe

Zack says some but not all the computer weather models are showing the lid on the atmosphere eroding and allowing storms to develop late in the day. He shows what that means by demonstrating with a can of soda.

Track your local forecast for the Austin area quickly with the free FOX 7 WAPP. The design gives you radar, hourly, and 7-day weather information just by scrolling. Our weather alerts will warn you early and help you stay safe during storms.