Our best chances for widespread rain remain Thursday and Friday, pending how this area of low pressure tracks. Saturday looks to be the "soggiest" of the long holiday weekend though thundershowers will be hit or miss. FOX 26 Meteorologist Lena Maria Arango explains.

As of the latest, Invest 95-L remains a broad area of low pressure with disorganized showers and thunderstorms out over open Gulf waters.

The "Invest" title simple means that the area of low pressure is being investigated for the possibility of development, which provides us with some pretty spaghetti plot models to look at. While the spaghetti plots give us a general idea of track, they are more so designed for organized storms with tropical characteristics.

There are two hurricane hunter flights scheduled for today to further investigate potential development of this system. 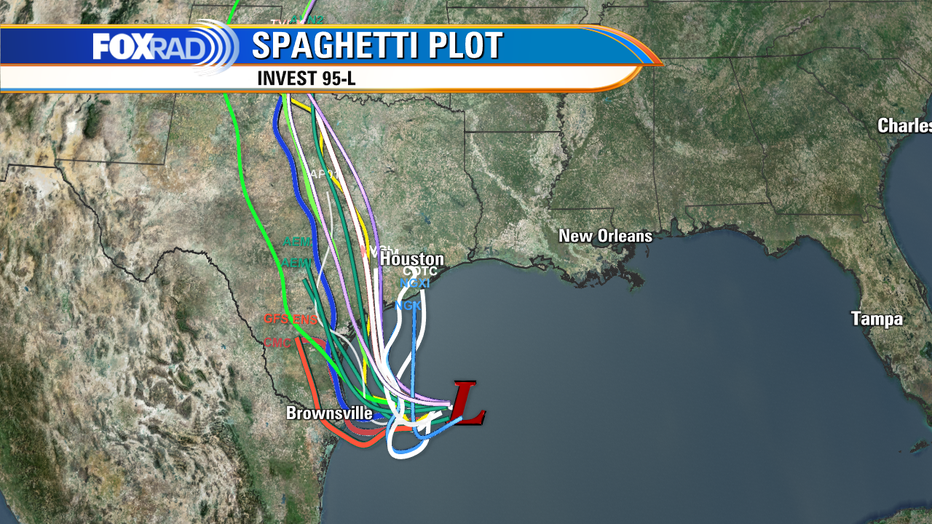 The track has tightened up some, with most models in agreement that this unnamed storm moves inland somewhere near the Matagorda Bay area or slightly southwest of that. The current potential for development in the next two to five days is still sitting at 40%.

It's unlikely that this gets named at any point, though the National Hurricane Center has stated that it may become a brief Tropical Depression (sustained winds to 39mph, no name) prior to pushing onto land. 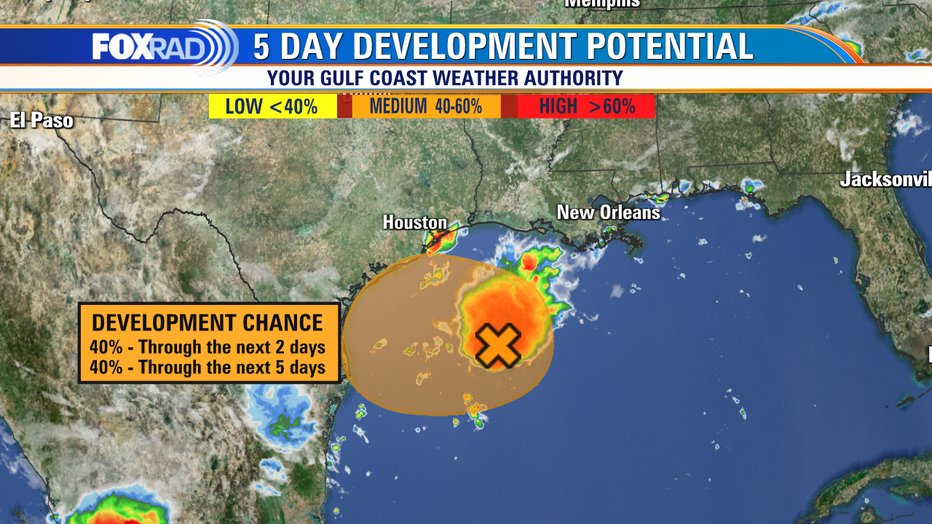 Organized or not, it brings drought-stricken Texas much welcomed beneficial rainfall. Exactly where, and how much that ends up being has yet to be determined. But this does look to simply be a rainmaker without any additional or destructive weather, which is always good news. 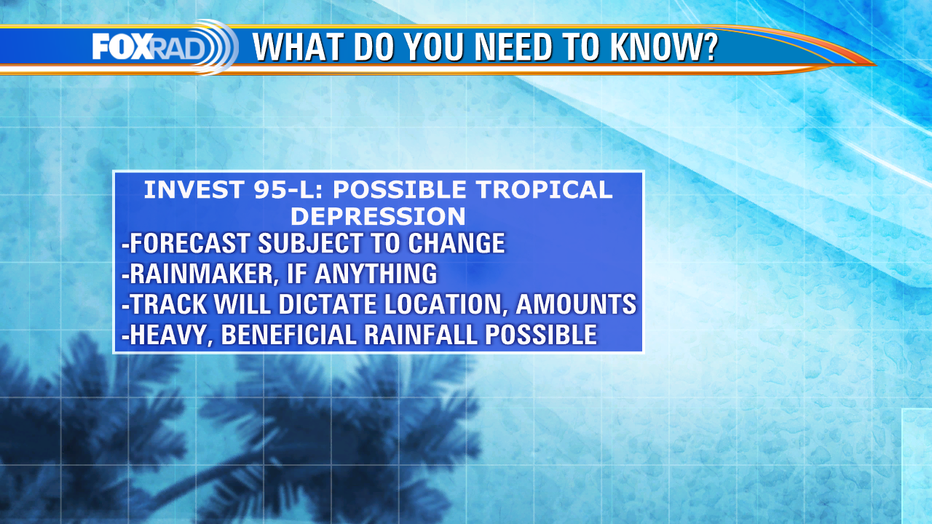 An early look at rainfall estimates from one of our models from Wednesday night to Friday night has most of our area picking up at least 1-2" with isolated higher amounts. If that Matagorda Bay-ish track verifies, amounts look to be highest southwest. Again, this is just one run of one model, and they have varied greatly over the last few days. Ultimately, this is a complex forecast, with a lot of moving parts. The general theme for now is less inland, and higher amounts likely along the coast. 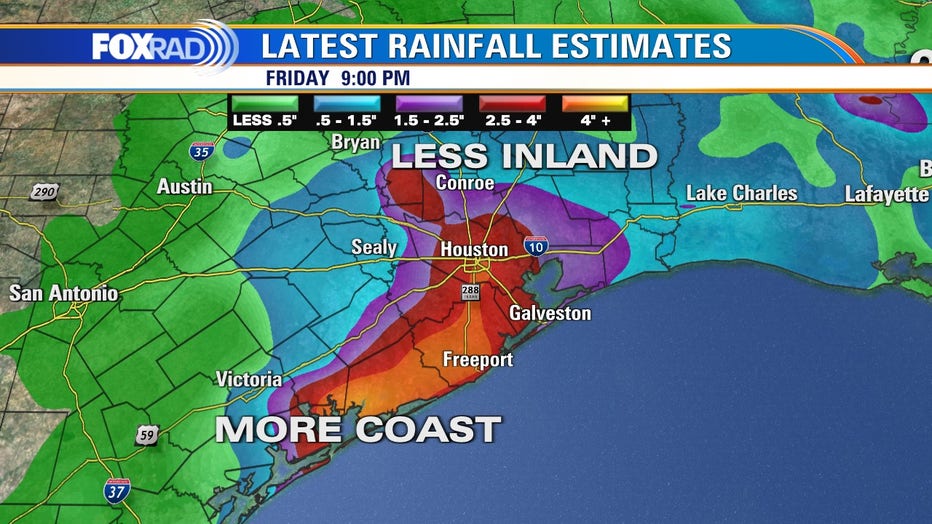 While these amounts are certainly manageable, especially with how dry it's been lately, heavy rainfall that falls over short periods of time could lead to some problem spots. It would be mainly low-lying, poor drainage areas or temporary localized street flooding/ponding on roadways. The current excessive rainfall outlook keeps those chances fairly low, about a 5% chance that it occurs within 25 miles of any one point. 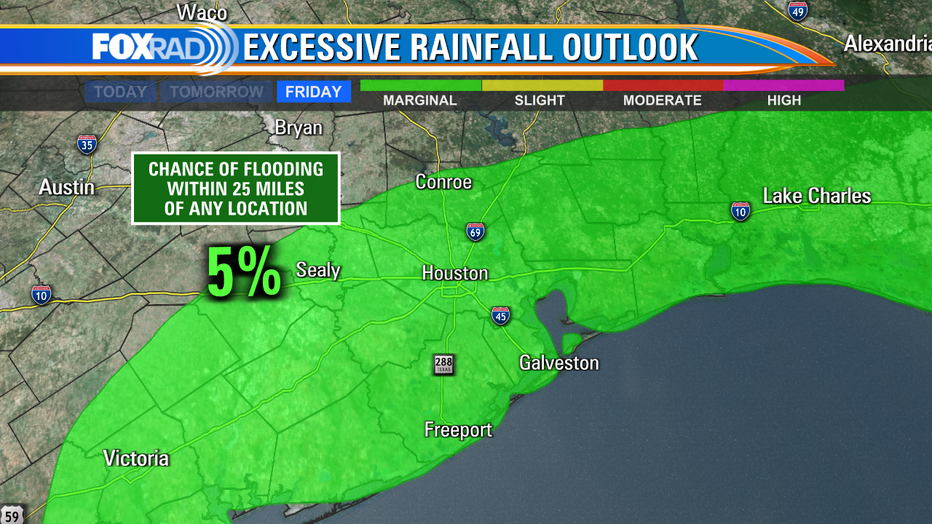 As mentioned, it has been extremely dry, so the ground should have no problem absorbing this all quickly. We take several inches of rainfall on the chin sometimes in the afternoons on a random summer day. Green lights across all the Bayous as well, so not expecting any major problems there either. Check back with us often for updates as we continue to monitor this developing situation closely.