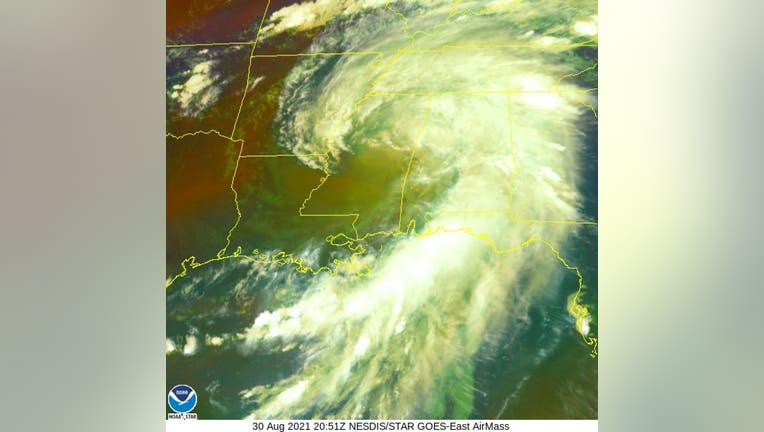 Ida is churning over Mississippi as a tropical depression Monday, after hitting Louisiana as a Category 4 hurricane on Sunday afternoon.

Ida knocked out power to all of New Orleans, blew roofs off buildings, and reversed the flow of the Mississippi River as it rushed from the Louisiana coast into one of the nation’s most important industrial corridors.

More than 1 million customers were without power in Louisiana, and over 40,000 were in the dark in Mississippi, according to PowerOutage.US, which tracks outages nationwide.

CenterPoint Energy said more than 200 employees and contractors from Houston and Indiana were headed to Louisiana on Monday to help restore power.

The hurricane was blamed for at least one death, a person killed by a fallen tree on a home in Prairieville, a suburb of Baton Rouge, Louisiana’s capital city. 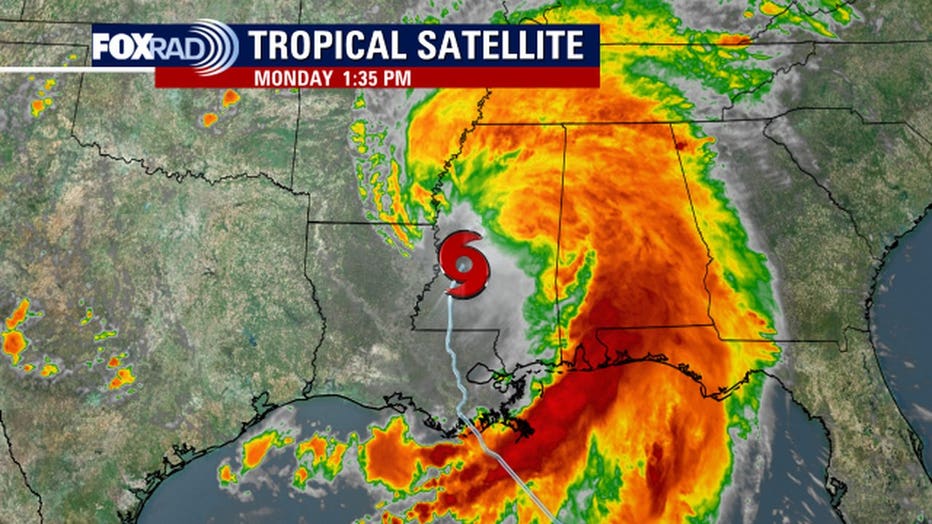 The major storm made landfall as one of the most powerful storms ever to hit the U.S., with maximum sustained winds of 150 mph.

The National Hurricane Center reports the system is moving toward the north-northeast near 9 mph, and this general motion is forecast to continue on Monday.

A faster northeastward motion is expected to begin by Monday night and continue on Tuesday.

On the forecast track, the center of Ida will move farther inland over western and central Mississippi on Monday afternoon.

Ida is then forecast to move over northeastern Mississippi on Monday night, move across the Tennessee Valley on Tuesday, and near the central Appalachians on Wednesday.

Maximum sustained winds have decreased near 35 mph with higher gusts.

HURRICANE IDA BY THE NUMBERS 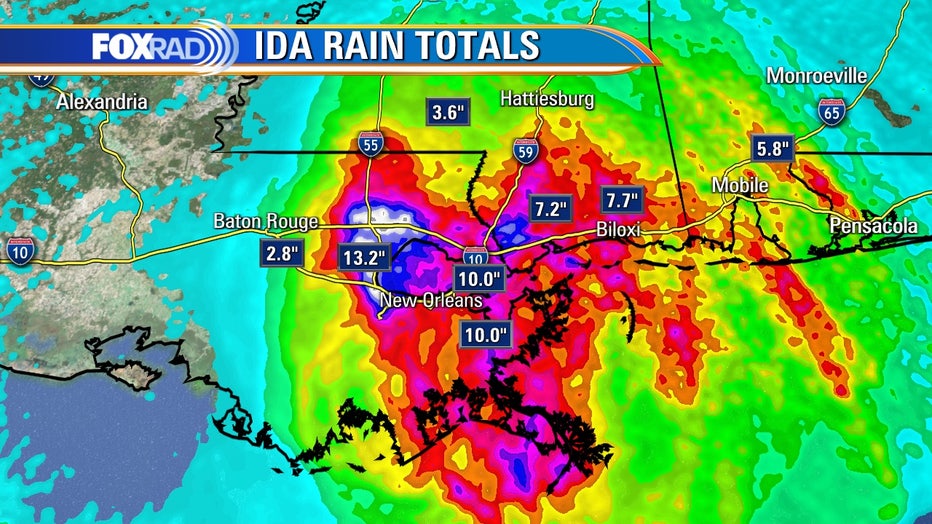 Areas around southeast Louisiana received more than a foot of rain.

In Mississippi, which is being pummeled by the storm Monday, rain totals have already reached near 8 inches.

Meteorologist Mike Iscovitz says there has also been incredible winds near and along the coast south of New Orleans.

A lifeboat docked at Port Fourchon actually measured a wind gust up to 172 miles per hour. 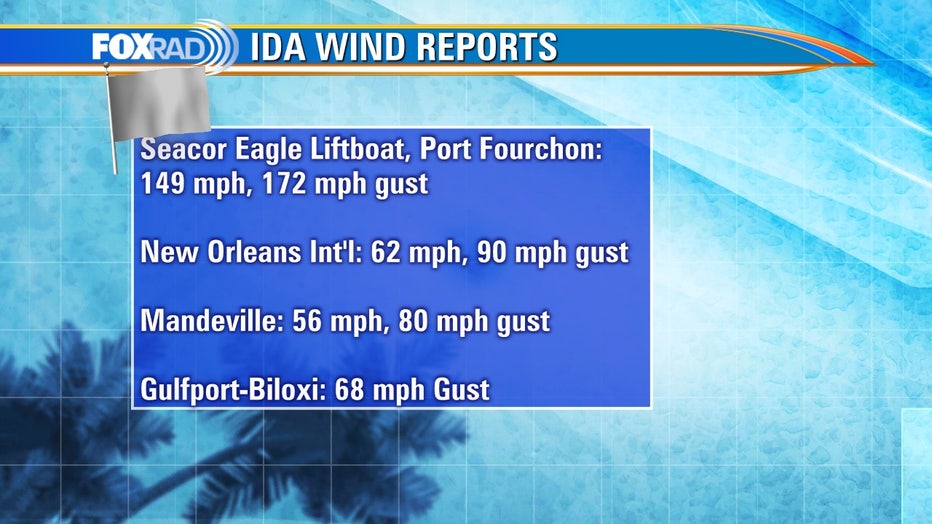 Ida’s 150-mph winds tied it for the fifth-strongest hurricane to ever hit the mainland U.S. It dropped hours later to a Category 1 storm with maximum winds of 95 mph as it crawled inland, its eye about 45 miles northwest of New Orleans.

The Category 4 storm made a second landfall near Galliano. The hurricane was churning through the far southern Louisiana wetlands, with the more than 2 million people living in and around New Orleans and Baton Rouge under threat.

The region getting Ida’s worst is an area that is already reeling from a resurgence of COVID-19 infections due to low vaccination rates and the highly contagious delta variant.

New Orleans hospitals planned to ride out the storm with their beds nearly full, as similarly stressed hospitals elsewhere had little room for evacuated patients. And shelters for those fleeing their homes carried an added risk of becoming flashpoints for new infections.

Hurricane Ida roared through earlier Sunday and just slammed Louisiana with heavy rain at almost 150 miles an hour and just when things couldn't get bleaker, officials say, all of New Orleans is now without power.

Comparisons to the Aug. 29, 2005, landfall of Katrina weighed heavily on residents bracing for Ida. Katrina was blamed for 1,800 deaths as it caused levee breaches and catastrophic flooding in New Orleans.

Ida’s hurricane-force winds stretched 50 miles from the storm’s eye, or about half the size of Katrina, and a New Orleans’ infrastructure official emphasized that the city is in a "very different place than it was 16 years ago."

The levee system has been massively overhauled since Katrina, Ramsey Green, deputy chief administrative officer for infrastructure, said before the worst of the storm hit. While water may not penetrate levees, Green said if forecasts of up to 20 inches of rain prove true, the city’s underfunded and neglected network of pumps, underground pipes and surface canals likely won’t be able to keep up.

There's now concern of a "nightmare scenario" for gas prices, as Port Fourchon helps to produce around 18% of the U.S. oil supply. The port also has a role in 90% of the Gulf of Mexico's deepwater oil production and is a base for more than 250 companies.

The Louisiana Department of Environmental Quality was in contact with more than 1,500 oil refineries, chemical plants and other sensitive facilities and will respond to any reported pollution leaks or petroleum spills, agency spokesman Greg Langley said. He said the agency would deploy three mobile air-monitoring laboratories after the storm passes to sample, analyze and report any threats to public health.

Louisiana’s 17 oil refineries account for nearly one-fifth of the U.S. refining capacity and its two liquefied natural gas export terminals ship about 55% of the nation’s total exports, according to the U.S. Energy Information Administration. Government statistics show that 95% of oil and gas production in the Gulf Coast region was shut down as Ida made landfall on Sunday, according to energy company S&P Global Platts.

Louisiana is also home to two nuclear power plants, one near New Orleans and another about 27 miles northwest of Baton Rouge.

VISIT OUR TROPICS PAGE FOR THE LATEST RADARS

President Joe Biden approved emergency declarations for Louisiana and Mississippi ahead of Ida’s arrival. He said Sunday the country was praying for the best for Louisiana and would put its "full might behind the rescue and recovery" effort once the storm passes.

Edwards warned his state to brace for potentially weeks of recovery.

"Many, many people are going to be tested in ways that we can only imagine today," the governor told a news conference.

Many are stepping up to help the victims of the major storm, including Houston's Mattress Mack, who is collecting donations to send 30 truckloads to Louisiana.

The Cajun Navy, which has responded to several storms, is also mobilizing to the hard-hit areas.

There are also national organizations who are giving aid and accepting donations, including The American Red Cross, The Salvation Army, and various animal rescues.

For ways you can help the victims of Hurricane Ida, click here.

FOX 26 Houston is your Gulf Coast Weather Authority and we will continue to update this story as we learn more information about this storm.