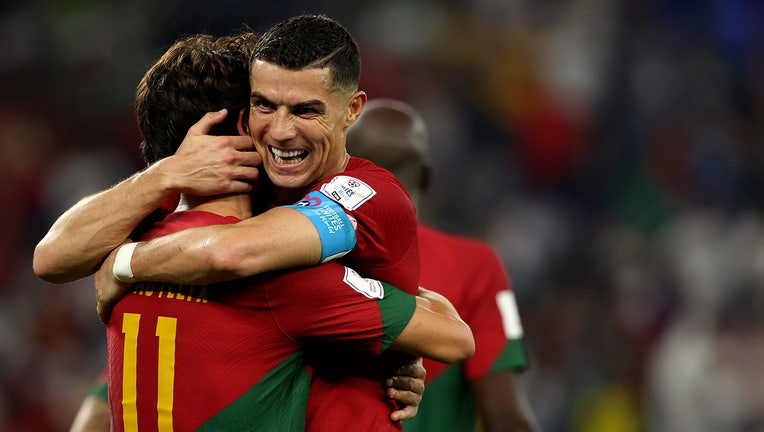 Joao Felix of Portugal celebrates after scoring a goal to make 2-1 with Cristiano Ronaldo of Portugal during the FIFA World Cup Qatar 2022 Group H match between Portugal and Ghana at Stadium 974 on November 24, 2022 in Doha, Qatar. (Photo by Matthew

DOHA, Qatar - Two of the best players in soccer are back in World Cup competition Thursday. Cristiano Ronaldo made history, while Neymar is up next in Qatar.

Neymar has been deliberately quiet since arriving, with his only public statement a social media post with a sixth star photoshopped onto his shorts around Brazil’s logo — a clear indicator his only goal is another World Cup title for his country.

"This is our dream," Brazil forward Richarlison said. "Neymar posted that photo because it’s his dream, too. He wants to win that and we know how willing he is to win that. He can do whatever he wants. It’s his dream. If Neymar is happy here, we will be happy. That’s the most important thing."

Neymar has five goals in six games this year for Brazil, all on penalty kicks.

Serbia has yet to advance out of the group stage in three previous World Cup appearances as an independent nation. It has also failed to qualify for the European Championship in five tries. 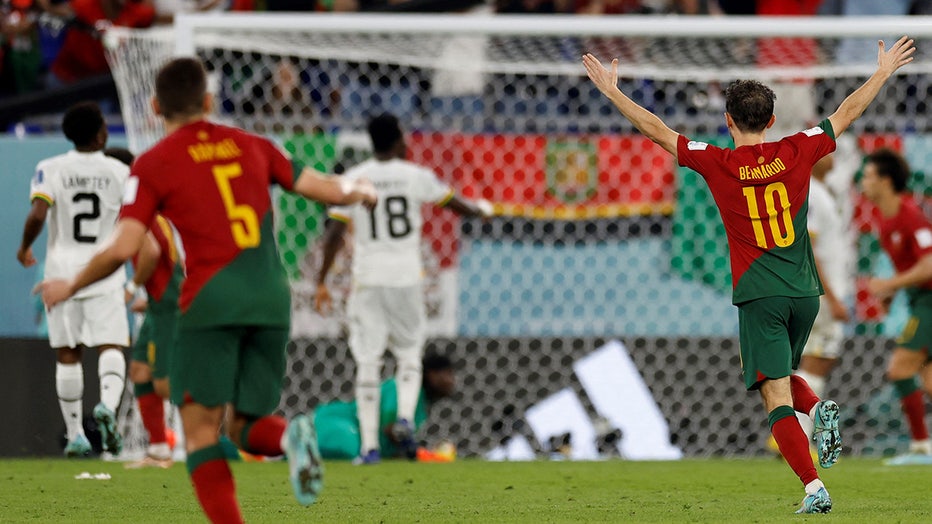 Cristiano Ronaldo closed his eyes, took in a deep breath and then made World Cup history.

The Portugal striker became the first male player to score at five World Cups with his 65th-minute penalty in a 3-2 win over Ghana on Thursday.

Andre Ayew equalized for Ghana eight minutes later, but Joao Felix regained the lead for Portugal in the 78th and Rafael Leao added a third. Osman Bukari reduced Ghana's deficit in the 89th.

The 37-year-old Ronaldo was looking to showcase his talents to potential new clubs after having his contract terminated at Manchester United this week. After wasting two good chances in the first half, he tumbled under a challenge by Ghana defender Mohammed Salisu to earn a penalty.

Wheeling away after the ball struck the back of the net, a smiling Ronaldo performed his usual leap and swivel in the air — the crowd roared his trademark "SI-UUU" as he did the pirouette — before getting mobbed by teammates.

He has now scored in every World Cup since his first in 2006 and has a record 118 international goals. 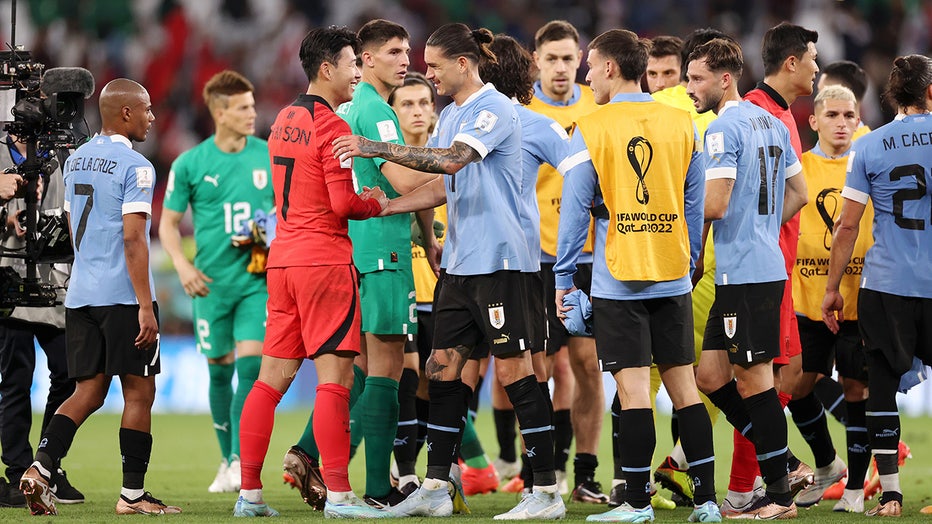 Heungmin Son of Korea Republic shakes hands with Darwin Nunez of Uruguay after the 0-0 draw during the FIFA World Cup Qatar 2022 Group H match between Uruguay and Korea Republic at Education City Stadium on November 24, 2022 in Al Rayyan, Qatar. (Pho

South Korea and Uruguay started their World Cup campaigns with a 0-0 draw on Thursday, a result that probably favors the Asian team.

The draw at Education City Stadium was yet another early World Cup match with the favored team stumbling. Argentina and Germany both lost their opening matches in major upsets.

South Korea, with forward Son Heung-min wearing a mask to protect a broken left eye socket, always looked the more likely team to score against the more experienced Uruguayans. The South Koreans were quicker, pressing from the opening whistle.

However, in a match with few clear scoring chances, Uruguay had best chances: Diego Godin hit the post in the 43rd minute and Federico Valverde hit it in the 89th.

Uruguay will next face Portugal in Group H while South Korea plays Ghana. 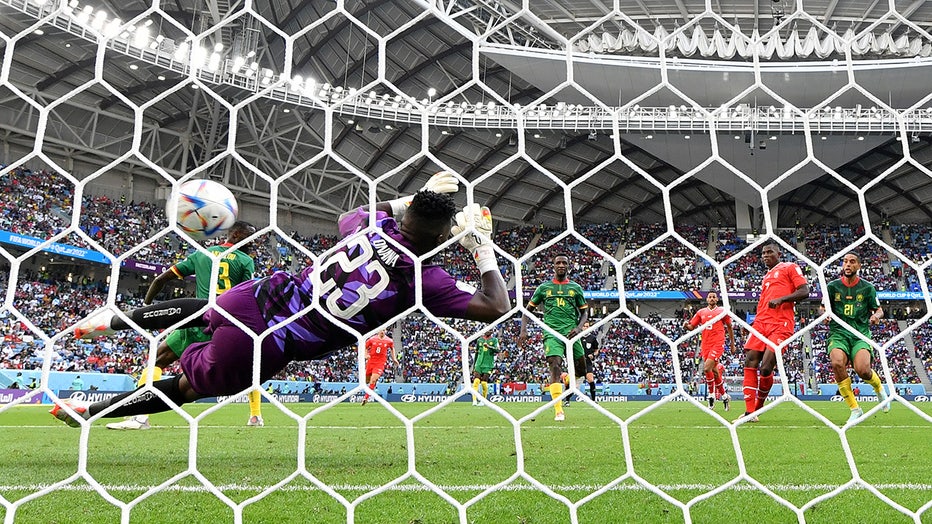 Breel Embolo of Switzerland scores their team's first goal past Andre Onana of Cameroon during the FIFA World Cup Qatar 2022 Group G match between Switzerland and Cameroon at Al Janoub Stadium on November 24, 2022 in Al Wakrah, Qatar. (Photo by Claud

Breel Embolo’s goal lifted Switzerland to a 1-0 win over Cameroon at the World Cup on Thursday and he kept his promise not to celebrate scoring against the country where he was born.

The Swiss forward from Yaounde struck with a right-foot shot in the 48th minute, standing all alone eight meters (yards) out in the middle of the goalmouth to take Xherdan Shaqiri’s low pass.

Embolo then pursed his lips in a wry smile and held his arms out wide, before raising his hands in a gesture of apology as teammates rushed to him near the penalty spot.

He pointed toward Swiss fans behind the goal where he had scored then to Cameroon fans at the opposite corner of Al Janoub stadium.

The 25-year-old forward left Cameroon with his family when he was five. They spent time in France before settling in Switzerland, the country he is now representing at a second World Cup.

Though an African-born player scored, teams from Africa are now scoreless through the four games they have played at this World Cup. All have played higher-ranked teams, and Morocco and Tunisia earned 0-0 draws, respectively against Croatia and Denmark.

Cameroon’s streak of losses at World Cup finals tournaments extended to eight games dating back to 2002.

In the 73rd minute, the striker used one touch to get the ball up in the air and then spun around and got off the ground before knocking the ball into the net with his right foot.

Brazil had struggled to get past the Serbian defense until Richarlison scored from close range in the 62nd in a buildup that started with Neymar.

Vinícius Júnior assisted on both goals.