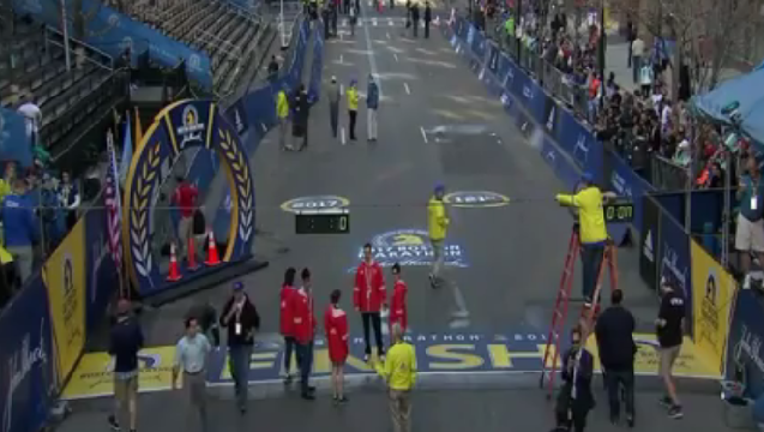 BOSTON (AP) - Among men, Kenya's Geoffrey Kirui has won the Boston Marathon -- his first marathon victory ever. Kirui outran Galen Rupp of the U.S. to take Monday's 121st running of the race in an unofficial time of 2 hours, 9 minutes, 36 seconds. He took seventh in last year's Amsterdam Marathon and third at Rotterdam. Rupp finished unofficially in 2 hours, 9 minutes, 58 seconds.

Among women, Kenya's Edna Kiplagat wins the Boston Marathon in her debut. The two-time world champion has also won marathons in London, New York City and Los Angeles. Rose Chelimo of Bahrain was second, 59 seconds behind and American Jordan Hasay was third in her marathon debut. Desi Linden, who was second in Boston by 2 seconds in 2011, finished fourth -- the first time since 1991 that two U.S. women have finished in the top four.

The times are now official in the wheelchair races. Manuela Schar of Switzerland finished in 1 hour, 28 minutes, 17 seconds -- shattering the world best by more than five minutes. Fellow Swiss Marcel Hug took the men's race in 1:18:04, also the fastest time ever. The winners' times are considered a world best and not a world record. The straight-line Boston course doesn't qualify for world records because of the possibility of a supportive tailwind like the one on Monday.