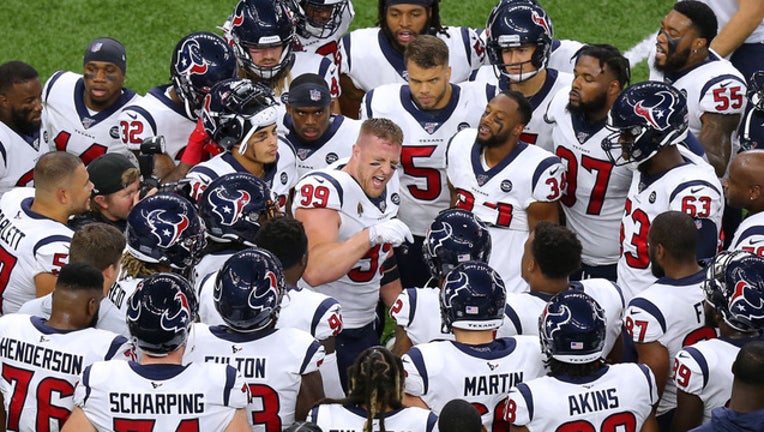 J.J. Watt #99 of the Houston Texans gives the team a pep talk before a game against the New Orleans Saints at the Mercedes Benz Superdome on September 09, 2019 in New Orleans, Louisiana. (Photo by Jonathan Bachman/Getty Images)

NEW ORLEANS (AP) - Deshaun Watson and the Houston Texans appeared poised several times to open the season with a victory over the favored New Orleans Saints in the Superdome.

J.J. Watt laid the blame on the defense for letting it get away.

Houston led 14-3 at halftime, 21-10 in the third quarter and 28-27 with 37 seconds left, only to let the Saints pull out a dramatic victory on a last-second field goal.

Watson had turned in a memorable performance, and his third touchdown pass gave the Texans a last-minute lead. But Drew Brees completed three straight passes and Wil Lutz drilled a 58-yard kick as time ran out to hand Houston a frustrating 30-28 loss.

"That's on us," Watt said of the Texans defense. "There's a lot of things that are on us. To hold them to three points in the first half and then give up 27 in the second, that's just terrible. And for our offense to give us the lead with 40 seconds left, or whatever it was, and not win the game, we'll take 100 percent of that blame, as we should."

The Saints scored touchdowns on their first three possessions of the second half, punted only once after the break and added two field goals in the final minute.

Lutz's winning kick spoiled a huge night from Watson, who ran for a 21-yard touchdown on a fourth-down play and completed 20 of 30 passes for 268 yards. His final two passes were perfect strikes to DeAndre Hopkins for 38 yards and former Saints receiver Kenny Stills on a 37-yard post pattern as the Texans went 75 yards in 13 seconds to take one last late lead.

"As long as we can keep it within range, we are in every game, and that's what Deshaun Watson gives us," Texans coach Bill O'Brien said. "He's a great player, he's competitive, he's calm and he's poised. He's got all that."

Hopkins had eight catches for 111 yards and two touchdowns.

The Texans also ran for 180 yards, more than the Saints allowed in any game last season. Carlos Hyde, picked up in a trade with the Kansas City Chiefs at the end of August, had 83 yards on 10 carries.

It wasn't quite enough in New Orleans.

"Every loss is tough," Watson said. "Getting blown out, losing by 14 or losing on a last-second field goal is very tough. That's football. You've got to give that kicker props. He did a great job for them."

Converting six consecutive third downs, Houston scored touchdowns on three consecutive drives spanning the end of the first half and the start of the third quarter. The streak ended when Saints safety Marcus Williams intercepted Watson's lofted pass down the sideline for William Fuller.

The Texans gave up four sacks on their next two possessions, leading to punts.

"We have to shore some things up," O'Brien said. "They got us on a couple of blitzes. We did block them at times, but we have to block them more consistently and the ball has to come out a little quicker at times."

Watt did not want to hear anything about the offense's shortcomings. Double-teamed constantly, the three-time NFL Defensive Player of the Year did not have a tackle or an assist for only the second time in his nine-year NFL career.

"It's very frustrating, but that's something you have to deal with when you're in the position I'm in," he said. "You've got to find a way to get there, and tonight I didn't. I take that on me. We'll feel the emotions of this for 24 hours, then we'll move on to Jacksonville, but right now it does hurt."