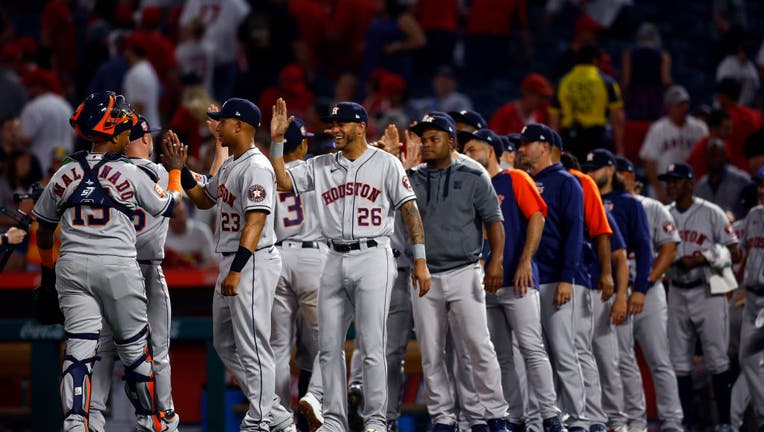 ANAHEIM, CALIFORNIA - APRIL 07: The Houston Astros celebrate a 3-1 win against the Los Angeles Angels in the ninth inning on Opening Day at Angel Stadium of Anaheim on April 07, 2022 in Anaheim, California. (Photo by Ronald Martinez/Getty Images)

ANAHEIM, Calif. - Shohei Ohtani was outstanding for five innings on the mound, and he looked dangerous all night at the plate.

Framber Valdez and his Houston Astros were just a bit better everywhere while extending a remarkable decade of opening day dominance.

Valdez outpitched Ohtani with 6 2/3 innings of two-hit ball, and the Astros tied the longest opening day winning streak in major league history with a 3-1 victory over the Los Angeles Angels on Thursday night.

Alex Bregman had an early RBI single and a late homer as the Astros won their 10th straight season opener. That matches the mark posted in the late 19th century by the Boston Beaneaters — now the Atlanta Braves.

Valdez (1-0) was nearly untouchable in the late-blooming lefty’s first career start in April, striking out six. He retired 15 straight Angels after Matt Duffy’s single in the second, and exited only after Duffy’s soft infield single in the seventh. 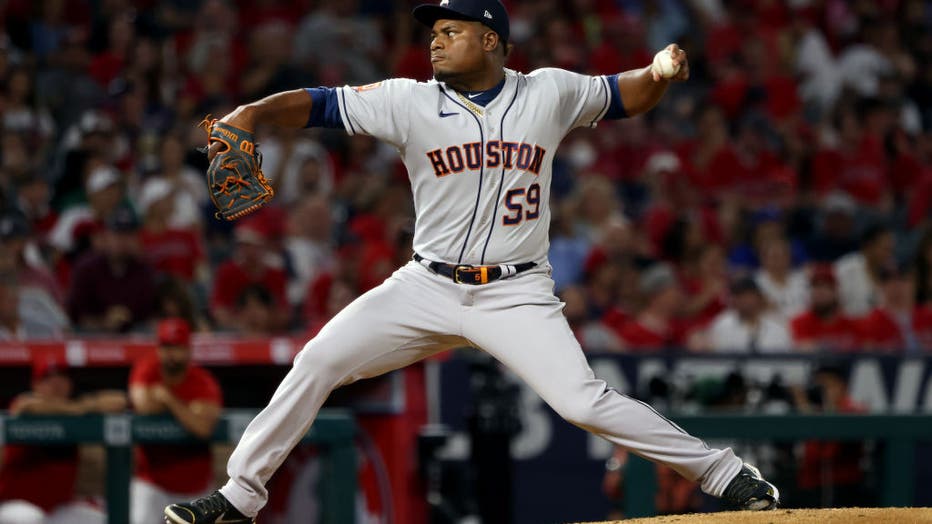 ANAHEIM, CA - APRIL 07: Framber Valdez #59 of the Houston Astros pitches during the game between the Houston Astros and the Los Angeles Angels at Angel Stadium on Thursday, April 7, 2022 in Anaheim, California. (Photo by Katelyn Mulcahy/MLB Photos vi

"That guy, he’s a beast," Houston catcher Martín Maldonado said. "He goes out there and he doesn’t talk too much. He just executes pitches."

Valdez’s lead still nearly slipped away in the seventh when Anthony Rendon missed a go-ahead homer by inches down the left-field line.

"When I saw the ball flying in the air, I got mad with myself that I didn’t make my best pitch," said Valdez, who got Rendon to ground into a double play on the next pitch. "I just took a deep breath and threw my best pitch."

Houston manager Dusty Baker had a different perspective on Rendon’s fly: "We were all blowing that ball foul."

Ohtani (0-1) struck out nine while pitching one-run ball into the fifth inning for the Angels, who lost their season opener for the eighth time in nine years. Last season’s AL MVP went 0 for 4 at the plate while taking advantage of baseball’s offseason rule change allowing him to remain the designated hitter after he finishes pitching.

Michael Brantley doubled and scored on Bregman’s single off Ohtani in the third. Bregman and Yordan Alvarez then homered off new Angels reliever Ryan Tepera in the eighth.

Los Angeles finally scored in the eighth when Alvarez couldn’t make a diving stab of David Fletcher’s two-out triple to left, but Hector Neris retired Ohtani on a high fly to right.

"The last at-bat, I thought it might have a chance," Ohtani said through a translator. "Overall, I’m pretty satisfied with how I felt at the plate, even though the results weren’t there."

RELATED: Tiger Woods: A look at the long road back to the Masters following car crash

Ohtani was impressive in his first career opening day start on the mound, particularly against Altuve: Ohtani struck out the Astros star three times, getting him with a nasty slider on his 80th and final pitch.

"I feel like I could have been better," Ohtani said.

Ohtani became only the fourth pitcher to fan Altuve thrice in a game, but manager Joe Maddon pulled Ohtani early to preserve his arm after an abbreviated spring.

"Shohei, once again, nothing is too big for him," Maddon said. "Nothing is too quick for him. I thought he looked really good. ... I loved our effort. I loved everything about us today."

Mike Trout went 1 for 4 with a ninth-inning single in the three-time AL MVP’s first game since missing the final 4 1/2 months of last season with an injured calf.

Rendon went 0 for 4 and made two stellar defensive plays in the $245 million third baseman’s first appearance since last July 4.

After Rendon flied out with Trout on base in the ninth, Ryan Pressly got Tyler Wade to ground into a game-ending double play, earning the save several hours after the Houston closer agreed to a $30 million, two-year contract.

The sturdy Astros showed off their balanced roster while extending their remarkable run of opening day success. The streak was started in 2013 by a Houston team that went on to lose 111 games, and it continued through the franchise’s rise and current renaissance of five straight AL Championship Series appearances, three pennants and one World Series title.

Los Angeles put OF Taylor Ward on the 10-day injured list with a left groin strain incurred during an exhibition game Tuesday. Ward would have been the opening day starter in right field.

Angels rookie left-hander Reid Detmers makes his season debut against Houston right-hander Jake Odorizzi. Detmers, the most promising pitcher yet in Los Angeles’ string of prospects from its long-struggling farm system, is swapping rotation spots with Patrick Sandoval, who will pitch Tuesday after resting his tired arm.