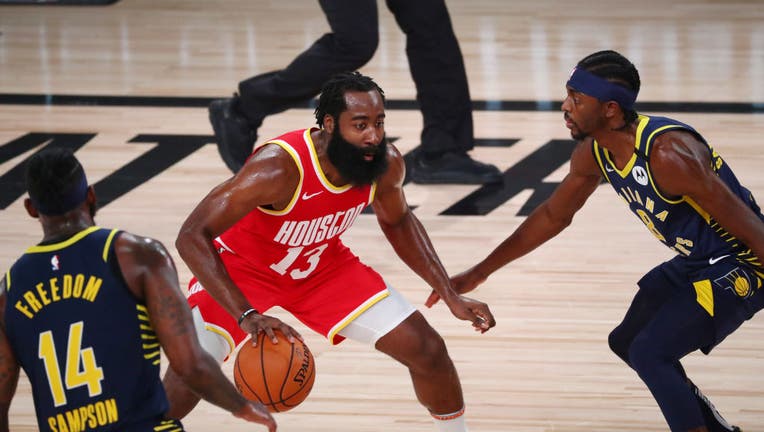 LAKE BUENA VISTA, FLORIDA - AUGUST 12: James Harden #13 of the Houston Rockets dribbles the ball between JaKarr Sampson #14 and Justin Holiday #8 of the Indiana Pacers in the first quarter at AdventHealth Arena at ESPN Wide World Of Sports Complex on

LAKE BUENA VISTA, Fla. - Myles Turner had 18 points, reserve Edmond Sumner added a season-high 17 and Indiana held off a late rally by Houston and James Harden to break a five-game losing streak to the Rockets, 108-104 on Wednesday.

Harden had 11 of Houston's 14 points during the surge.

But after Victor Olidipo missed a 3-pointer, Turner tipped out the rebound to Justin Holliday with six seconds left. Holiday hit two foul shots to finish off Indiana's first victory over Houston since February 2017.

Harden could not get off a final 3-pointer before the buzzer sounded. The Rockets have lost two straight for the first time since the NBA restarted the season.

Harden had 45 points and tied his career-high with 17 rebounds. He came an assist shy of his fifth triple-double this season. It was Harden's 21st game this season with 40 points or more.

Holiday also has 18 points for the Pacers. Olidipo and Doug McDermont had 16 points apiece. Turner led the Pacers with 12 rebounds.

Jeff Green had 14 points for Houston. The Rockets struggled from the outside, going just 16 of 57 on 3-pointers.

TIP-INS
Pacers: Coach Nate McMillan was rewarded with a one-year extension to his contract that was set to expire after next season. ... Malcolm Brogdon, who had 12 points in Monday's loss to Miami, sat out against Houston with a sore neck.

Rockets: Russell Westbrook was diagnosed with a strained quadriceps muscle in his right leg and will miss Friday's regular-season finale. He did not play against Indiana. Westbrook will be reevaluated before the playoffs. ... Houston had not lost consecutive games since dropping four straight in March before the pandemic shut down the NBA.

UP NEXT
Pacers: Play Miami on Friday.
Rockets: Play Philadelphia on Friday.