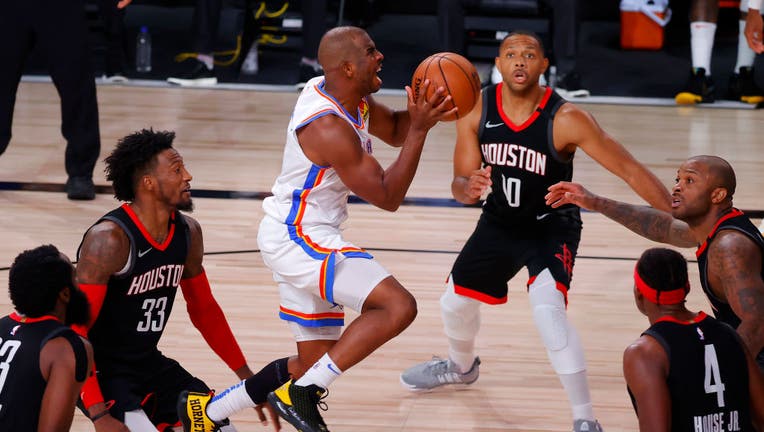 LAKE BUENA VISTA, FLORIDA - AUGUST 24: Chris Paul #3 of the Oklahoma City Thunder goes up for a shot against the Houston Rockets during the second quarter in Game Four of the Western Conference First Round during the 2020 NBA Playoffs at AdventHealth

LAKE BUENA VISTA, Fla. - Dennis Schroder scored a career playoff-high 30 points and the Oklahoma City Thunder rallied from 15 points down in the third quarter to beat the Houston Rockets 117-114 on Monday to even the first-round Western Conference playoff series at two wins apiece.

Chris Paul scored 26 points and Shai Gilgeous-Alexander added 18 points and 12 rebounds for the Thunder, who won despite allowing 23 3-pointers.

James Harden had 32 points, 15 assists and eight rebounds for Houston. Eric Gordon scored 23 points and Danuel House added 21 for the Rockets, who won the first two games of the series.

Former Thunder star Russell Westbrook sat out for Houston again with a strained right quad. The All-Star point guard has not played in the series.

Houston made its first eight 3-pointers to start the third quarter. The Rockets led 93-80 before Schroder made a 3-pointer and Houston’s Austin Rivers was called for a foul away from the shot. Oklahoma City’s Nerlens Noel made the free throw, and that sequence sparked a 12-0 run for the Thunder. Schroder hot a deep 3-pointer at the buzzer, and the Oklahoma City climbed within 93-92 at the end of the third.

Harden made a 3-pointer with 16.3 seconds to play to cut Oklahoma City’s lead to 113-111, but Schroder made two free throws with 15.8 seconds to go to give the Thunder control for good.