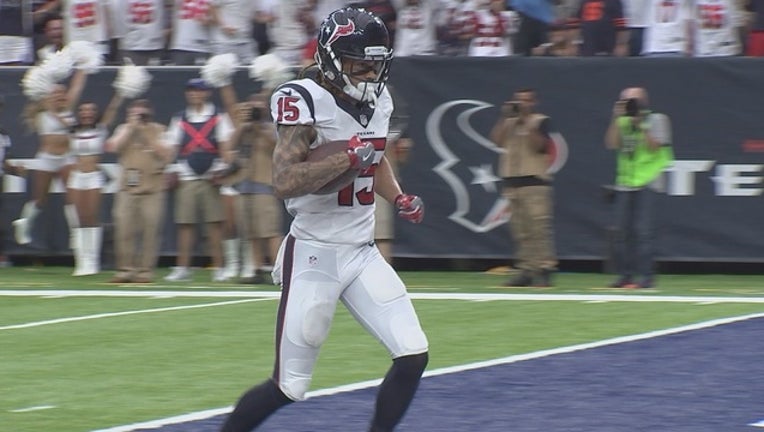 HOUSTON (AP) - Brock Osweiler threw for 231 yards and two touchdowns in his debut with Houston to lead the Texans and their revamped offense to a 23-14 win over the Chicago Bears on Sunday.

Osweiler, who signed to a $72 million contract from Denver in the offseason, was helped by an offense filled with playmakers.

He completed passes to eight different receivers, led by rookie first-round pick Will Fuller, who became the first player in franchise history to have 100 yards receiving in a debut with 107 and a touchdown. DeAndre Hopkins added 54 yards and a score and running back Lamar Miller had 106 yards rushing in his first game with the Texans.

Osweiler's day started with a hiccup when he threw an interception on the first drive, but soon got going and looked comfortable after that.

Houston trailed by 1 point entering the fourth quarter before Osweiler found Fuller on a short pass and he scampered 18 yards for a touchdown to make it 20-14. The Texans added a 38-yard field goal later in the quarter to make it 23-14.

Chicago's Jay Cutler threw for 216 yards with a touchdown and an interception, but was also sacked five times and hurried several others on a day when linebackers Whitney Mercilus and 2014 top overall pick Jadeveon Clowney led the pass rush.

J.J. Watt didn't seem to be limited in his return after sitting out all of the preseason after back surgery. But last year's Defensive Player of the Year wasn't as effective as he normally is, and seemed to have a tough time dealing with three-time Pro Bowl left guard Josh Sitton.

Sitton was signed by the Bears last week after being a surprise cut by Green Bay.

Houston middle linebacker Brian Cushing, who had 110 tackles last season, injured his knee in the first quarter and did not return. Cushing started every game last season and 14 in 2014 after playing just 12 games combined in the previous two seasons because of two significant injuries to his left knee.

Bears receiver Kevin White, the seventh overall pick in the 2015 draft, made his debut on Sunday after missing all of last season with a stress fracture in his left shin. He showed of flashes of the game-breaking ability that made him a top-10 pick and finished with 34 yards receiving. But his inexperience cost the Bears when he appeared to run a wrong route that led to an interception early in the third quarter.

IS IT THE SHOES?

He and two other Adidas players received the 350's on Friday, a day after Von Miller wore the high-top Yeezy Boost 750's in Denver's game against Carolina.

Hopkins told The Associated Press on Friday that the shoes in the popular turtle dove colorway "feel just the same as my (regular) cleats if not a little bit better."

The star receiver, who was second in the NFL with a career-high 1,521 yards receiving last season, compared his ones to those that Miller wore, which look more like a boot.