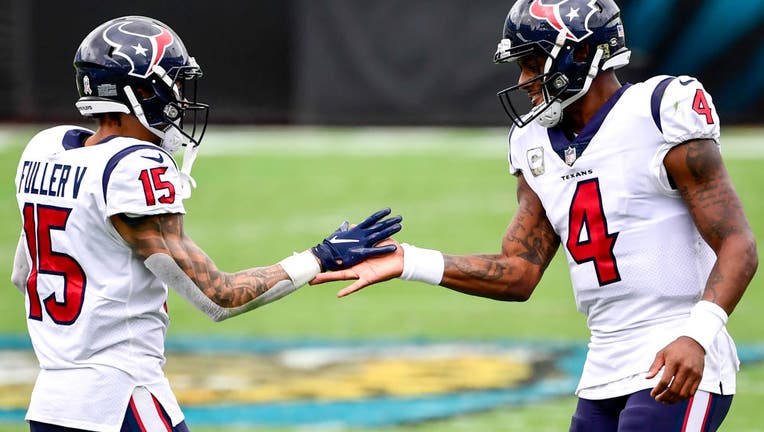 JACKSONVILLE, FLORIDA - NOVEMBER 08: Will Fuller #15 of the Houston Texans and Deshaun Watson #4 reacts after a touchdown during the second half against the Jacksonville Jaguars at TIAA Bank Field on November 08, 2020 in Jacksonville, Florida. (Photo

HOUSTON - Houston stars J.J. Watt and Will Fuller were both the subject of trade rumors leading up to last Tuesday’s deadline after the team’s terrible start cost coach Bill O’Brien his job.

In the end, both players ended up staying put and both made big contributions to the Texans’ second victory.

At 2-6 halfway through the season after Sunday’s 27-25 win over the Jaguars, the Texans certainly aren’t where they’d like to be. But with Fuller, Watt, and quarterback Deshaun Watson they’re optimistic that they can play much better in the second half of the season.

Watt had two tackles, two quarterback hits and his strip-sack of Jake Luton forced the Jaguars to punt in the fourth quarter.

Fuller had five receptions for 100 yards on Sunday, highlighted by a 77-yard TD catch in the third quarter, which was the longest play of his career.

Watson has had to adjust to playing without DeAndre Hopkins this season after he was traded to Arizona in March. He shuddered to think of how things would have been for him if the team had dealt Fuller, too.

Fuller, who has spent his entire career in Houston after being drafted in the first round in 2016, admitted that hearing his name in trade rumors was upsetting.

“Giving this organization my all and coming to work every day, I’m a very unselfish player and do everything they asked,” he said. “To be shopped around, I did feel a certain type of way (but) I am happy to be here and to play with Deshaun and to continue to try to get wins with this organization.”

Watson’s stellar play continues to make Houston’s passing game the strength of the team. The fourth-year player has thrown eight touchdown passes with no interceptions in the past three games and ranks seventh in the NFL with 2,376 yards passing. He’s the first player in franchise history to throw for at least 250 yards and one touchdown in each of the team’s first eight games.

Houston is still searching for an effective running game with the team ranked 31st in the NFL by averaging just 87.6 yards rushing a game. The Texans had 107 yards rushing against the Jaguars. But the running backs managed just 57 yards rushing and Watson gained the rest of the yards scrambling.

Watt’s strip-sack gave him 100 sacks. Watt is the first Texan to reach the mark and the 35th player in NFL history. He did it in his 120th game, joining DeMarcus Ware, Reggie White and Bruce Smith as the only players to have 100 sacks in their first 120 games.

“J.J. is a tremendous athlete and a tremendous pro,” interim coach Romeo Crennel said. “In my time here with J.J., he has done a little bit of everything. He intercepts balls. He causes fumbles. He tackles in the backfield. He invades the run and rushes the passer. He does it all.”

Bradley Roby didn’t make the trip to Jacksonville this weekend for an undisclosed reason that the team said was not injury or COVID-19-related, leaving the Texans without their top cornerback. Crennel wouldn’t say why Roby didn’t travel with the team, but said he expects him to return this week.

LB Brennan Scarlett fractured a forearm on Sunday and Crennel isn’t sure if he’ll be able to return this season. ... RB David Johnson and guard Senio Kelemete both sustained concussions on Sunday and will likely miss Sunday’s game. ... LB Jacob Martin, who missed the game after testing positive for COVID-19 last week, is likely to miss Sunday’s game as well. ... Crennel said LBs Whitney Mercilus and Dylan Cole were expected to return this week after they had to sit out against the Jaguars after contract tracing found that they had been in close contact with Martin. ... OL Max Scharping is also expected to return to the facility this week after testing positive for the coronavirus two weeks ago and could fill in for Kelemete against the Browns.

1 — The Texans scored a touchdown on their first possession for the first time this season on Sunday when Watson connected with Brandin Cooks on a 57-yard score.

The Texans played well enough to beat the struggling Jaguars on Sunday, but will need to do much more this week if they hope to compete with Cleveland. Crennel is looking for ways to generate more of a running game and hopes that the return of Roby will help eliminate some of the big passing plays Houston has allowed in its past two games.