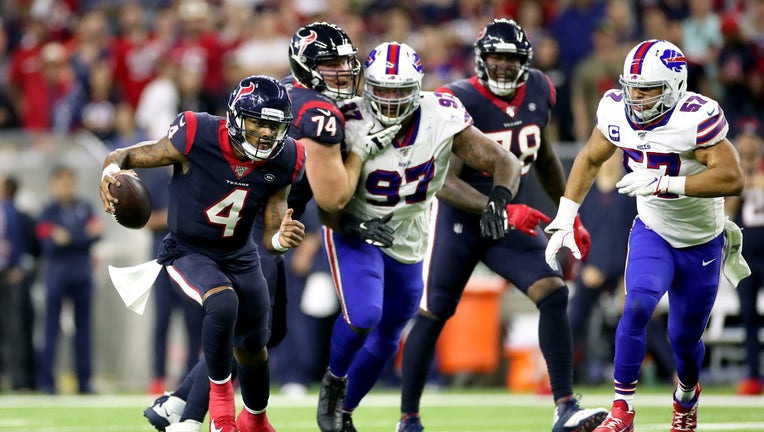 HOUSTON, TEXAS - JANUARY 04: Deshaun Watson #4 of the Houston Texans runs the ball against the Buffalo Bills during the fourth quarter of the AFC Wild Card Playoff game at NRG Stadium on January 04, 2020 in Houston, Texas. (Photo by Christian Peterse

HOUSTON -
Deshaun Watson threw a touchdown pass and ran for a score in regulation and then led the winning drive in overtime as the Texans added another comeback to Houston playoff history by rallying from a double-digit second-half deficit for a 22-19 victory over the Buffalo Bills in the first round of the playoffs Saturday.

Both teams had to punt on their first possessions of overtime. On Houston's next drive, Watson evaded a sack by wriggling away from one defender and bouncing off another before rolling out to find Taiwan Jones for a 34-yard reception to set up first-and-goal.

Ka'imi Fairbairn then kicked a 28-yard field goal to lift Houston to the victory.

The Texans advance to the divisional round of the playoffs next weekend where they'll face either the Chiefs or the Ravens depending on the outcome of Saturday night's Titans-Patriots wild-card game.

The Texans scored 19 straight points to take the lead before Steven Hauschka's 47-yard field goal tied it with 5 seconds left to force overtime.

The win gives the Texans their first playoff victory since the 2016 season and extends Buffalo's postseason losing streak to six games, with their most recent playoff win coming in 1995. It's the first wild-card overtime game since the Broncos beat the Steelers 29-23 in the 2011 season.

The game conjured memories of another huge comeback in a wild-card game. The last time teams from Houston and Buffalo met in the playoffs it was in a game that is known as "The Comeback." The Bills set an NFL record for the largest comeback in NFL history by rallying from a 32-point deficit for a 41-38 overtime win against the Houston Oilers in a wild-card game in 1993.

This time Josh Allen and the Bills used a dominant first half to build a 13-point lead and were up 16-0 in the third quarter.

Watson had 247 yards passing and ran for 55 yards and DeAndre Hopkins had 90 yards receiving.

Allen threw for 264 yards, ran for 92 and caught a touchdown pass on a trick play in the first quarter, but often looked rattled late in his playoff debut.

Three time NFL Defensive Player of the Year J.J. Watt had a sack and gave a boost to Houston's defense in his return after sitting out since October with a torn pectoral muscle.