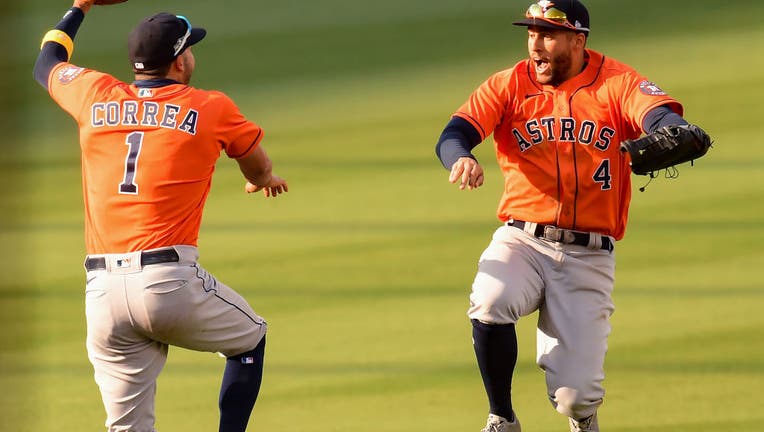 LOS ANGELES, CALIFORNIA - OCTOBER 05: Carlos Correa #1 and George Springer #4 of the Houston Astros celebrate the teams 10-5 win against the Oakland Athletics in Game One of the American League Division Series at Dodger Stadium on October 05, 2020 in

HOUSTON - Carlos Correa homered twice and drove in four, Jose Altuve hit a go-ahead, two-run single during Houston’s four-run sixth inning and the Astros rallied to beat the Oakland Athletics 10-5 in the opener of their AL Division Series on Monday at Dodger Stadium.

George Springer, MVP of the 2017 World Series, had four hits for Houston.

The Astros rallied with two outs in the sixth against Oakland’s vaunted bullpen to take control of Major League Baseball’s first neutral-site postseason game resulting from the coronavirus pandemic. Houston pounded out 16 hits in all as the A’s ran through eight pitchers.

The teams combined for six home runs in daytime conditions that were ripe for the ball to carry at the stadium where the Dodgers hit a major league-leading 118 homers. The temperature was 91 degrees at the game time under sunny skies and with a little breeze, although tricky shadows crept toward the mound during the final innings.

The entire best-of-five series will be played during the day. At night, the air is cooler and often thicker, an environment less favorable to hitters.

Houston’s hitters hadn’t looked quite the same this year, the first since their sign-stealing scheme was unveiled. Altuve, Correa and others slumped during the regular season, and the team hit a combined .194 during a two-game sweep of Minnesota in the wild-card round.

“You can’t judge this offense by 60 games,” Correa said.

The Astros’ swagger emerged at the same ballpark where they beat the Dodgers to win the 2017 World Series in seven games, helped by their sign-stealing scandal that rocked baseball and drew the ire of rival players and fans.

After two quick outs in the sixth, Houston’s Josh Reddick reached when shortstop Marcus Semien booted a grounder for a costly error that allowed the Astros to extend the inning.

Martin Maldonado followed with a single. Springer doubled to shallow left for his 25th career postseason extra-base hit in the leadoff spot, moving past Derek Jeter for most ever, according to Stats Perform. The ball zinged down the third-base line past a diving Chad Pinder, pulling Houston to 5-4.

Altuve’s line-drive single to left scored Maldonado and Springer to put the Astros back in front, 6-5. Altuve moved up on the throw home and scored on Michael Brantley’s single to right.

Correa’s second home run — a blast to center in the seventh — had Ramon Laureano climbing the wall in pursuit. His spikes dug a hole in the wall covering as the Astros led 8-5.

Blake Taylor got the victory with one inning of relief. J.B. Wendelken took the loss, allowing four runs and three hits in two-thirds of an inning.

Oakland led 5-3 in the fifth on Mark Canha’s sacrifice fly to right that scored Semien. He singled and took second when third baseman Alex Bregman barehanded the ball and threw it past first for an error.

Matt Olson homered leading off the fourth, putting Oakland back in front 4-3. His shot to center was his first-ever hit off Lance McCullers Jr.

Chris Bassitt put the potential tying and go-ahead runs on in the fifth with back-to-back singles by Springer and Altuve. But he gave way to Yusmeiro Petit, who retired the next three batters to escape the jam.

Bassitt was cruising along until the Astros jumped on him for three straight hits in the fourth. Bregman homered leading off, Kyle Tucker followed with a single and scored on Correa’s homer to center that tied the game, 3-3. Bassitt hadn’t given up three runs since August.

McCullers got out of any further damage by retiring the next three batters.

The A’s took a 3-0 lead with homers by designated hitter Khris Davis, who had a two-run blast in the second, and Sean Murphy’s solo shot in the third. Olson walked to set up Davis, who went opposite-field on the first pitch from McCullers.

Bregman has homered on Oct. 5 for four straight years.

Astros: LHP Framber Valdez got a victory in the AL wild-card series against Minnesota.

Athletics: LHP Sean Manaea makes his second career postseason start after losing the AL wild card game last year when chosen to start over 15-game winner Mike Fiers, who had pitched his second career no-hitter in 2019. Manaea returned later than he had hoped following surgery in September 2018 to go 4-0 with 1.21 ERA in five starts over September last season.