Here are the times in history when the Olympics have been canceled or postponed.

American sprinter Sha'Carri Richardson has accepted a 30-day suspension as a result of a failed drug test, the U.S. Anti-Doping Agency announced Friday.

Richardson, 21, tested positive for a chemical found in marijuana during last month’s Olympic trials. She qualified for the Tokyo Olympics when she won the 100-meter race with a time of 10.86 seconds, but her positive test has rendered a disqualification.

"The rules are clear, but this is heartbreaking on many levels; hopefully, her acceptance of responsibility and apology will be an important example to us all that we can successfully overcome our regrettable decisions, despite the costly consequences of this one to her," USADA CEO Travis T. Tygart said in a statement.

On Thursday, as reports swirled about her possible marijuana use, Richardson put out a tweet that said, simply: "I am human." On Friday, she went on TV and said she smoked marijuana as a way of coping with the loss of her mother, who died the week before the Olympic trials.

"I was definitely triggered and blinded by emotions, blinded by badness, and hurting, and hiding hurt," she said on "Today." "I know I can't hide myself, so in some type of way, I was trying to hide my pain." 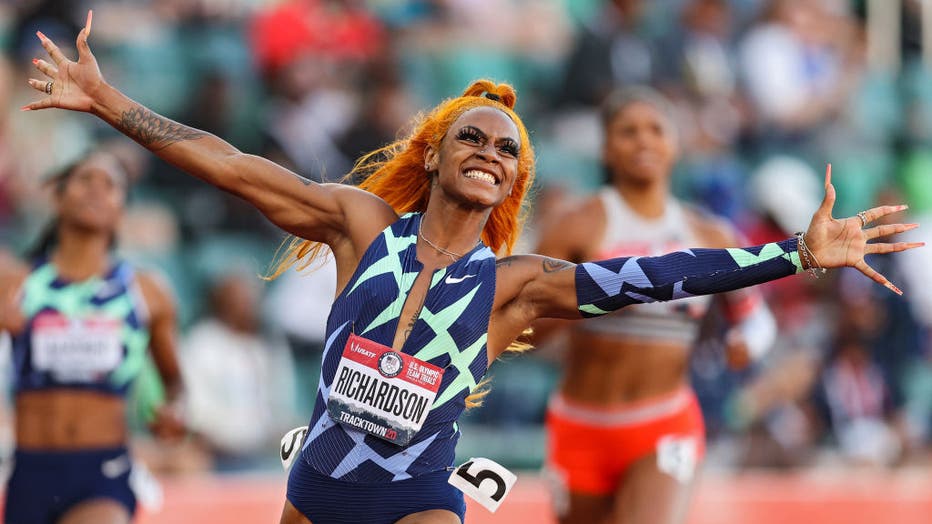 Richardson got an outpouring of support in the aftermath of the trials. Former first lady Michelle Obama tweeted that Richardson’s race was "something to behold."

"We are all so proud of you, Sha’Carri! Can't wait to see what you do in Tokyo," Mrs. Obama said.

Tokyo was set to be the stage of a highly anticipated matchup between Richardson and Jamaica’s Shelly-Ann Fraiser-Pryce — both known for their bright, colorful hair and leaving competitors behind. But the suspension has all but ended the chances of the two meeting outside of a relay setting.

Richardson’s suspension began on June 28 and will expire on July 27, making her eligible to run in the women’s relays in Tokyo. U.S. Track and Field hasn't commented on plans for the relay.

The organization issued the following statement on Richardson’s suspension:

"Sha’Carri Richardson’s situation is incredibly unfortunate and devastating for everyone involved. Athlete health and well-being continue to be one of USATF’s most critical priorities and we will work with Sha’Carri to ensure she has ample resources to overcome any mental health challenges now and in the future."

Richardson said if she's allowed to run in the relay "I'm grateful, but if not, I'm just going to focus on myself."

This story was reported from Atlanta. The Associated Press contributed to this report.