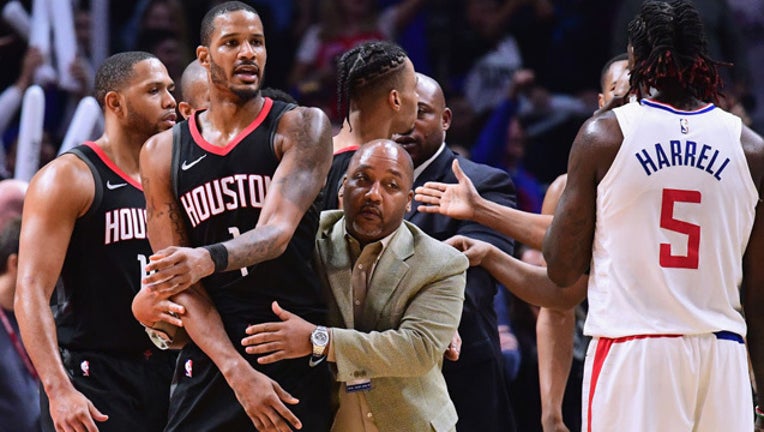 Trevor Ariza #1 of the Houston Rockets is restrained by an assistant coach before his ejection from the game during a 113-102 LA Clippers win at Staples Center on January 15, 2018 in Los Angeles, California. (Photo by Harry How/Getty Images)

The incident followed the Clippers winning over the Rockets 113-102 on Monday, Jan. 15 at Staples Center. During the league’s investigation, which included more than 20 interviews with executives, staff, coaches and players from both teams, as well as arena personnel, it was determined that Ariza and Green entered the Clippers’ locker room immediately after the game and engaged in a hostile, verbal altercation with several Clippers players.

The league’s investigation further concluded that Rockets players, James Harden and Chris Paul, followed Ariza and Green into the corridor outside the locker room in an effort to defuse the situation, and accordingly, discipline is not warranted.

Ariza and Green will serve their suspensions during the Rockets next two games on Thursday, Jan. 18 against the Minnesota Timberwolves and Saturday, Jan. 20 against the Golden State Warriors.