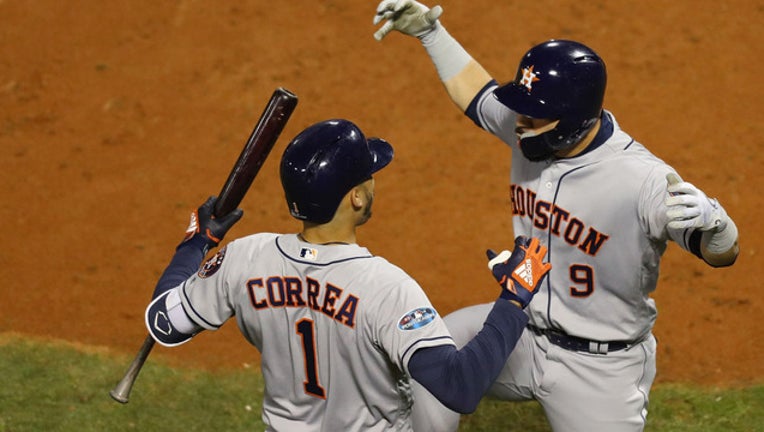 Marwin Gonzalez of the Houston Astros celebrates with Carlos Correa after hitting a two-run home run in the third inning against the Boston Red Sox during Game 2 of the ALCS at Fenway Park on October 14, 2018. (Photo by Omar Rawlings/Getty Images)

BOSTON (AP) - David Price was good enough, the Red Sox bullpen was even better, and Jackie Bradley Jr. delivered a go-ahead, three-run double off the Green Monster on Sunday night to lead Boston to a 7-5 victory over the Houston Astros and tie the AL Championship Series at one game apiece.

Price fell one out short of his first career postseason win as a starter but still went back to the winning clubhouse for the first time in 11 playoff starts.

Red Sox closer Craig Kimbrel gave up an RBI single to Jose Altuve with two outs in the ninth before Alex Bregman hit a flyball that was caught on the warning track in left field to end it, handing Houston its first loss in five playoff games this year.

Game 3 is Tuesday in Houston, followed by two more at Minute Maid Park and a chance for the defending World Series champion Astros to clinch a second straight AL pennant at home.

Price was spotted a two-run lead in the first inning and then fell behind 4-2 before Bradley clanged one off the Monster that Astros left fielder Marwin Gonzalez helplessly chased as it bounced back toward the infield.

Price left with a 5-4 lead after walking Tyler White on four pitches with two out in the fifth, his second walk of the inning; in all, the Red Sox left-hander was charged with four runs on five hits and four walks, striking out four.

Matt Barnes struck out Gonzalez to end the inning and then pitched a perfect sixth to earn the victory. Ryan Brasier pitched a scoreless inning and erstwhile starter Rick Porcello set the Astros down 1-2-3 in the eighth.

Kimbrel retired the first two batters in the ninth, then George Springer hit his second double of the game. Altuve followed with a drive off the left-field wall, stopping at first when he slipped rounding the bag.

Bregman launched a high fly to left that Andrew Benintendi caught a step in front of the Monster.

Gerrit Cole, who was so dominant in his Division Series start against Cleveland, gave up a double to Mookie Betts - the first batter of the game - as Boston sent eight batters to the plate in the first. Benintendi singled to score Betts and scored himself on a single by Rafael Devers, who was making his first appearance of the series.

The AL Central champs tied it in the second on Springer's two-run double down the right-field line. And when Gonzalez cleared the Monster - and the seats above them - with a two-run homer in the third, it looked like Price was headed for his 10th straight loss as a playoff starter (he has won two postseason games in relief.)

But Boston, which won the AL East and a franchise-record 108 games, came back in the bottom half, starting with Xander Bogaerts' one-out single and then a double that sent Gonzalez crashing back-first into the metal scoreboard on the left-field wall. He fell to the warning track, but after the training staff and manger AJ Hinch went out to check on him he stayed in the game.

Cole walked Devers on four pitches to load the bases and struck out Ian Kinsler on three pitches before Bradley lofted one down the left-field line and off the Monster. As the ball bounced back toward the infield, it hopped on the padding along the side wall, just out of Gonzalez's reach.

Betts scored an insurance run in the seventh, walking to lead off the inning and coming around to make it 6-4 on a wild pitch and a pair of passed balls. He gave Boston a 7-4 lead with an RBI double in the eighth.

Cole was 15-5 in the regular season and shut down the Cleveland in Game 2 of the ALDS, when he struck out 12 and walked none to join Hall of Famer Tom Seaver as the only pitchers in postseason history to strike out a dozen or more without walking anyone.

It was the first-ever postseason matchup of No. 1 overall draft picks, with Price going first to Tampa Bay in the 2007 draft and Cole the top pick by Pittsburgh in 2011.

Price had been 0-9 in his first 10 career postseason starts, and his teams had lost all 10 - the longest such losing streak in baseball history. He allowed three runs and got just five outs in Game 2 against the Yankees, the only Red Sox loss in the series.

He seemed to be headed in the same direction falling behind 4-2 after three innings, but retired the Astros in order in the fourth on 10 pitches. In the fifth, he walked Bregman with one out and then, with two outs, he walked White.

As manager Alex Cora came out to get him, Price had an animated talk with his infield on the mound - a pep talk? Just venting? Who knows? As Price left the field, the crowd rose to applaud the pitcher they booed off the mound in Game 2 of the Division Series, and he tapped the brim of his cap.

It was Houston's 14th straight postseason game with a homer, breaking the major league record that had been held by the Astros from 2001-04.

The game skidded to a halt in the sixth inning after Jackie Bradley Jr. was tagged out by catcher Martin Maldonado on a nubber in front of the plate. Bradley never left the box, and claimed that the ball hit him, which would make it a foul ball. After a lengthy review for a rules check, Bradley resumed his at-bat. He flied out to right field on the next pitch.

Dallas Keuchel, who was 12-11 with a 3.74 ERA in the regular season, will start Game 3 for Houston. He allowed two runs in five innings in the Game 3 clincher against Cleveland.

With Porcello pitching in relief on Sunday, the Red Sox are expected to start Nathan Eovaldi on Tuesday. He was 6-7 with a 3.81 ERA in the regular season and allowed one run in five innings for the win against the Yankees in Game 3 of the ALDS - his first career postseason appearance.