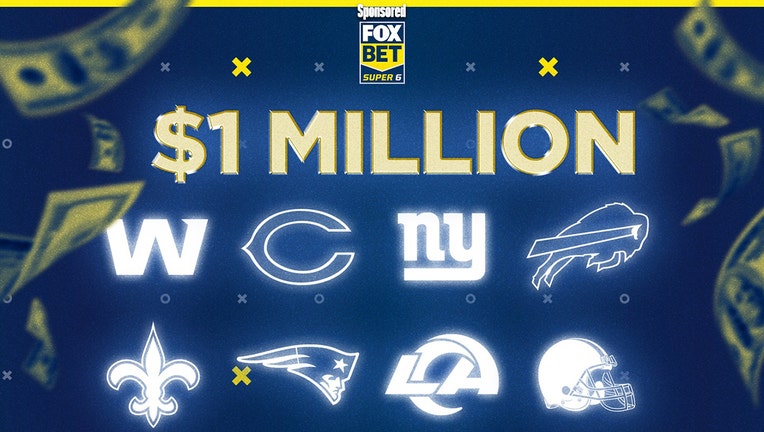 Week 3 in the NFL presents a little bit of a good news, bad news situation.

The good news: FOX Bet Super 6 is once again giving you a chance to win $1 million of Terry Bradshaw's money absolutely for free.

All you have to do is download the app, make your picks and tune in on Sunday to see whether you were able to correctly predict the outcomes of six Week 3 NFL games.

The bad news? This is your last chance to win $1 million this regular season!

Next week, the Super 6 grand prize will be reduced to a still incredible $100,000. So if you want to cash in on that cool $1 million, now is the time to make your picks. Here are my thoughts on each of the Super 6 games (with all odds via FOX Bet).

In a matchup of two coaches who know each other extremely well, dating to their time in Carolina, expect a low-scoring game, with the total already down over a point. In 2017, when Ron Rivera was still in Carolina and faced Sean McDermott’s Bills, the game ended 9-3.

Washington has extra time to prepare coming off the TNF win over the Giants. Their defensive formula should be similar to what Pittsburgh's was: only rush four, don’t blitz, and confuse Josh Allen with exotic looks. Allen was an MVP candidate last year. Through two games in 2021, he has struggled from a clean pocket and even against the blitz, grading out as the 28th-best QB in the NFL, per Pro Football Focus.

The Bills' defense isn’t nearly as good as the six-sack, nine-tackle-for-loss clinic it put on last week in a shutout of the Dolphins and their backup QB, but it will make life difficult for Taylor Heinicke in his first road start. Buffalo wins; Washington covers.

The Browns choked away a big lead in Kansas City and lost the opener, then didn’t cover against the lowly Texans. Baker Mayfield has been solid yet unspectacular and might have to win this one for Cleveland if the Bears can bottle up Nick Chubb and the run game.

The Bears are allowing just 3.3 yards per carry through two games, fifth in the NFL. Chubb is averaging 6.8 yards per carry, most of any starting RB in the NFL. Mayfield will be down his possession receiver (Jarvis Landry), and it is unclear if his highest-paid receiver (Odell Beckham) will make his debut.

But the Browns have a significant edge in coaching, and I’m not sure the Bears' offense can do enough to keep up with Cleveland’s offense. Chicago, with Andy Dalton and rookie Justin Fields, mustered just 206 yards (3.4 yards per play) in a defensive-led home triumph over the Bengals' average defense. It’s unclear if Fields will get his first start, but the Ohio State QB should feel right at home in Cleveland. PICK: Browns to win by 3-4 points

How can anyone back Atlanta after two straight 20-plus-point losses to open the season? The Falcons could be the worst team in the NFC. They’ve lost seven straight games bridging this season and last.

It’s difficult, but there is a path to victory in a shootout. Atlanta’s offense climbed within 28-25 of the Bucs in the fourth quarter before two pick-sixes did them in. Arthur Smith’s offense should have success through the air against a Giants defense that has been shredded by Teddy Bridgewater and Taylor Heinicke.

Daniel Jones has more rushing yards (122) than Austin Ekeler, Ezekiel Elliott, Saquon Barkley and Jonathan Taylor. He’s got a higher YPC, too. That's not a winning long-term strategy. Plus, the only team he doesn’t turn the ball over against is Washington, so if you ride with the Giants, brace for bad decisions.

It’s tough to trust the Giants as favorites, especially at home, where they’re just 4-10 with Jones starting under center.

PICK: Falcons to win by 1-2 points

This is a fishy line for a team going on the road for the third straight time to open the season. Displaced by Hurricane Ida, the Saints were in Jacksonville (as the "home" team), then Carolina and now travel north to play the new-look Patriots.

Or perhaps you prefer "Throwback Patriots," as Bill Belichick is going to win with defense and a formidable ground game led by Damien Harris. After all, that was Tom Brady’s path to success early in his career. The Saints' run defense is banged up in the front seven and could be in real trouble here.

Yet the Jameis Winston-led offense is the real concern. Alvin Kamara has 111 yards of total offense in two games and just one TD. He topped that yardage output in seven games in 2020. This feels like a boring, low-scoring snoozer that the Patriots win handily — unless Mac Jones tries to do too much.

PICK: Patriots to win by 7-9 points

We established in Week 1 that West Coast teams traveling east in September and struggling isn’t a thing. What do you know? Arizona opened the season with a 38-13 rout of Tennessee in Nashville.

It’ll be a mild surprise if the score isn’t similar here against a Jaguars team that can do nothing right through two games. It’s early, but I might have been wrong about Jacksonville’s offense. Trevor Lawrence doesn’t looked poised or confident, and the supporting cast — solid on paper! — has been woeful. Jacksonville didn’t reach the red zone once against Denver.

Arizona’s defense isn’t great, but Vance Joseph will give Lawrence problems the same way he did young QBs Sam Darnold and Daniel Jones last season. If Jacksonville’s top CB, CJ Henderson, is out, look for DeAndre Hopkins to have a monster game. Denver WR Courtland Sutton went for nine catches and 159 yards receiving last week, much after Henderson left the game.

The large total makes some sense, but there is a world in which the Bucs' defense totally shuts down Sean McVay's squad and wins handily. It feels that Tampa is undervalued here, and it is the only game this season in which they’ve been underdogs (though the spread has moved two points since it opened, from Rams -1.5 to Bucs -.5).

As good as the Rams' defense was last season, the losses — including DC Brandon Staley — have been glaring to start the season. The Bears and Colts had three empty trips inside the 10 yard-line this season against the Rams. Those miscues won’t continue.

It’s OK to really like the Rams this year but think that Matt Stafford’s first huge game with a national TV audience, given his inability to "win the big game" in Detroit, might be too much this early in the year.

Play FOX Super 6 every week for your chance to win thousands of dollars, including a $10,000 on the Big Noon Kickoff game of the week, a weekly $25,000 contest across college football and, of course, the $1,000,000 NFL Challenge. Just download the Super 6 app and make your picks today!

No purchase necessary. Open to legal residents of the US, excluding WA. 18 and older. See terms and conditions at foxsuper6.com. Sweepstakes and Prize Sponsored by TSG Interactive US Services Limited.