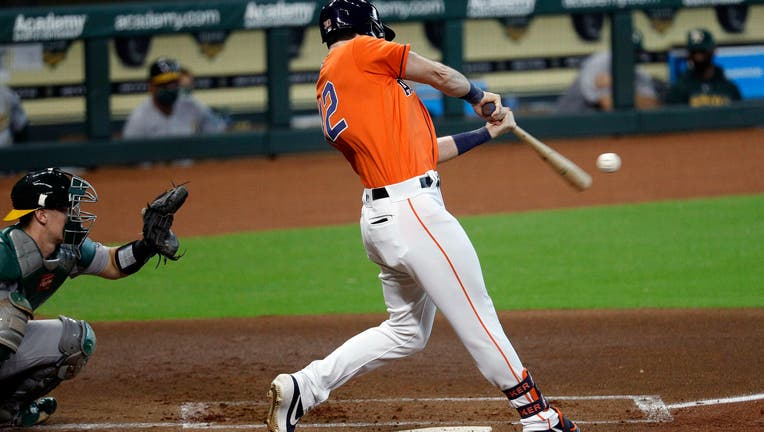 HOUSTON, TEXAS - AUGUST 29: Kyle Tucker #42 of the Houston Astros hits a three run home run in the first inning against the Oakland Athletics during game one of a doubleheader at Minute Maid Park on August 29, 2020 in Houston, Texas. All players are

Josh Reddick also connected for the Astros, who won for the third time in four games. Tucker and Jack Mayfield each had two hits.

The doubleheader was scheduled after the Athletics and Astros decided not to play Friday night in order to raise awareness of racial inequality in the wake of the police shooting of 29-year-old Jacob Blake, a Black man, in Wisconsin.

Tucker put Houston ahead to stay with his sixth homer in the first inning, a drive off Chris Bassitt (2-2) that went just inside the right-field foul pole. Reddick led off the fourth with his second homer.

McCullers (3-2) allowed two runs -- one earned -- and six hits with seven strikeouts and one walk. McCullers has allowed two or fewer runs in three of his last four starts.

Ryan Pressly pitched the seventh for his fifth save.

McCullers got some help from his defense in the second. Shortstop Carlos Correa cut down Mark Canha at the plate when he tried to score from first on a double by Ramon Laureano.

The teams were originally scheduled to celebrate Jackie Robinson Day on Friday, but celebrated it during the first game of the doubleheader instead, with every player and coach wearing No. 42.

TRAINER'S ROOM
Astros: OF George Springer returned to the lineup after missing Tuesday's doubleheader with a bruised left elbow. ... INF Aledmys Diaz was reinstated from the 10-day injured list.

DOUBLEHEADERS IN HOUSTON
Saturday's doubleheader was the second for the Astros this week and third in Minute Maid Park history, with the other one on Sept. 2, 2017, against the Mets following Hurricane Harvey. The Astros and Angels moved up Thursday's game to Tuesday ahead of Hurricane Laura, which made landfall in Louisiana on Thursday morning. Houston's game on Wednesday against the Angels was postponed.

Astros: RHP Zack Greinke (1-0, 2.20 ERA) will start the second game of the doubleheader. Greinke has gotten no-decisions in five of his six starts this season.