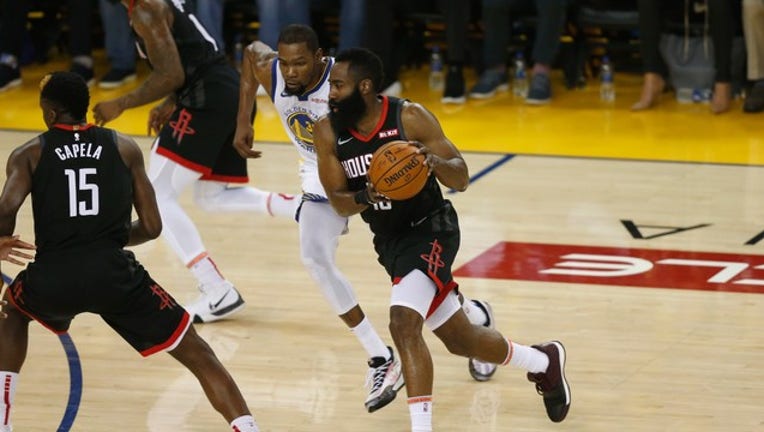 OAKLAND: James Harden #13 of the Rockets dribbles the ball up court against the Warriors during Game 5 of the Western Conference Semifinals of the 2019 NBA Playoffs at ORACLE Arena on May 8, 2019. (Photo by Lachlan Cunningham/Getty Images)

An official announcement that Harden is the newest member of the group is expected soon.

The 2018 NBA MVP joins the ownership group headed by Gabriel Brener, the majority owner of the MLS and the NWSL teams.

In 2015 Brener’s group acquired AEG’s interest in the Dynamo, the Dash and BBVA Stadium, home to both teams.

Brener’s ownership group has to be considered one of the most unique in sports.

De La Hoya also established Golden Boy Promotions in 2002, and according to the company’s website he is the first Hispanic to own a national boxing promotional company.

Brener’s ownership group according to the Dynamo’s website also includes Ben Guill, managing partner of White Deer Energy, which has offices in Houston and New York, and Jake Silverstein, a private investor based in Portland, Oregon.

It is not known what percentage Harden owns, but according to sources he has been added to the ownership group and is not replacing any of its members.

Dynamo and Dash officials have not been available for comment.

An official announcement is expected soon.