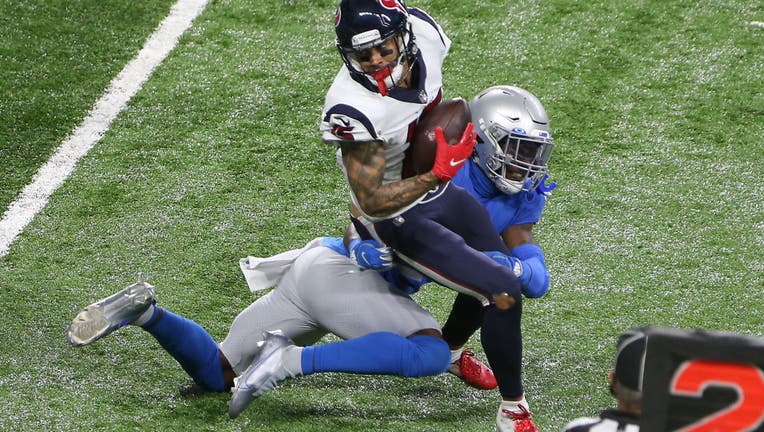 Houston Texans wide receiver Will Fuller (15) is pulled down by Detroit Lions cornerback Amani Oruwariye (24) during the first half of an NFL football game between the Detroit Lions and the Houston Texans in Detroit, Michigan USA, on Thursday, Novemb

HOUSTON - The Houston Texans will lose two key starters – wide receiver Will Fuller V and cornerback Bradley Roby – for the remainder of the 2020 season due to league suspensions for use of banned substances.

Fuller announced on Instagram he has been suspended six games for violating the NFL policy on performance-enhancing drugs.

“As a result of this mistake, I have been suspended for six games for taking this prohibited medication,” the former first-round draft pick wrote on Instagram.

“I want to sincerely apologize to the Texans organization and all of my fans for this mistake. I am looking forward to putting this all behind me and returning better than ever in 2021.”

Roby released a statement saying he has also been suspended six games by the league.

“A few months ago I unknowingly used a product that was contaminated with a banned substance by the NFL,” said Roby. “I recognize that is my job to know, and be responsible for, everything I put in my body.

“I apologize to my family, my teammates, the Houston Texans organization and the fans.”

Fuller, who caught six passes for 171 yards and two touchdowns in the Texans’ Thanksgiving win over Detroit, was in the midst of the best season of his career.

As the Texans’ top option at receiver following the offseason trade of DeAndre Hopkins, Fuller has excelled – with career-highs in catches (53), yards (879), and touchdowns (eight).

Fuller, who has battled injury issues throughout his career, says he “sought treatment from a medical professional who prescribed medication that he believed to be permitted under the NFL’s drug policy.

“As it turns out, my trust in this professional was misplaced because this medication was NOT a permitted substance under the NFL Policy on Performance Enhancing Substances.”

Roby, considered the Texans’ top cover corner, has appeared in ten games this season, with 7 passes defended, an interception, and a fumble recovery.

The 4-7 Texans host the division rival Indianapolis Colts on Sunday at NRG Stadium.