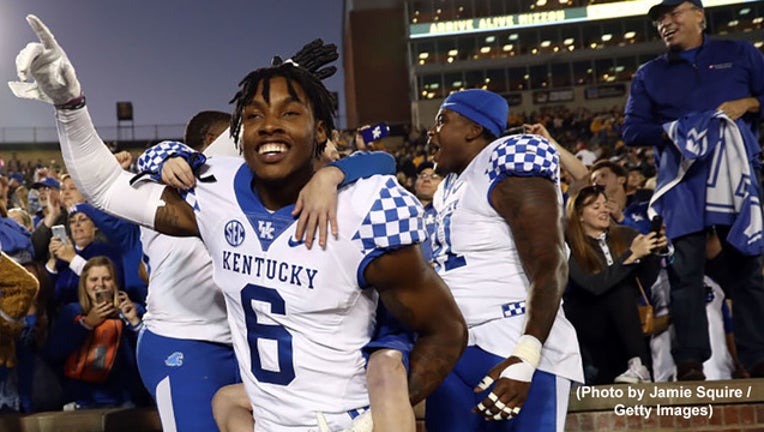 Cornerback Lonnie Johnson Jr. celebrates with teammates and fans after the Kentucky Wildcats defeated the Missouri Tigers 15-14 to win the game at Faurot Field/Memorial Stadium on Oct. 27, 2018 in Columbia, Mo. (Photo by Jamie Squire/Getty Images)

The Houston Texans selected two back-to-back second round picks during the NFL Draft on Friday.

The team drafted cornerback Lonnie Johnson from the University of Kentucky with the 54th pick immediately followed by the selection of offensive tackle Max Scharping from Northern Illinois University, the 55th pick.

"Basically because I'm lucky," said Johnson in a conference call with the media, referring to why his nickname is 'Lotto.' "Hey, I'm lucky to make it out of Gary (Indiana). I'm lucky to be in this position. I'm lucky to get drafted. I'm lucky."

"It's hard coming out of Gary (Indiana)," added Johnson. "I broke down because I know how hard it is. I know that I'm not done yet. I'm at a loss for words. I almost gave it up at one point in junior college because I kept getting knocked down."

"I'll do whatever they need me to do," explained Johnson. "I know my size (6-2/213) is a big thing. That's probably the reason why they drafted me. I'm just ready." (Favorite coverage?) "Press man. I like to get down there and get greedy."

"I grew up watching him at Wisconsin, so it's going to be amazing to be on the same team," described Scharping about being a teammate to Texans defensive end JJ Watt. "You're going against the best defensive line in the country. You got him. You got Clowney. Games should be a lot easier."