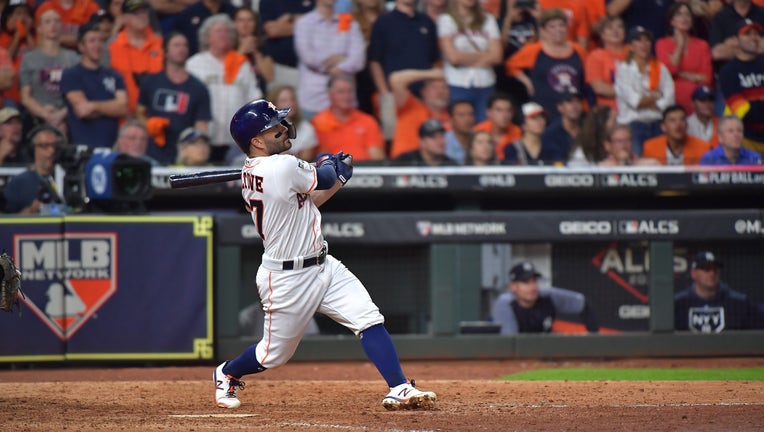 Houston, TX: Houston Astros' second baseman Jose Altuve hits a 2-run home run to win the game in the ninth inning in Game 6 of the ALCS against the New York Yankees on Saturday, Oct. 19, 2019 at Minute Maid Park in Houston, Texas. (Photo by J. Conrad Williams, Jr./Newsday via Getty Images)

HOUSTON - Houston Astros second baseman Jose Altuve is denying he ever wore an electronic device under his uniform to steal signs.

On Thursday, his agent Scott Boras called the allegations “false.”

“Certainly there have been false allegations made, and Jose contacted me immediately to correct the record that he has never used any form of electronic device in any of his Major League games and/or performances,” Boras said. “So many people are caught in the spider web, but they are not the black widow. I think that exemplifies Jose’s position about allegations like this."

According to Fox News, the controversy stirred up when someone claiming to be Beltran’s niece wrote in a now-deleted tweet that Altuve and Alex Bregman “wore devices that buzzed on inside right shoulder from hallway video guy.” The person also tweeted, "I have pictures from locker I will keep for rainy day. Altuve didn't want shirt torn off if I remember maybe I misspoke but Chapman gave up HR in game."

In response to the allegations, the MLB issued a statement on Thursday saying "MLB explored wearable devices during the investigation but found no evidence to substantiate it."

Houston Astros General Manager Jeff Luhnow and manager A.J. Hinch were fired by the team on Monday following Major League Baseball’s investigation into the camp's cheating during the 2017 championship season. Luhnow and Hinch were suspended for a year by the MLB.

A day after, the Boston Red Sox announced they "mutually agreed to part ways" with manager Alex Cora. Cora was Houston’s bench coach in 2017.

On Thursday, the New York Mets announced Carlos Beltran was out as manager. Beltran played for the Astros in 2017.

The MLB named both Cora and Beltran in the report as having a role in the team's sign stealing.