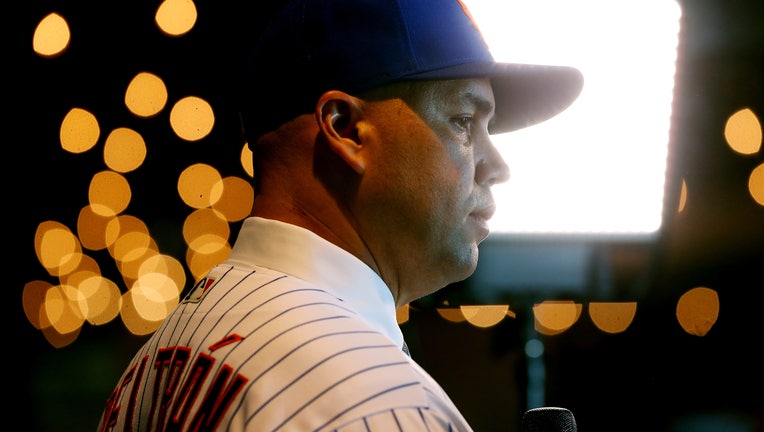 NEW YORK, NY - NOVEMBER 04: Carlos Beltran talks to the media after being introduced the manager of the New York Mets during a press conference at Citi Field on November 4, 2019 in New York City. (Photo by Rich Schultz/Getty Images)

Carlos Beltran is out as New York Mets manager amid fallout from the Houston Astros' sign-stealing scandal.

Beltran said in a statement that he didn't want to be a "distraction from the team".

“At a meeting this morning with Jeff and Brodie we mutually agreed to part ways. I’m grateful to them for giving me the opportunity, but we agreed this decision is in the best interest of the team. I couldn’t let myself be a distraction for the team. I wish the entire organization success in the future," the statement read.

In a statement, Wilpon and Van Wagenen said, “We met with Carlos last night and again this morning and we agreed to mutually part ways. This was not an easy decision. Considering the circumstances, it became clear to all parties that it was not in anyone’s best interest for Carlos to move forward as manager of the New York Mets. We believe that Carlos was honest and forthcoming with us. We are confident that this will not be the final chapter in his baseball career. We remain excited about the talent on this team and are committed to reaching our goals of winning now and in the future.”

The move came two days after Boston cut ties with manager Alex Cora, who was Houston’s bench coach in 2017 when Beltrán played for the Astros.

A day before that, manager AJ Hinch and general manager Jeff Luhnow were fired by Houston soon after they were suspended for the 2020 season by Commissioner Rob Manfred for their roles in the cheating scheme.