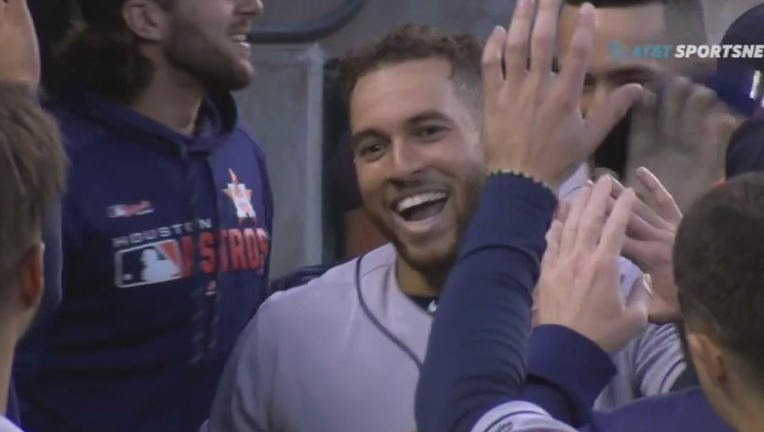 HOUSTON - Former Astros star George Springer, who officially joined the Toronto Blue Jays this week, leaves Houston with special feelings and emotions that will be important to him for the rest of his baseball career and beyond.

"First and foremost, I want to say thank you to the city, to the fans, to all my teammates, to everybody who I’ve known along the way who’s had a special impact on my life," Springer said during an interview Friday on Zoom with FOX 26 Sports.

"I used to have a kind of cool thing. I’d get to the stadium every day and just like to say hi to people and everybody always said hi back and would ask how you were. That means the world to me."

"I thank you all for everything. This is a place where I got an opportunity to play, to grow as a person, to grow as a player. I will always consider Houston my home away from home."

Springer says his fondest memory in an Astros uniform stems from the franchise’s monumental win in the 2015 postseason at Yankee Stadium.

"I have a ton (of memories)," Springer said. "I think one that I’m most proud of was in 2015 when we won the Wild Card Game. For some reason, it just really stands out with me. I don’t know why. I think that’s when us as players, us as an organization, us as a city, we really took the next step.

"I’ve had so many good memories in that jersey."

And one memory that is rather difficult which occurred after the 2020 American League Championship Series.

"The hardest one, just walking away and kind of understanding I took the jersey off for the last time," Springer said. "It hit me the other day. Don’t tell (Astros clubhouse manager) Carl (Schneider), but I still have it. It means a lot to me."

Springer will return to Minute Maid Park for the first time as a member of the Toronto Blue Jays May 7-9.

"I haven’t put much stock into that yet," Springer said. "I’m sure as the day gets closer I will. I know it’s gonna be emotional for me.  I’m gonna get a chance to see the guys that I grew up with, I played with basically my whole career.

George Springer, the Most Valuable Player of the 2017 World Series, will always have a special place in Houston sports history.

"It’s an honor," Springer said. "I think the community gave to me way more than I ever gave to them and it means a lot. It’s my home away from home. It’s where I lived. It’s where I grew up as a player, as a person. It’s unbelievable. I’ll never forget it.

"It’s something that I’ll always hold very, very close to my heart."