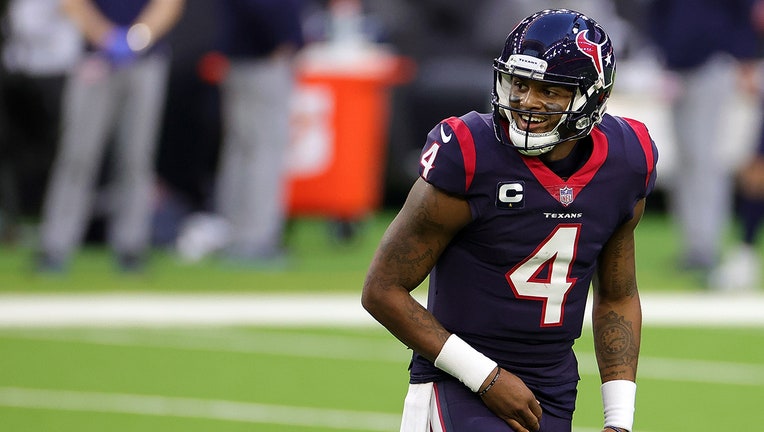 Deshaun Watson of the Houston Texans reacts to a touchdown during a game against the Tennessee Titans at NRG Stadium on January 03, 2021 in Houston, Texas. (Photo by Carmen Mandato/Getty Images)

Deshaun Watson changed his mind. The Browns have their franchise quarterback, one with some extra heavy baggage.

Watson decided to waive his no-trade clause and the controversial QB accepted a trade to Cleveland after previously rejecting the team, a person familiar with the decision told The Associated Press on Friday.

Watson, who didn't play last season for Houston, had informed the Browns on Thursday that he wasn't coming. However, he had a change of heart and called the team Friday, said the person who spoke on condition of anonymity because the team has not announced the imminent trade.

The Browns are paying a hefty price for Watson, sending the Texans three first-round draft picks, a third-rounder and one in the fifth for the 26-year-old.

Watson posted a photo on Instagram of him wearing a No. 4 Browns jersey and wrote: "Cleveland, LETSSSS GOOOO!!

Watson will be joining a Cleveland team with plenty of talent, but one that underachieved last season and has been in search of a franchise quarterback for years. The three-time Pro Bowler became a target of the Browns after a grand jury declined to indict him on sexual misconduct claims made by 22 women.

Watson is still dealing with civil lawsuits from the women, massage therapists who accused him of assault and harassment. He's also facing a likely suspension by the NFL for violating the league's personal conduct policy.

His arrival in Cleveland will likely be met with a backlash by some fans, but the Browns are comfortable with his character after doing their own investigation.

Watson will receive a five-year, $230 million guaranteed contract, according to NFL Network. ESPN's Adam Schefter reports the deal is a league record for the amount of guaranteed cash.

The Browns' public pursuit of Watson angered incumbent starter Baker Mayfield, who requested a trade. Cleveland turned down Mayfield's demand before learning Watson had agreed to waive his no-trade clause and jump to the AFC North.

Watson had also been courted by Atlanta, Carolina and New Orleans. Cleveland seemed to have the longest odds to get him, but he was intrigued by their talented roster, which includes star defensive end Myles Garrett and running back Nick Chubb.

Cleveland's pursuit of Watson must have been helped by the team signing free agent wide receiver Amari Cooper last week as well.

Browns owners Dee and Jimmy Haslam have spent the entirety of their tenure trying to find the right quarterback. The team had tried almost every possible avenue, signing veteran free agents and drafting college stars like Johnny Manziel and Mayfield, who was selected first overall in 2017.

The Watson trade smacks of some desperation, considering his legal woes but it does give them an elite player capable of matching up with Patrick Mahomes, Josh Allen, Justin Herbert and any of the other top QBs in the AFC.

The Browns will also have to deal with tough questions about why they're bringing on Watson despite his off-field issues. As part of their presentation to him in Houston this week, the team reportedly outlined a plan to help his image.

Watson had originally demanded the Texans trade him after the 2020 season, before the sexual misconduct accusations .

Cleveland had a chance to draft the former Clemson star in 2017, but twice passed on him. They didn't overlook him this time and may have finally solved a position that confounded the team since its expansion rebirth in 1999.

Watson had his best season in 2020, leading the league with 4,823 yards passing along with 33 touchdowns.