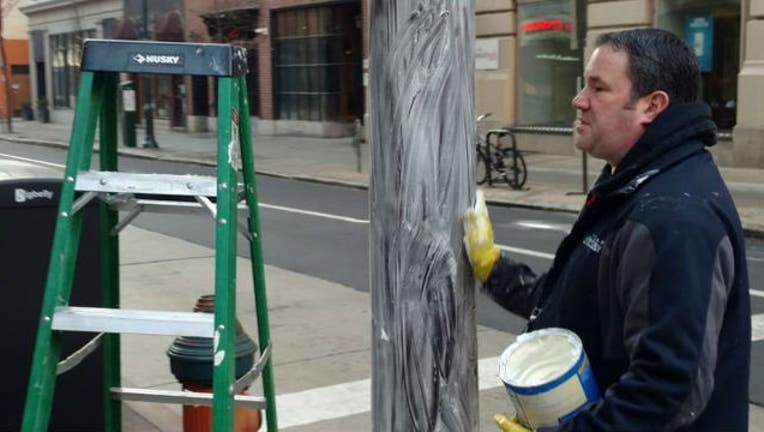 Good morning from Philadelphia where crews from the city are greasing the light poles with Crisco to prevent Eagles fans from climbing after the NFC Championship Game. Photo: Fox 9 Sports.

PHILADELPHIA (KMSP) - City crews dubbing themselves the Crisco Cops were greasing light poles around Philadelphia Sunday to prevent Eagles fans from climbing after the NFC Championship game. The Philadelphia Eagles and Minnesota Vikings kickoff at 5:40 p.m. CT on FOX.

A trip to the Super Bowl is at stake, meaning one city (or two cities in Minnesota’s case) will erupt in excitement Sunday night. For the Vikings, an NFC Championship would be an historic feat – Minnesota is hosting Super Bowl LII and no NFL team has ever played a Super Bowl in its home stadium. The Vikings have never won a Super Bowl, but played in four of them (IV, VIII, IX, and XI).

The Eagles have appeared in the Super Bowl twice (XV and XXXIX),  but have never won the Lombardi Trophy. Philadelphia’s last super Bowl trip was in 2004 against the New England Patriots. But prior to that game, the Eagles appeared in (and lost) three consecutive NFC championship games.

The Vikings arrived in Philadelphia on Saturday and were greeted by fans with a Skol Chant outside their hotel. One fan who didn't make the trip is 99-year-old Mille Wall - a special guest a good luck charm for the Vikings last-second win over the New Orleans Saints in the Divisional round. But Millie will be watching from home, with her screwdriver and foam brick in hand.