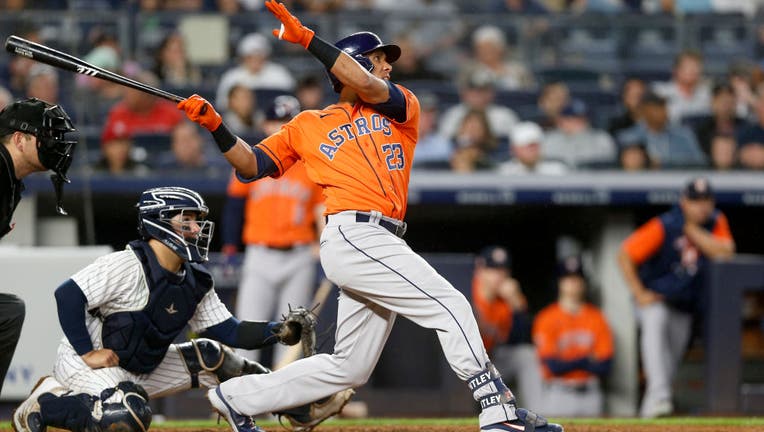 HOUSTON - Houston Astros outfielder Michael Brantley will miss the rest of the season after having surgery on his right shoulder this week.

"There were a lot of different avenues that were taken to try to get Michael back on the field in time for the end of the season," general manager James Click said Friday, "and ultimately, after consultation with our trainers and doctors, we ultimately came to the conclusion that this was the right path for him long-term for his health."

Brantley had surgery on Wednesday.

The loss of the sweet-swinging Brantley is a big blow for AL West-leading Houston. The five-time All-Star is a .298 hitter with 127 homers and 713 RBIs in 1,430 regular-season games.

Brantley also has enjoyed postseason success, batting .319 with nine RBIs during the Astros' run to the World Series last year.

"He tried hard to get back," Astros manager Dusty Baker said. "He got a number of opinions, he got a couple of procedural things -- it just didn't work. Michael's a big part of this club, not only on the field, but in the clubhouse and dugout and on the planes. He's not called `Uncle Mike' for nothing."

"He wants to come around and be a part of this club as much as he can because a lot of guys depend on him. A lot of guys go to him for advice, and I feel very confident in whatever Michael gives them. So, we'll miss him, big time," he said.

Aledmys Diaz was in left field for Friday night's series opener against last-place Oakland. Chas McCormick and Yordan Alvarez also have started in left for the Astros this year.

Trey Mancini, who was acquired from Baltimore as part of a three-team trade on Aug. 1, also could be an option. Click said Astros third base coach Gary Pettis has been working with Mancini to prepare him to more regularly play in the outfield.

"Trey will be out there working on the nuances of playing left field here in Minute Maid Park, and that's part of the reason that we acquired Trey was that we felt like he could go out there in the corner outfield and help us out," Click said. "So I'm optimistic that that's something that we will be able to see over the next couple of months."