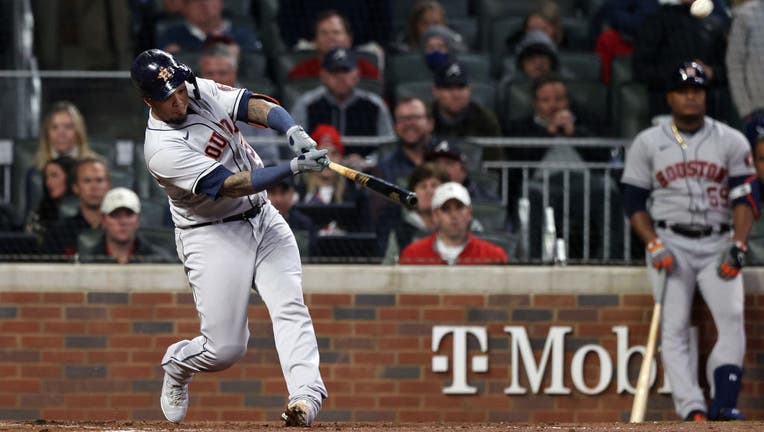 ATLANTA, GEORGIA - OCTOBER 31: Martin Maldonado #15 of the Houston Astros hits an RBI sacrifice fly ball against the Atlanta Braves during the second inning in Game Five of the World Series at Truist Park on October 31, 2021 in Atlanta, Georgia. (Pho

HOUSTON - The Houston Astros will be looking to keep their offense going heading into a must-win game 6 and force a deciding Game 7 of the World Series.

Astros manager Dusty Baker dropped Bregman down from third and moved Correa up from fifth for Game 5. Bregman hit an RBI double that started Houston’s comeback from a four-run deficit and Correa had three hits and two RBIs.

Right-hander Luis Garcia was on the mound with three days’ rest after lasting 3 2/3 innings and taking the loss in Game 3.

The Houston Astros also announced on Tuesday that the retractable roof at Minute Maid Park will be left open for Game 6.

The roof was closed for Atlanta’s opening win last week and remained closed for batting practice the next day, then was open for Houston’s Game 2 win.

Atlanta Braves lead-off hitter Eddie Rosario hits a fly ball to right field and a diving catch was made by Kyle Tucker. Jorge Soler steps into the batters' box and strikes out swinging. Freddie Freeman strikes out as well.

Houston Astros lead-off hitter Jose Altuve singled to shortstop and the throw was late by the Braves player to the bag. Michael Brantley stands in and reaches first base on an error by the Braves pitcher, Altuve advances to second base. Carlos Correa steps into the batters' box and strikes out swinging. Yordan Alvarez hits to the second baseman and is thrown out at first base, Altuve advances to third base and Brantley advances to second base. Yuli Gurriel was struck out looking.

Atlanta Braves' third baseman Austin Riley leads off the second inning and strikes out swinging. Adam Duvall steps in and hits a line drive down the left field line, Bregman makes the play throws out Duvall at first base. Joc Pederson pops out into shallow left field.

Kyle Tucker leads off for the Astros in the bottom of the second inning. Contacts the ball into the infield, however, the Braves were able to make the play at first base. Alex Bregman steps in and hits a ball right down the right field line, but the out was made in foul territory. Jose Siri flies out to left field. 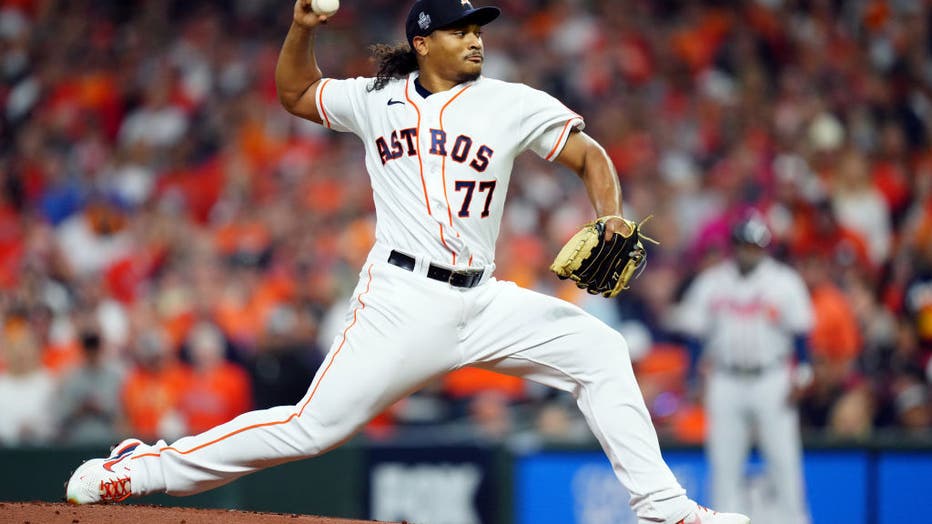 HOUSTON, TX - NOVEMBER 02: Luis Garcia #77 of the Houston Astros pitches in the first inning during Game 6 of the 2021 World Series between the Atlanta Braves and the Houston Astros at Minute Maid Park on Tuesday, November 2, 2021 in Houston, Texas.

Braves' second baseman Ozzie Albies leads off in the third inning and hits a line drive single into right-center field. Travis d'Arnaud stands in and flies out to right-center field. Dansby Swanson flies out to the wall in left field. Back to the top of the order with Eddie Rosario walked to first base and advanced Albies to second base. Jorge Soler stands in and hits a monster blast over the left-field wall scoring Rosario and Albies. 0-3 Braves. The Astros make a pitching change and Brooke Raley takes the mound. Freddie Freeman hits a line drive to second base and is thrown out at first base.

Houston Astros catcher Martin Maldonado leads off the third inning and hits a line-drive single to center field. Back to the top of the order now, Jose Altuve steps in and flies out to center field. Michael Brantley hits a line drive up the infield and the Braves turn a double play.

Carlos Correa leads off for the Astros in the bottom of the fourth inning and hits a fly ball single into shallow right-center field. Yordan Alvarez hits a line drive to the second baseman, who turns a double play. Yuli Gurriel grounds to the second baseman who makes the play at first base.

Ozzie Albies leads off for the Braves in top of the fifth inning and was walked to first base. Travis d'Arnaud steps up to the place and Albies advances to second base on a wild pitch. d'Arnaud strikes out swinging. Dansby Swanson hits a two-run home run over the left-field wall. 0-5 Braves. The Houston Astros make another pitching change as Blake Taylor is the new pitcher. Eddie Rosario steps in and hits a short line drive to Taylor, who makes the play at first base. Jorge Soler is walked. Freddie Freeman hits a fly ball to the wall in left-center field, scoring Rosario. 0-6 Braves. Another pitching change by the Astros as Phil Maton is the new pitcher. Austin Riley steps in and flies out to deep center field.

Kyle Tucker begins the bottom of the fifth inning for the Astros and strikes out. Alex Bregman was struck out looking. Jose Siri and flies out to right field.

Adam Duvall leads off for the Braves and hits a line drive single into the infield gap. Joc Pederson flies out to right field. Ozzie Albies gets a base hit into right and advances Pederson to second base. Travis d'Arnaud strikes out swinging. Dansby Swanson hits to the shortstop who makes the play at first base.

Martin Maldonado starts off the bottom of the sixth inning for the Astros. He strikes out looking. Jose Altuve pops up to second base. Michael Brantley hits a line drive up the middle for a single. Carlos Correa is thrown out at first base after a passed ball.

The Houston Astros have made another pitching change giving the ball to Ryne Stanek as Eddie Rosario leads off for the Braves. Rosario strikes out swinging. Jorge Soler hits a rope along the left foul line but Bregman with the diving play gets Soler out at first base. Freddie Freeman knocks a solo home run in left-center field. 0-7 Braves. Austin Riley strikes out looking.

Yordan Alvarez leads off for the Astros in the bottom of the seventh as Tyler Matzek hits the mound for the Braves. Alvarez lines into left field for a single. Yuli Gurriel flies out to right field. Kyle Tucker flies out to right-center field where a diving play was made for the out. Alex Bregman strikes out swinging.

Ryan Pressly takes the mound for the Astros as Adam Duvall leads off in the top of the eighth inning for the Braves. Duvall flies out as Kyle Tucker and Jose Siri nearly collide in center field to make a play for the ball. Joc Pederson hits a line drive to first base where the out is made. Ozzie Albies flies out to center field.

Travis d'Arnaud begins the inning for the Braves as Yimi Garcia takes the mound for the Astros. d'Arnaud flies out to center field. Swanson hits a line drive toward Correa who makes the out. Eddie Rosario steps in and grounds out toward first base where the out is made.