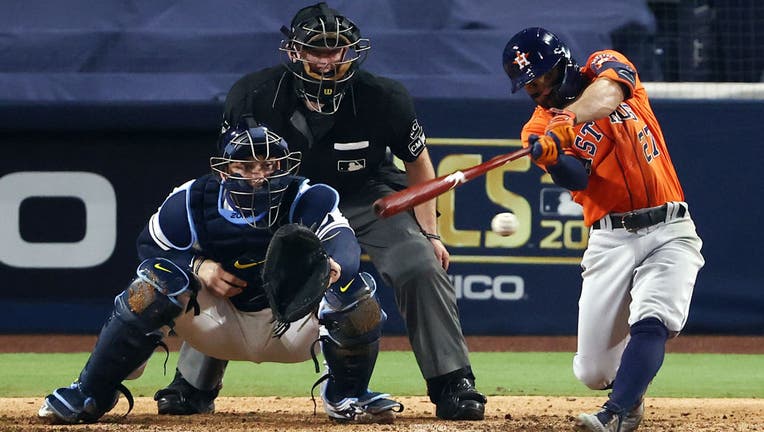 SAN DIEGO, CALIFORNIA - OCTOBER 17: Jose Altuve #27 of the Houston Astros hits a single during the eighth inning as Mike Zunino #10 of the Tampa Bay Rays looks on in Game Seven of the American League Championship Series at PETCO Park on October 17, 2

SAN DIEGO - The Houston Astros, who won three straight to even up the American League Championship Series, fell to the Tampa Bay Rays in Game 7 on Saturday night.

The Rays scoring started early with Randy Arozarena knocking a two-run home run to center field in the bottom of the first inning.

In the bottom of the second inning, Mike Zunino homered to left-center field, making the score 3-0.

It was the strong pitching early by the Rays Charlie Morton that kept the Astros bats cold. Morton recorded six strikeouts, two hits, and one walk in 5 ⅔ innings.

In the bottom of the sixth inning, Ji-Man Choi scored on a sacrifice fly by Mike Zunino.

The Astros showed some life in the top of the seventh inning, but were unable to score any runs after the Rays turned a double play.

In the bottom of the eighth, the Astros showed more life when Carlos Correa singled on a ground ball to right field with the bases loaded scoring Aledmys Diaz and Jose Altuve, making the score 4-2 Rays.

The Tampa Bay Rays will face either the Los Angeles Dodgers or Atlanta Braves in the World Series in Arlington.