Take a nap at the Galleria

A new pay-by-the-minute snooze bar is opening in the Galleria for those who need a quick recharge!

HOUSTON - The Nap Bar inside Houston’s Galleria Mall is convincing Houstonians to come out and pay by the hour to sleep in.

The new location is also a part of a co-op shop giving small businesses a great place to start.

What used to be Topshop on the north end of Galleria, is now a treasure trove of CBD products, designer dresses, and posh pollution masks. It's a collection of nearly twenty businesses under one roof, making a galleria storefront affordable for new business owners.

But with all its unique finds, it also has something for those who would prefer a rest.

Tucked away near the dressing rooms, the Nap Bar is officially opening its doors.

“NASA did a study on sleepy military pilots and astronauts and found a 26-minute nap increased their productivity by up to 34%. So I said OK I want to do my own beta test,” she adds.

After testing its science-based concept for five months in Rice Village, shoppers can now grab what she calls "clean rest"- pop in, take a nap, and refresh the five senses.

Guillory explains, “Green lights help with inflammation; blue lights help with depression, so we have mood lighting to help with your senses. Studies also suggest that when you see your favorite color of light you immediately go into a state of rest and relaxation.” 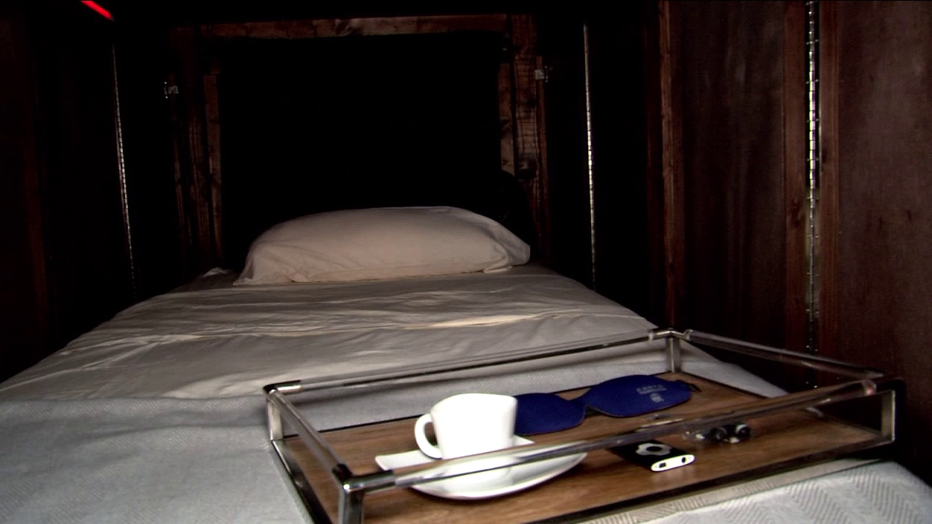 She adds L'Occitane pillow mists for smell, custom brain waves for sound and a boost in melatonin, the touch of organic sheets and hypoallergenic mattresses made in Houston, along with tastes of a pre-nap and post-nap juices for a boost.

Phone devices are turned in before rest time, and Guillory says the distraction-free setting is for anyone in need of an escape.

“You can chill, read a book, do some guided meditations,” she suggests.

The “nap pods” can also be used for nursing mothers in need of a place to pump.

“We really don't have to be go, go, go, go, go,” says Guillory. She points out the Williams-Sonoma sponsored lounge, complete with an espresso maker, where guests can hang out before and after their rest.

“We can really take our time and just ease into the next thing that we want to do on our agenda.”

Naps run a dollar a minute and with the needed expansion after the Nap Bar’s test run, people are already proving they're ready to invest in rest.

The Nap Bar will be open seven days a week from 12 p.m. to 6 p.m. A soft opening will be held Friday, and its grand opening is scheduled for November 7th.