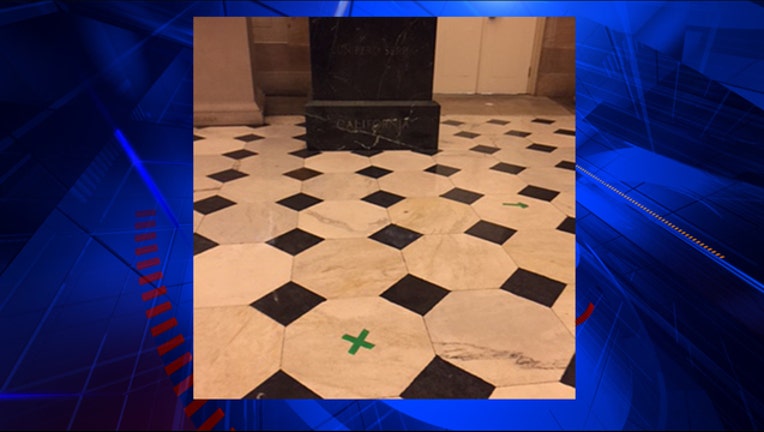 This 'X' marks a spot where Pope Francis will stand during his visit to the U.S. Capitol on Thursday, September 24, 2015 (Chad Pergram / FOX News)

WASHINGTON - When Pope Francis visits the U.S. Capitol Thursday – timing will mean everything. Crews behind the scenes have spent countless hours planning out the entire visit and hope to keep the timing down to the minute.

For starters, various duct-taped "X’s" and other stage instructions can be found everywhere inside the building. The photo above is of the "X" where Pope Francis will stand when he stops by the statue of Junipero Serra in Statuary Hall. Behind his mark is a strip of duct-tape marking where Congressional leaders will stand.

When it’s time for his exit, Pope Francis will leave through what is known as the Memorial Door, an entrance on the House side of the East Front of the Capitol where two Capitol Police Officers were shot in July, 1998. Strips of duct tape can also be found in this area positioning dignitaries for the departure. Some of the tape strips read "Biden" and "Boehner" and "Pelosi."

If you want to know how important timing is - digital clocks have been positioned almost everywhere around the Capitol in key spots to keep it the priority!

Another special touch – sets of maroon, velour drapes have been hung at certain spots around the Capitol, not only to add a level of dignity, but to keep prying eyes away from Pope Francis when he needs it most.