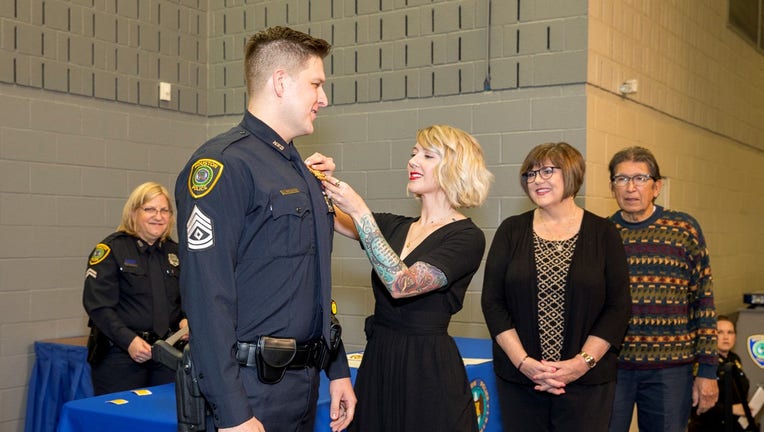 HOUSTON - Sgt. Christopher Brewster was killed in the line of duty on Saturday.

The 32-year-old was shot while responding to a domestic call in the 7400 block of Avenue I in Houston's East End.

He is remembered as being dedicated to his work and his family.

“Chris loved being a police officer. He loved it. And that’s why he joined here because he wanted to be the best that he could on the job and Crossfit training really helps with that. This is why he did that, so he could do his job to the best of his ability,” said Tsekouras, a Crossfit gym owner and retired firefighter who worked closely with Chris over the years as he pushed hard and inspired others in the gym.

Sgt. Brewster's family says the public is more than welcome to attend his visitation, which will go on until 8 p.m. this evening. In lieu of flowers, memorial donations may be made to assist the officer foundation.

Christopher Brewster was born on August 14, 1987 in Houston, Texas. He was the youngest of four children born to Lewis and Cindy Brewster. He was the youngest and only brother to his big sisters Renee, Ashley, and Lindsay. He grew up in the Sagemont area in south Houston and completed a Bachelor’s degree in Organizational Leadership from Texas A&M University-Commerce.

Chris graduated from the Houston Police Department Academy in November 2010. In his nine years of service, he was assigned to Southeast Patrol, Gang Division, and Major Offenders Division. He promoted to Sergeant in February 2019 and was assigned to Eastside Patrol. Chris was also in the process of completing his Master’s degree.

Chris is survived by his beloved wife of five years, Bethany Elise Brewster, and his best dog buddy, Brienne. He is also survived by his parents Cynthia (Rentz) Brewster and Lewis Brewster and his three sisters: Renee (Brewster) Trager and her husband Damon Trager and his niece and nephew, Mya and Benett; Ashley (Brewster) Barrera and her husband Carlos and his nephew Tomás; and Lindsay Brewster.

The services for Sergeant Christopher Brewster will be held with the visitation taking place at Sagemont Church on Wednesday, December 11 from 5 p.m. to 8 p.m. His funeral service will be held at Grace Church Houston on December 12 at 10 a.m.

In lieu of flowers, memorial donations may be made to Assist The Officer Foundation – Houston.