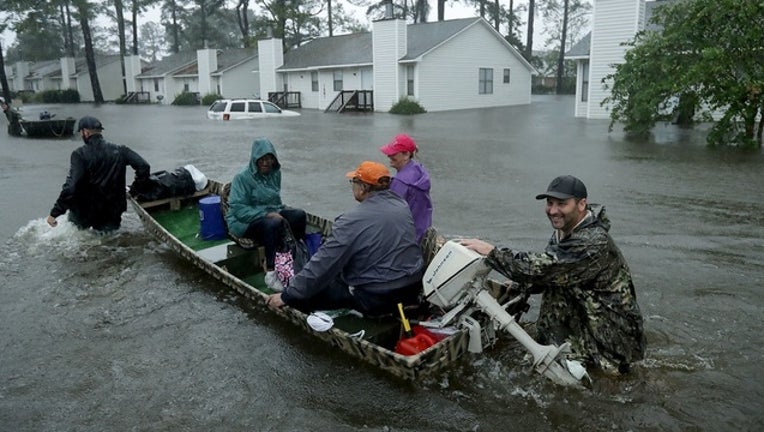 MIAMI (AP/WJZY) -- How do you measure a disaster like Florence? In sum, the storm is turning out to be every bit as devastating as forecasters expected, with trillions of gallons of rain still in the forecast, hundreds of people needing rescue, hundreds of thousands of power outages and a handful of deaths. The economic toll remains to be tallied.

Officials confirmed at least four deaths in North Carolina: A mother and infant killed in Wilmington when a tree fell on their house. In Lenoir County, a 78-year-old man was electrocuted while plugging in a generator in the rain, and a 77-year-old man died after being blown to the ground while checking on his hunting dogs.

Dozens of polluted industrial sites, chemical plants, coastal shipyards and military bases are in Florence's path, along with scores of low-lying water and sewage treatment plants at risk of flooding. Environmental groups are worried hog lagoons and coal ash dumps that could contaminate soils or rivers used as sources for drinking water.

Reporters for The Associated Press, the news site Quartz and Puerto Rico's Center for Investigative Journalism have compiled the most detailed portrait yet of the agonizing final days of victims of Hurricane Maria, interviewing 204 families of the dead and reviewing accounts of 283 more to tell the stories of heretofore anonymous victims.

The 470-mile Blue Ridge Parkway that winds through the Appalachians in Virginia and North Carolina closed at 8 p.m. Friday to vehicles, cyclists and pedestrians until further notice because of expected high winds and heavy rains. Hikers have been told to seek shelter off the Appalachian Trail to avoid falling trees, flash floods and mudslides.

Torrential rains from Florence will test South Carolina's infrastructure , which failed under nearly 2 feet of rain in 2015. A year later, flooding from Hurricane Matthew caused about 25 dams to fail. More than 3,000 maintenance workers are on standby statewide to fix broken traffic signals, barricade problem areas and make roads safe again.

Basketball great Michael Jordan, who grew up in North Carolina and owns the NBA's Charlotte Hornets, and new Carolina Panthers owner David Tepper are providing relief to those affected by Florence. Jordan said it's "devastating" to see the damage, and his organization and the NBA are "here to help." In a tweet, Tepper said the Panthers are working with charities to develop a response plan.

A family rescued from their New Jersey home by boat during Superstorm Sandy in 2012 is waiting to find out whether Florence took their new one in North Carolina. Rather than rebuild in Union Beach, New Jersey, the Liebelt family decided to start over in Wilmington, North Carolina.