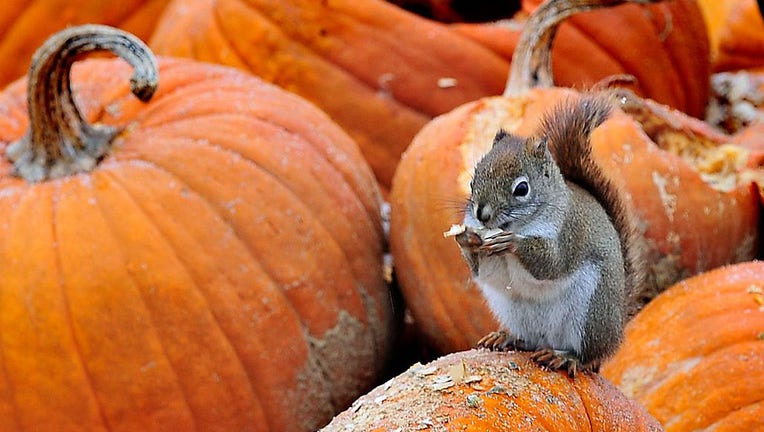 It’s that time of year when families decorate their front porches with whole pumpkins and carved jack-o-lanterns for Halloween. But they may find that squirrels and other outdoor critters are the ones playing tricks.

Here are a few tips from experts on how to safely squirrel-proof the seasonal decor:

What to put on pumpkins to keep squirrels away

There are some deterrents and repellents that may be helpful in keeping the squirrels at bay.

Capsaicin — the chemical in chili peppers that makes them spicy — will be the most effective, according to David Hillock, a consumer horticulturist with Oklahoma State University’s Department of Horticulture & Landscape Architecture.

This could be in the form of sprinkling ground cayenne pepper on the pumpkin, or as the Bob Vila website suggests, blending crushed red pepper with water and a drop of dish soap to spritz on the gourds as well.

There are also commercial squirrel repellent sprays sold at nurseries and home improvement stores for use on a pumpkin to keep the critters away. That being said, the active ingredients can be made of putrid smells like rotten eggs and predator urine, according to Willian Baird, a professor of horticulture at Michigan State University.

Experts also recommended reapplying frequently if it rains — or if the pumpkins are in sunlight.

The meaning behind teal pumpkins

While painting a pumpkin teal may seem like just an interesting decorating choice during the spooky season, there's real meaning behind the painted squash.

Other tips to squirrel-proof your pumpkins

Hillock said things like human or pet hair, soap, and other household products are not likely to be effective in keeping squirrels away.

"If the pumpkins are in a small garden and there are only a handful, they could build cages out of a woven wire mesh and secure it over the pumpkins," Hillock said. "If they are on the porch, carved or not, taking them indoors (or in a garage) during the day or when no one is around can reduce damage."

Cleanly removing all seeds and strings from the inside of a jack-o-lantern could make the pumpkin less tempting for scavengers, according to BobVila.com, the home improvement star’s ideas and advice website. It also suggests placing bowls of strong-smelling vinegar near the pumpkins, but not directly on them since the acetic acid can damage the skin of the fruit.

Slathering petroleum jelly over pumpkins could be a squirrel turnoff, and if all else fails, place a statue of an owl, hawk, or some type of squirrel predator near the fall display.

Teal pumpkins: They're not just for decoration