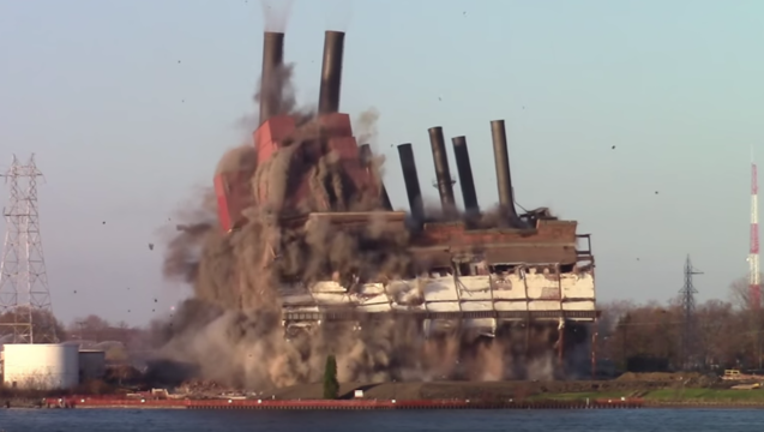 MARYSVILLE, Mich. (AP) — A 93-year-old Michigan power plant known as "Mighty Marysville" imploded Saturday, with thousands of people in the U.S. and Canada watching its towering smokestacks collapse in a blizzard of noise and dust.

The planned destruction of the unused plant, 55 miles northeast of Detroit, attracted spectators on both sides of the St. Clair River, which separates Michigan and Ontario, Canada.

"Wow! That's about it," said Christy Greenlaw after the blast, which lasted roughly 20 seconds. "It happened a lot quicker than I expected."

DTE Energy closed the coal-burning Marysville plant, which employed up to 250 people, in 2001. There are now plans to use the property for stores, housing, a marina and bike trails.

The implosion left a mountain of rubble along the river, The Times Herald of Port Huron reported.

"It's a great day when nothing goes wrong," said Matt Graham, a member of the St. Clair County sheriff's dive team.

No countdown or siren preceded the blast. "A lot of people are going to be crying because they didn't get their cameras ready," said Marysville native Rick Dzurnak.