Uvalde schools fire ex-Texas trooper who was at shooting

Following new outrage by Uvalde parents, school officials Thursday abruptly fired a former Texas state trooper who was on scene of the Robb Elementary School massacre and then hired by the school district after the shooting that killed 19 children and two teachers.

UVALDE, Texas - Following new outrage by Uvalde parents, school officials Thursday abruptly fired a former Texas state trooper who was on scene of the Robb Elementary School massacre and then hired by the school district after the shooting that killed 19 children and two teachers.

The firing came after CNN reported that Crimson Elizondo, who resigned from the Texas Department of Public Safety after the May 24 attack, was hired by the Uvalde school district following one of the deadliest classroom shootings in U.S. history.

Elizondo was among more than 90 state troopers — and nearly 400 law enforcement officers in all — who rushed to Robb Elementary during the massacre but waited more than an hour to confront a gunman with an AR-15-style rifle shooting inside a fourth-grade classroom.

Students and staff in Uvalde return to school Tuesday for the first time since the massacre at Robb Elementary. Some parents are questioning if changes made to safety are enough.

In police body camera footage, CNN reported, Elizondo is heard telling other officers at the scene of Robb Elementary: "If my son had been in there, I would not have been outside. I promise you that."

Elizondo, whose profile was on the Uvalde school district’s website Thursday morning, had been removed by the afternoon.

"We sincerely apologize to the victim’s families and the greater Uvalde community for the pain that this revelation has caused," the district said in a statement.

The statement did not address whether Uvalde school officials knew Elizondo was on the scene of the attack or her involvement. A district spokesperson did not immediately return messages Thursday.

Hours before the firing, families had gathered outside the Uvalde Independent School District’s administrative office to protest the hiring.

Tuesday it was revealed that 5 DPS officers are under investigation for their role in the botched response for the shooting.

"We are disgusted and angry at Uvalde Consolidated Independent School District’s (UCISD) decision to hire Officer Crimson Elizondo. Her hiring puts into question the credibility and thoroughness of UCISD’s HR and vetting practices," a statement from some of the victims’ families said. "And it confirms what we have been saying all along: UCISD has not and is not in the business of ensuring the safety of our children at school."

In July, a damning report cited "egregiously poor decision-making" by law enforcement officers who waited more than an hour before confronting the 18-year-old gunman. The campus police chief, Pete Arredondo, was fired in August.

"A DPS trooper was on scene within two minutes of the shooter and failed to follow training, protocol, and the duty they were sworn to," he said. "People’s children died because DPS officials failed to do their job." 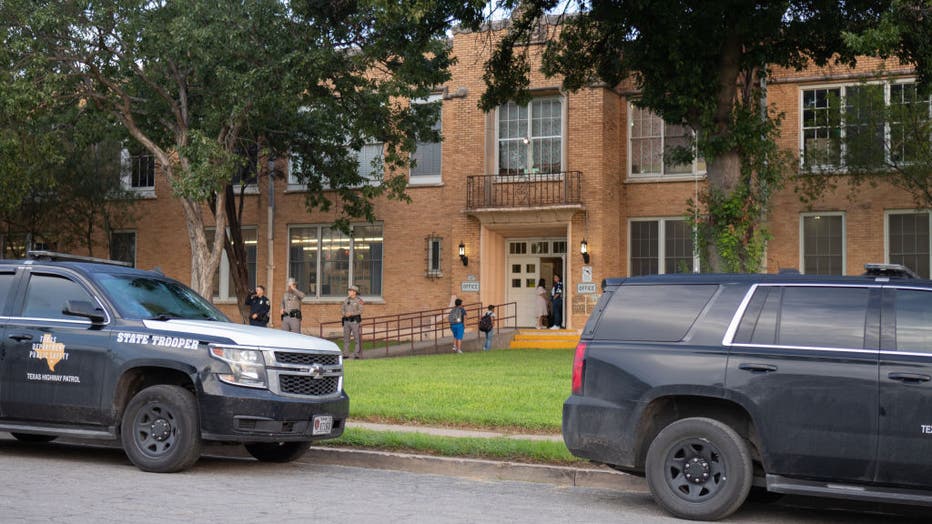 UVALDE, TEXAS, US - SEPTEMBER 06: Kids walk past two law enforcement on their way into school as students go back to school months after deadly US shooting in Uvalde, Texas, United States on September 06, 2022. Students and parents in Uvalde began th

Speaking at an event in New Braunfels, Gov. Greg Abbott placed the blame on the district.

"That school district had full information about the status of the person they choose to go ahead and hire," he said. "And it's up to the school district, not DPS, not anybody else, to have to own up to the poor decision that they made."

According to DPS records released Thursday, Elizondo is one of at least seven troopers under internal investigation over their actions at Robb Elementary.

When Uvalde CISD requested a background check, DPS sent back a letter pointing out she was under investigation.