Dr. Rochelle Walensky, director of the U.S. Centers for Disease Control and Prevention, outlined increases in COVID-19 deaths, cases and hospitalizations during the White House COVID-19 press briefing on Thursday.

MCDONOUGH, Ga. - As Tussahaw Elementary opened this week for a new school year, teary-eyed mothers led in kindergartners dwarfed by backpacks and buses dropped off fifth graders looking forward to ruling their school. The biggest clue to the lingering COVID-19 crisis was the masks worn by students and teachers — but not all of them.

Georgia, like most states, is leaving it up to local schools to decide whether to require face coverings. And 43,000-student Henry County, like many districts worn out by months of conflict over masks, has decided not to insist on them.

Instead, they are "highly recommended."

Many parents Wednesday in this suburb south of Atlanta had mixed feelings about the policy. Some kept their children home in disagreement with it. Others sent their youngsters to class with face coverings.

Shatavia Dorsey, the mother of a kindergartner and a fifth grader, said her children are going to wear their masks at school regardless of the rules.

"They’re not vaccinated because they’re too young, and I don’t know if someone else is carrying it in," said Dorsey, who is doubtful about the school system's ability to maintain in-person instruction amid rising infections.

With the delta variant spreading rapidly, the Centers for Disease Control and Prevention and the American Academy of Pediatrics have advised in recent weeks that everyone in schools wear masks in communities with substantial or high transmission. 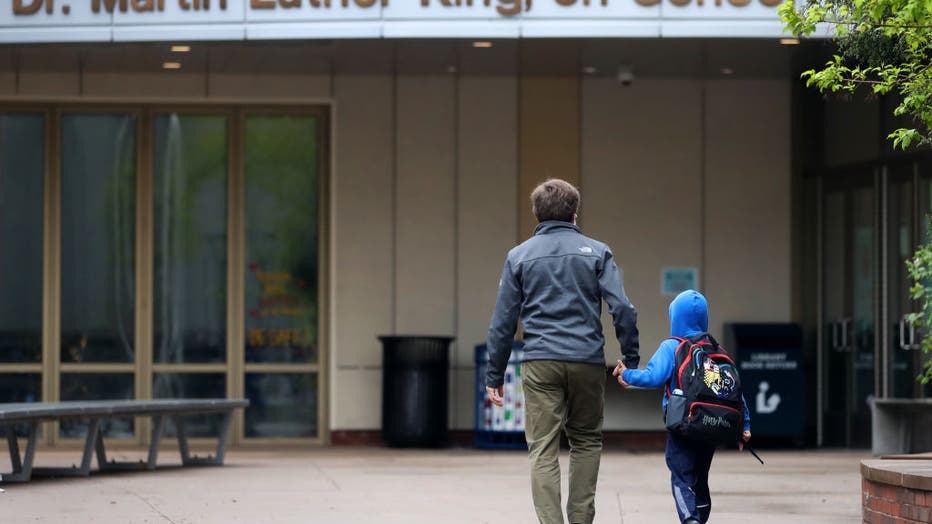 Educators have had to contend with strong resistance to masks from some parents and political leaders. Some consider mask rules an intrusion on parents' authority to make decisions about their children’s health.

California, Louisiana, New Jersey, Oregon and Washington state intend to require masks for all students and teachers regardless of vaccination status. At the other end of the spectrum, Arkansas, Arizona, Florida, Iowa, Oklahoma, South Carolina, Texas and Utah have banned mask requirements in public schools.

Republican Gov. Ron DeSantis of Florida said Thursday the decision of whether to wear masks in school should be made by parents, adding: "What are the harmful effects of putting a kindergartener in a mask for seven hours? Have they talked about the emotional, the academic, the physiological? Why isn’t CDC studying that?"

Outbreaks that have hit schools at the very start of the year have added to calls for more mask requirements.

RELATED: 40% of all COVID-19 hospitalizations in Florida, Georgia, and Louisiana, CDC says

In Marion, Arkansas, over 800 students and staff members have been quarantined because of exposure since classes began last week in the 4,000-student district.

Marion Superintendent Glen Fenter urged lawmakers to overturn the state law banning masks, warning that a "full-blown crisis" could lie ahead. And Republican Gov. Asa Hutchinson expressed regret over signing the ban in the first place and asked that it be lifted. But the GOP-controlled Legislature left it in place Friday.

Later in the day, an Arkansas judge blocked the state from enforcing the ban until further notice.

In yet another fight over the issue Friday, the Florida Board of Education applied pressure to discourage schools from making masks mandatory. The board said it will issue tuition vouchers so that parents who object to mask requirements can send their children to private school. The money would be taken out of public schools' funding.

From the beginning of the pandemic to the peak of infections in January, CDC data showed children 15 and under had the lowest infection rates. Now, though, school-age children have infection rates higher than adults 50 and older.

Henry County recorded 111 cases of COVID-19 in children ages 5 to 17 in the two weeks ending July 28. Its per capita rate is one of the highest in Georgia and higher than the nationwide figure.

Henry County Superintendent Mary Elizabeth Davis said she believes schools have learned how to prevent transmission, citing intensified cleaning, air filtration and use of hand sanitizer. The district is also offering its 6,000 employees $1,000 bonuses to get vaccinated.

"We are highly recommending that individuals opt for a mask as an added layer of prevention, but we also know so much more today than we did a year ago," Davis said, wearing an "I got vaccinated" sticker. "And what we know today is that schools are not catalysts for community spread."

At least 28 of Georgia's more than 180 school districts are requiring masks, encompassing more than 38% of the state’s public school students.

At Tussahaw Elementary, more than 60% of students were wearing masks in four classrooms visited by a reporter Wednesday, though some had pulled them down. In only one room, where the teacher was also unmasked, were a majority of students without face coverings.

What parents at Tussahaw really wanted was some normalcy — an end to trying to help children at home learn virtually, or cycling between in-person school and quarantine.

"We weathered the storm, but it's a lot better being back in the classroom," Bryant Thigpen said after dropping off his son for the first day of fifth grade. He said he thinks the school system should require masks — "at least until the cases go down."

Daniel Denny sent both his children to Tussahaw with masks but said face coverings should be up to parents.

"To each his own," he said. "You take care of your household how you choose."

Kimberly Vining, a parent of two middle school students, strongly approved of the policy, saying it will make things much easier for children with asthma or anxiety about wearing masks.

"I have faith in God and I'm not going to live in fear for a virus that has a 98% survival rate," she said.

Overall, 90% of Henry County students are back in person, while 10% are opting for all-virtual instruction or a combination of both.

Holley Freeman's 8-year-old daughter, Kalani, is one student who will be staying home and learning virtually. Freeman said that members of her household have health problems and that with no mask mandate, it would be unsafe for her daughter to go to school.

She said her daughter took the news hard: "She cried all the way home and cried all night and cried this morning, knowing she had to go online again."