Interest rates rise again: How you can make a home loan more affordable

Just last week, the feds raised interest rates again by three-quarters of a percent. The rising rates make buying a home even more expensive and out of reach for some buyers. So what can you do?

The average long-term U.S. mortgage rate topped 7% for the first time in more than two decades this week, a result of the Federal Reserve's aggressive rate hikes intended to tame inflation not seen in some 40 years.

Mortgage buyer Freddie Mac reported Thursday that the average on the key 30-year rate jumped to 7.08% from 6.94% last week. The last time the average rate was above 7% was April 2002, a time when the U.S. was still reeling from the Sept. 11 terrorist attacks, but six years away from the 2008 housing market collapse that triggered the Great Recession.

"We’re really viewing this as a spike in mortgage rates that is pretty dramatically impacting affordability in the market, really sharply curtailing demand," said Mike Fratantoni, chief economist at the Mortgage Bankers Association.

Many potential homebuyers have moved to the sidelines as mortgage rates have more than doubled this year, a trend that's knocked the once red-hot housing market into a slump.

Sales of existing homes have declined for eight straight months as borrowing costs have become too high a hurdle for many Americans already paying more for food, gas and other necessities. Meanwhile, some homeowners have held off putting their homes on the market because they don’t want to jump into a higher rate on their next mortgage.

Mortgage rates have risen sharply along with the 10-year Treasury yield, which has been climbing amid expectations that the Federal Reserve will keep hiking interest rates in its bid to bring down inflation. 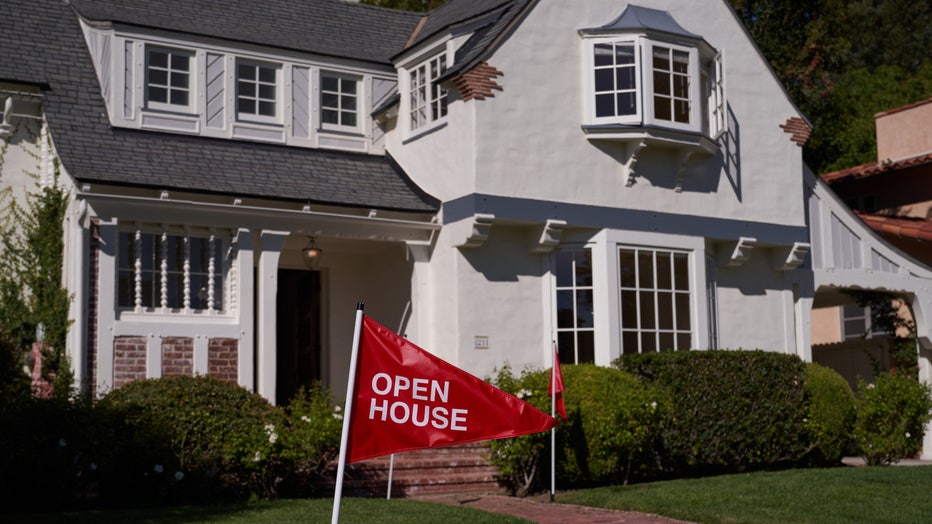 An 'open house' flag is displayed outside a single family home on September 22, 2022 in Los Angeles, California. (Photo by Allison Dinner/Getty Images)

The Fed has raised its key benchmark lending rate five times this year, including three consecutive 0.75 percentage point increases that have brought its key short-term borrowing rate to a range of 3% to 3.25%, the highest level since 2008. At their last meeting in late September, Fed officials projected that by early next year they would raise their key rate to roughly 4.5%.

While mortgage rates don’t necessarily mirror the Fed’s rate increases, they tend to track the yield on the 10-year Treasury note. That’s influenced by a variety of factors, including investors’ expectations for future inflation and global demand for U.S. Treasurys.

The Fed is expected to raise its benchmark rate another three-quarters of a point when it meets next week. Despite the rate increases, inflation has hardly budged from 40-year highs, above 8% at both the consumer and wholesale level.

Higher mortgage rates reduce homebuyers’ purchasing power, resulting in fewer people being able to afford to buy a home at a time when home prices continue to climb, albeit more slowly than earlier this year.

READ MORE: Here’s how much money you should be saving per paycheck

The combination of higher rates and home prices means a typical mortgage payment for a homebuyer is up hundreds of dollars compared to what it was earlier this year.

The monthly payment on a median priced home is 78% higher now than it was a year ago for buyers who are able to make a 20% down payment. This translates to a $1,000 increase in the typical home payment in just the last year, according to Realtor.com.

To cope, some homebuyers are opting for adjustable-rate mortgages, which don’t make it any easier to qualify for financing, but offer lower monthly payments in the first few years of the loan term.

Such loans became less attractive the last couple of years as average long-term mortgage rates fell to an all-time low. But as of August they made up about 20% of home loan originations, said Selma Hepp, chief economist at CoreLogic.

"It speaks to that reduction in purchasing power consumers are having to contend with because of higher mortgage rates," she said.