President Biden reiterated his determination to invest in the $2 trillion American Jobs Plan and $1 trillion American Families Plan — two major pieces of his agenda that are meant to create good-paying jobs, expand economic opportunities for all Americans and help Americans outcompete the rest of the world.

Barely more than a year after the coronavirus caused the steepest economic fall and job losses on record, the speed of the rebound has been so unexpectedly swift that many companies can’t fill jobs or acquire enough supplies to meet a pent-up burst of customer demand.

"Things exploded — it was like a light switch," said Kirby Mallon, president of Elmer Schultz Services, a family-owned Philadelphia firm that repairs and maintains kitchen equipment for restaurants and other clients. "The labor market is just out of control. We literally cannot hire technicians ... We ramped up so quickly, the supply chain wasn’t ready for it.’’

RELATED: US unemployment claims drop to 385,000, another pandemic low

Economic forecasters, with little historical precedent to guide them through the aftermath of a global pandemic, are pondering questions they can’t answer with any confidence:

Does robust consumer spending reflect economic strength and resiliency? Or has it been temporarily propped up by federal stimulus checks?

Was an April run-up in consumer prices a temporary blip? Or an ominous sign of accelerating inflation?

Are two months of middling job growth the result of too much of a good thing — employers want to hire more than they can? Or a hint that the labor market isn't as strong as economists think?

In many ways, the news has been cause to cheer: The economy grew from January through March at a red-hot 6.4% annual pace. And in the current quarter, that pace is thought to be accelerating to nearly double-digits.

Yet the full portrait of the U.S. economy is a rather more nuanced one. Here is a closer look at five vital signs:

Employers last month added 559,000 jobs on top of 278,000 in April. Those would ordinarily be seen as quite healthy numbers. Yet against the backdrop of record-high job openings and free-spending consumers, forecasters had expected much more hiring. Some economists had envisioned the recovery from the pandemic recession driving monthly job growth of 800,000, 900,000, even 1 million or more.

What explains the shortfall?

Economists point mainly to what they call a short-term mismatch: Companies are posting job openings faster than applicants can respond. After all, many Americans are contending with considerable tumult at home — health issues related to COVID-19, child-care problems with schools slow to reopen, career uncertainty after many jobs permanently vanished over the past 15 months. And some people, earning more from federal and state jobless aid than they did when they worked, are taking their time before pursuing another job.

Some say the labor shortage is nothing that can’t be solved the old-fashioned way: By raising pay and offering more generous benefits and working conditions. In fact, that process appears to have begun: Average hourly wages rose solidly in April and May.

Consider Gina Schaefer, who owns 13 Ace hardware stores in Maryland, Virginia and Washington, D.C., and who has been rapidly staffing up for the spring and summer, when her sales typically hit highs.

Schaefer has hired nearly 120 people since March, both seasonal workers and long-delayed replacements for people who left last year when COVID ravaged the economy. Her company pays a minimum of $15.50 an hour, to compete with larger chains that now pay $15, and provides health insurance, paid vacation, sick leave and a 401(k) plan after employees have been on the job for about six months.

"We firmly believe that better workplaces do not have a problem finding employees," she said. 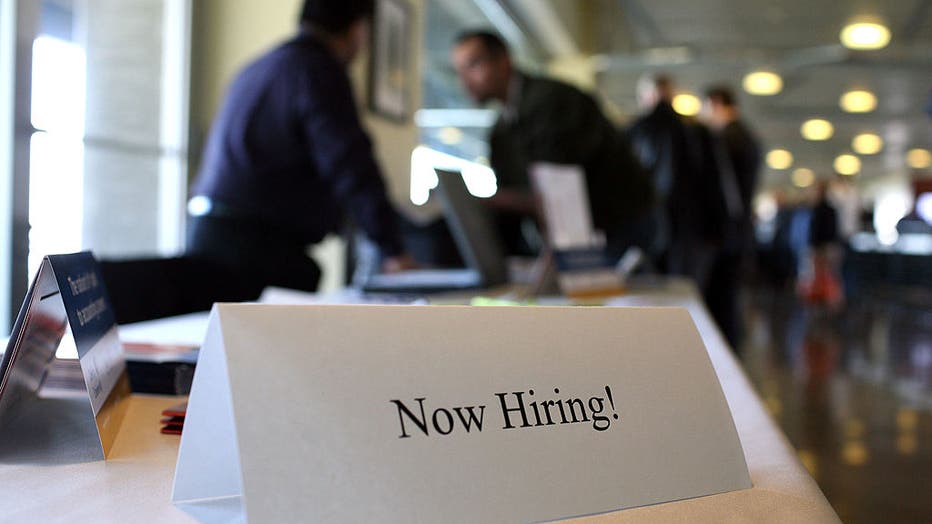 A "now hiring" sign is posted on a table during the Recruit Military Career Fair March 19, 2009 at AT&T Park in San Francisco, California. Hundreds of military veterans attended the career fair that was open only to veterans. (Photo by Justin Sul

After months cooped up at home, millions of consumers have rushed back out again, in buoyant spirits and eager to spend, their finances bolstered by $1,400 federal stimulus payments earlier this year. Among the affluent, sharp gains in home and stock market equity have further emboldened their impulse to spend.

Consumer confidence is high. And Americans stepped up their spending again in April after a powerful gain in March fueled by $1,400 stimulus checks to most individuals.

That said, Rubeela Farooqi, chief U.S. economist at High Frequency Economics, sees cautionary signs. Confidence and spending, though still healthy, have trended lower. And retail sales were flat in April after having surged in March, suggesting that the positive effect of the stimulus checks might have faded. Similar trends occurred late last year after the effects of earlier federal stimulus money began to wear off.

In addition, a monthly survey of consumer confidence by the Conference Board found that expectations for the next six months actually fell in May.

"I’m not sure how this is going to pan out,’’ Farooqi says.

Financial markets endured an unwelcome jolt last month when the Labor Department reported that consumer prices had jumped 0.8% from March to April and 4.2% from 12 months earlier — the largest year-over-year increase since 2008.

Some leading critics, including former Treasury Secretary Larry Summers, have been warning that President Joe Biden’s trillions of dollars in federal stimulus money risk igniting inflation and forcing the Federal Reserve to resort to interest rate hikes, which could derail the economic recovery.

But Fed Chair Jerome Powell and many economists say they think the inflation surge will prove short-lived. They say it reflects mainly temporary supply-chain bottlenecks that have forced up prices but that should ease over time. For now, though, shortages of lumber, computer chips and other materials have contributed to inflation pressures.

Mallon at Elmer Schultz Services in Philadelphia said supply shortages are so severe in his industry that members of the the Commercial Food Service Equipment Association trade group are sharing inventory.

The housing market has served as a source of economic strength and resilience during the pandemic, supported by ultra-low mortgage rates and the desire of many locked-down families to move to more spacious digs to accommodate work-from-home needs.

But with prices having risen beyond the reach of many and with the supply of homes for sale severely limited, the housing boom has lately shown signs of fatigue. Home construction tumbled 9.5% in April — a drop that economists attributed, at least in part, to builders postponing projects because of accelerating costs for lumber and other supplies that have contributed to swelling home prices.

RELATED: Sales of new US homes fell 5.9% in April in wake of soaring house prices in March

In April, sales of new homes dropped nearly 6%, and purchases of existing homes fell 2.7%. Many would-be buyers will remain on the outside looking in as long as a shortage of available homes keeps sale prices elevated.

U.S. factories are thriving despite the clogged supply chains and the shortage of workers. The Institute for Supply Management’s manufacturing index rose to 61.2 last month. Any reading above 50 signals growth, and manufacturers have been on a 12-month winning streak.

Half the purchasing managers surveyed by the trade association said they had had trouble finding workers. Given the supply problems, it's unclear whether factories can sustain their steady output: The ISM found that deliveries from suppliers were coming in at their slowest rate since 1974. Sixteen of 18 industries reported slower deliveries.