The misdemeanor and felony charges include assaults on federal officers, arson and damaging federal property.

“Violent agitators have hijacked any semblance of First Amendment protected activity, engaging in violent criminal acts and destruction of public safety,” Billy Williams, the U.S. attorney for Oregon, said in a statement.

Portland has been gripped by nightly protests since the police killing of Floyd in Minneapolis. The demonstrations, often violent, usually target police buildings and federal buildings. Some protesters have called for reductions in police budgets while the city’s mayor and some in the Black community have decried the violence, saying it’s counterproductive.

Protesters and U.S. agents assigned to protect federal property in Portland clashed late Wednesday outside a U.S. Immigration and Customs Enforcement building in another night of violence.

Some people in a crowd of about 200 disabled or vandalized building security cameras, shined laser lights at the agents and threw rocks and bottles at them, Portland police said in a statement issued Thursday. A federal agent was injured after being hit in the leg by a rock, and police made 11 arrests, police said.

Portland’s FBI chief on Wednesday said he is shifting the agency’s resources to focus more heavily on the protests. 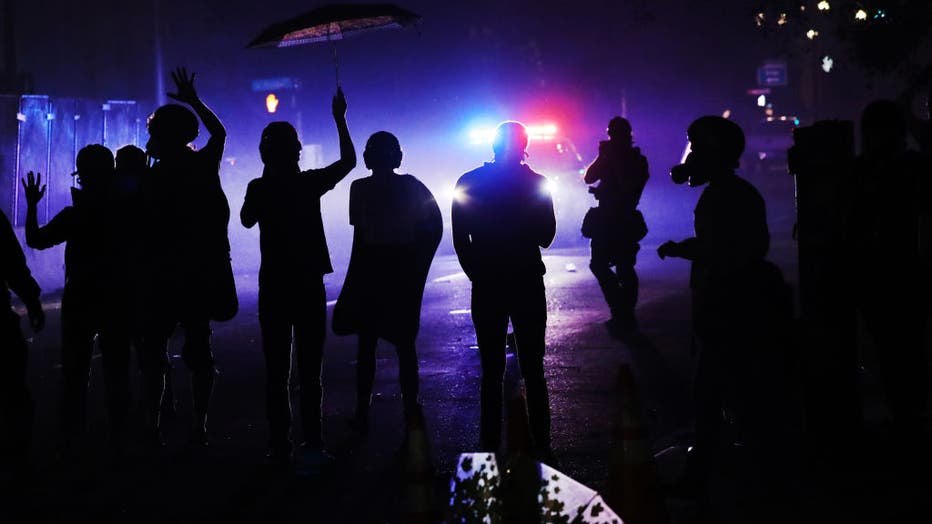 People gather to protest in front of the Mark O. Hatfield federal courthouse in downtown Portland as the city experiences another night of unrest on July 27, 2020 in Portland, Oregon. (Photo by Spencer Platt/Getty Images)

On Thursday, local prosecutors said they had resolved the first felony case related to the protests when the defendant pleaded guilty.

Rollin Tristan Fodor, 18, entered the plea on a charge of first-degree arson and was sentenced to 45 days of time served, community service and three years of probation.

As part of the plea, Fodor admitted he started a fire in an industrial-sized trash bin outside a beauty supply store near a police precinct during demonstrations on June 26.

Mike Schmidt, Multnomah County’s newly elected prosecutor, has said he would dismiss lower-level, non-violent charges against hundreds of people arrested since late May during nightly protests. Felony crimes such as arson, however, will be prosecuted.