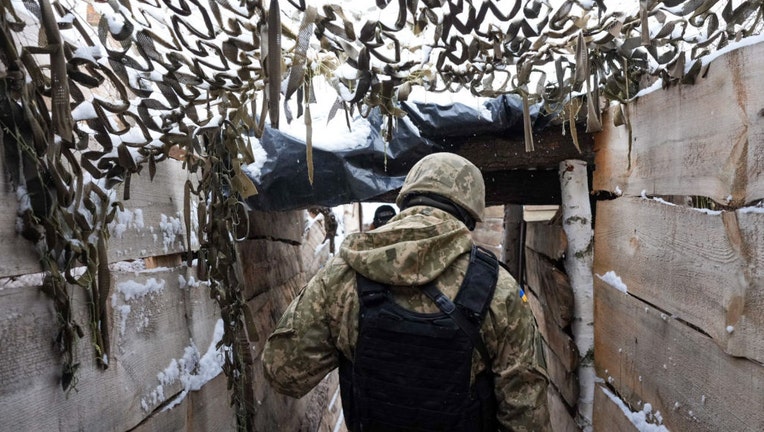 Ukrainian soldiers patrol the trenches along the frontline near the town of Zolote-4, Ukraine on January 19, 2022. (Photo by Wolfgang Schwan/Anadolu Agency via Getty Images)

A member of Ukraine's National Guard on Thursday opened fire on his fellow soldiers, killing five people and wounding five more, Ukraine's Interior Ministry said. The serviceman was detained by police but his motives remain unclear.

The incident occurred in the city of Dnipro, 500 kilometers (310 miles) southeast of Kyiv on Thursday morning. The soldier, identified by the authorities as Artemiy Ryabchuk, 20, was on guard duty at a military factory and opened fire on his colleagues, fleeing the scene immediately after.

Four soldiers and one civilian died, and five more people sustained injuries. Police detained Ryabchuk shortly after the shooting. It wasn't immediately clear what prompted him to open fire.

"I expect law enforcement to fully inform the public about all the circumstances of the crime. Motives of the killer, how (the shooting) became possible — everything should be analyzed as thoroughly as possible," Zelenskyy said in an online statement, adding that conclusions should be drawn from the incident about personnel in the National Guard.

The shooting took place against the backdrop of soaring tensions between Russia and Ukraine. Moscow has massed an estimated 100,000 troops near its borders with Ukraine, stoking fears that such a buildup might indicate plans to invade its ex-Soviet neighbor.

The Kremlin denied harboring such plans, but demanded security guarantees from the West, including a clause precluding NATO from accepting Ukraine and other former Soviet states as members — a demand the U.S. and NATO have rejected as a nonstarter.

Ukraine's officials have acknowledged the threat of an invasion, but insisted it was not imminent and accused Russia of fomenting tensions and fear among Ukrainians in order to destabilize the country from within.