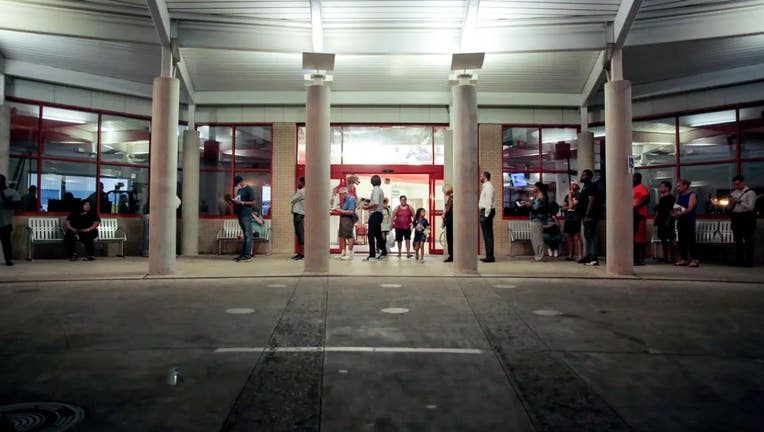 Voters wait in line after 7 p.m. at the Metropolitan Multi-Service Center in Houston on Nov. 8. It was one of the Harris County polling locations open until 8 p.m. on Election Day. Credit: Briana Vargas for the Texas Tribune

**EDITOR'S NOTE: The original headline to this story was shortened/abbreviated for length**

The Texas Supreme Court ruled Tuesday that Harris County can include about 2,100 ballots cast during an extra hour of Election Day voting when officials certify the midterm results. But the state’s highest civil court also ordered Harris County to determine whether those late-cast ballots would affect the outcome of any races — and kept alive Attorney General Ken Paxton’s challenge to counting them.

It’s a win, at least temporarily, for Harris County officials in a fight against Paxton’s attempt to discard thousands of midterm ballots as election results are set to be certified Tuesday.

In an interview Tuesday, Harris County Attorney Christian D. Menefee said that about 2,100 provisional ballots cast after 7 p.m. Election Day should be counted. Those ballots were cast after a district court judge ordered Harris County polling places to remain open an extra hour because many locations had opened late that morning.

"The votes that were cast during that time period pursuant to a court order are still perfectly legal. And there’s nothing in the law that prohibits them from being counted," Menefee said. "So our perspective is that those provisional ballots are no different than any other provisional ballots — they are to be counted."

Harris County officials argued as much in a filing to the Texas Supreme Court on Tuesday. That came one day after Paxton petitioned the Supreme Court to toss the late-cast ballots.

Paxton’s office did not immediately respond to requests for comment Tuesday.

The Texas Trio discusses comments from Texas Sen. Paul Bettencourt on issues surrounding the integrity of the Harris County midterm elections, the prospect of property tax relief, and what will happen with the $27 billion state surplus.

In at least one race, the provisional ballots could impact the outcome. After provisional and mail-in ballots were counted, the incumbent for Harris County’s 180th Criminal State District Court, DaSean Jones, went from trailing Republican Tami Pierce to leading by less than 500 votes, the Houston Chronicle reported.

After about a dozen locations in Harris County opened late on Election Day, the Texas Organizing project, along with the Texas Civil Rights Project and the ACLU of Texas, sought a court order to keep polls open after 7 p.m. A district judge granted the order to extend voting hours in Harris County.

On election night, the Texas Supreme Court ordered that any of the ballots cast after 7 p.m. be separated from other ballots. In a filing to the Supreme Court on Monday, Paxton acknowledged issues at polling sites but argued they did not justify extending the time that locations remained open.

"A trial court’s last-minute intervention only made matters worse," he wrote.

Politics or a broken system? A new investigation has been launched in Harris County following election day issues at polling locations.

Harris County was similarly ordered to extend voting in 2018 at nine polling places, but the state does not appear to have challenged those votes at the time. This year, Bell County in Central Texas was also ordered to keep polling places open an extra hour on election night, but elections administrator Desi Roberts told Votebeat and The Texas Tribune on Tuesday that decision had not been challenged by the attorney general’s office or any other party.

Harris County commissioners are set to meet at 2 p.m. Tuesday to certify the canvass of the election. The certification must be done by the end of the business day Tuesday. Although there’s no penalty for submitting the certification to the secretary of state’s office late, counties who fail to do it on time — which is rare — could face a court order to do so, secretary of state spokesperson Sam Taylor said.

Harris County was faced with another election integrity debacle just two months ahead of an important legislative session. Texas Sen. Paul Bettencourt discusses the prospect of property tax relief and what could be done with the $27 billion state surplus.

And the canvass and certification of the results is needed if candidates or parties are seeking to contest election results, Taylor said.

"If someone wants to contest the election or request a recount, then they’ve got 30 days after the canvass to do so," he said. "So the canvass actually starts the clock for a candidate or party to file an election contest if they’re gonna go that route."

The Texas Election Code dictates that votes cast during extended hours should be cast as provisional ballots, but they are largely treated as regular ballots. However, the secretary of state’s office, which oversees elections in the state, advises counties to segregate the actual ballots in the event of an election contest or a legal challenge.

"If there is an election contest or litigation, they know which ones were cast during the extended hours and don’t have to go back through and separate them out again," Taylor said.

Lina Hidalgo laid out her plans following her reelection as Harris County Judge in the November election. Here's what she had to say.

If no party or candidate objects to them being included, the votes are "presumed to be included" in the final count, Taylor said.

Harris County officials have fielded a barrage of criticism and litigation over how the midterm elections were administered after scattered complaints from voters and news reports painted a picture of "widespread problems" and dysfunction at polling places, some of which opened late and some of which didn’t have enough ballot paper. The county still can’t describe how pervasive the problems were at its 782 polling places and whether any were severe enough to prevent people from voting.

Gov. Greg Abbott called for an investigation of the election issues due to potential "malfeasance." The Harris County district attorney launched an investigation alleging at least 23 polling locations had shortages of paper ballots.

Hani Mirza, voting rights program director with the Texas Civil Rights Project, said the filings from Paxton and calls for investigations not only intimidate voters but also the people and community members running the election there.

"Voters got equitable relief for those delayed polling locations by getting the extra hour. And that’s how the process is supposed to work. But then this kind of witch hunt that is happening on the part of the state is not in good faith. It’s self-interested. It’s just continuing to target Harris County, to make it tougher for [election workers] to do their job."

For the second time this year, Harris County has failed to get all of the ballots counted in 24 hours after election. FOX 26's political reporter Greg Groogan explains more.

Paxton and Abbott are Republicans, like all of Texas’ other officials elected statewide. Harris, the state’s most populous county, leans Democratic.

"To me, this is nothing more than the attorney general playing politics to dispute the result of Harris County elections," Menefee, the Harris County attorney, said. "We’re hopeful that the court is gonna do the right thing by Harris County residents, particularly those folks who went and cast a ballot and deserve to have their voice heard."

Disclosure: The Texas secretary of state has been a financial supporter of The Texas Tribune, a nonprofit, nonpartisan news organization that is funded in part by donations from members, foundations and corporate sponsors. Financial supporters play no role in the Tribune's journalism. Find a complete list of them here.