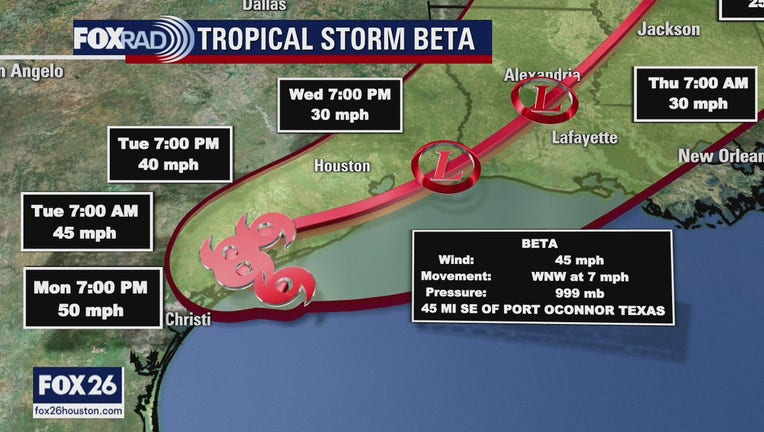 HOUSTON - Tropical Storm Beta is moving toward the central Texas coast and is expected to make landfall on Monday.

Beta is expected to slowly move up the Texas coast this week. The primary hazards are coastal flooding with a 3-4 foot storm surge and isolated bands of very heavy rain.

Beta has maximum sustained winds of 45 mph, with higher gusts. According to the National Hurricane Center, little change in strength is forecast before Beta reaches the coast.

Beta is located about 65 miles south-southwest of Freeport and about 45 miles southeast of Port O’Connor on Monday morning.

The tropical storm is moving toward the west-northwest near 7 mph, and that general motion is expected to continue on Monday. According to the NHC, a decrease in forward speed and a sharp turn to the north and northeast are expected on Tuesday.

The NHC says the center of Beta will likely move inland by Monday night, and Beta is forecast to remain close to the southeast Texas coast on Tuesday and Wednesday.

Beta is expected to weaken once it moves inland.

A Flash Flood Watch is in effect through Tuesday evening for the following counties:

According to the National Weather Service, prolonged heavy rainfall from Tropical Storm Beta will have the potential to produce rainfall totals averaging 5 to 10 inches with isolated amounts around 15 inches as the system slows down after moving inland.

A Storm Surge Warning is now in effect for:

A Tropical Storm Watch is in effect for:

Jeff Lindner, meteorologist with the Harris County Flood Control District, is monitoring Tropical Storm Beta. He discusses the effects of the tropical storm.

Chambers County Judge Jimmy Slyvia has also issued a voluntary evacuation warning ahead of the storm.

Galveston County Judge Mark Henry has issued a voluntary evacuation order for the Bolivar Peninsula in preparation for Tropical Storm Beta. Residents are strongly encouraged to seek safety further inland for the duration of the storm. Henry added that the peninsula could become cut off from the rest of the county and emergency services could be impacted.  Elevated tides are expected to be four to six feet starting on Saturday evening and lasting until mid-week.

City of Galveston Mayor ProTemp Craig Brown has issued a voluntary evacuation of the West End (west of the Seawall) and low-lying areas of the island in response to the high tides and rainfall expected.

Liberty County has issued a voluntary evacuation is being recommended for persons living in flood-prone and low-lying areas of Liberty County.

The Matagorda County Emergency Operations Center has issued a voluntary evacuation recommendation for the community of Sargent, the township of Matagorda, and the bayfront area of the City of Palacio.

What’s in a (tropical) name, anyway?

The name ‘Wilfred’ was last on the list for Atlantic storm names for the 2020 season, completing the English alphabet where nearly all letters are assigned a corresponding name. The only letters left out the naming process are Q, U, X, Y, and Z.

So what’s in a name anyway? The World Meteorological Organization (WMO) is in charge of naming tropical cyclones all over the globe. The practice of naming tropical cyclones began since it seemed easier to identify storm-systems in tropics. According to the WMO’s website, ‘Experience shows that the use of short, distinctive given names in written as well as spoken communications is quicker and less subject to error than the older more cumbersome latitude-longitude identification methods.”

Since 1953, Atlantic tropical cyclones have been named from lists originated by the National Hurricane Center. Those names are now controlled and updated by an international committee of the WMO. Interesting to note, the original name lists were only female names. Male names were introduced in 1979 and they now alternate with the female names. According to the WMO, six lists are used in rotation, thus the 2020 list will be used again in 2026 unless a name is retired.

It is often the case that a particular tropical cyclone is exceptionally damaging or costly, in which case the WMO reserves the right to retire a name. This is done simply because the WMO believes it would be ‘inappropriate for reasons of sensitivity.’ Names such as Harvey, Rita, Ike, Maria, and Sandy have all been retired. These infamous names will go down in history due to their impact on human life and property.

Now that we have exhausted the names associated with the English alphabet, we go Greek. We’re not totally in uncharted territory, though. In 2005, we saw six storms assigned to their respective Greek-letter so the question remains how deep into the Greek alphabet will we go. The Atlantic Hurricane Season doesn’t officially end until November 30 so we still have plenty of time to see more named-storms.

MORE INFO: What happens if we run out of hurricane names?