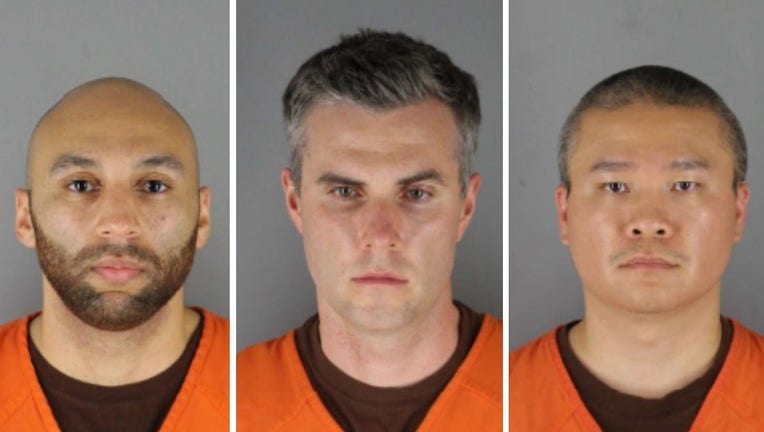 MINNEAPOLIS (FOX 9) - The trial for the three former Minneapolis police officers charged in the death of George Floyd is being postponed until March 2022 to allow the federal case against the ex-officers to proceed first, Hennepin County Judge Peter Cahill ruled Thursday.

The trial for the three former Minneapolis police officers charged in the death of George Floyd is being postponed until March 2022 to allow the federal case against the ex-officers to proceed first, Hennepin County Judge Peter Cahill ruled Thursday.

At a pre-trial motions hearing for Thao, Kueng and Lane on Thursday, Cahill set a new trial date of March 7, 2022, with jury selection beginning on March 8. The judge acknowledged the need for some distance from Derek Chauvin’s trial and all the publicity surrounding it, the federal charges and his upcoming sentencing.

All three defendants had waived their right to attend Thursday’s proceedings and did not appear in court.

Chauvin, the officer seen in a bystander video with his knee on Floyd's neck, was convicted of second-degree murder, third-degree murder and second-degree manslaughter last month. He is currently in custody at Minnesota's only maximum security prison and will be sentenced on June 25.

Last week, all four former officers were indicted with federal civil rights crimes for their roles in Floyd's death.

A federal grand jury has indicted the four former Minneapolis police officers involved in George Floyd’s death on charges they violated his constitutional rights during the deadly arrest.

Chauvin is charged with violating Floyd’s right to be free of unreasonable force by a police officer when he pressed his left knee on Floyd’s neck and held his right knee on Floyd’s back and arm as Floyd lay on the ground, handcuffed and not resisting, and continued to do even after Floyd became unresponsive.

Thao and Kueng are charged with violating Floyd’s right to be free from unreasonable seizure and excessive force. The indictment alleges the officers were aware that Chauvin was pressing his knee to Floyd’s neck while he was handcuffed and not resisting, and that he continued to do so even after Floyd became unresponsive, but they "willfully failed to intervene to stop [Chauvin’s] use of unreasonable force."

All four officers are charged for failing to provide medical care to Floyd. The indictment states the officers saw Floyd "lying on the ground in clear need of medical care, and willfully failed" to aid him.

Minnesota Attorney General Keith Ellison, who is the lead prosecutor in the case released the following statement regarding the delay:

"The State is ready to go to trial on August 23 and opposed moving the trial date, but we understand the court's rationale for doing so and will be ready to present our case to a Hennepin County jury at any date."

2 other subjects get attention at Thursday's hearing

Lane’s attorney, Earl Gray, addressed his motion on compelling the state to turn over Minneapolis Police Department internal affairs documents over the last 30 years showing use of force incidents where officers intervened and tried to stop the behavior.

Gray initially asked for 30 years’ worth of files given that is how long ago MPD homicide unit head, Lt. Richard Zimmerman, who testified in Chauvin’s trial, suggested he once intervened, telling a cop not to kick an arrested subject. Cahill appeared open to the idea, asking about the volume of files, how many files are there. Prosecutor Matthew frank will get that answer for the court in the next 30 days.

Gray says the potential intervention evidence could be used to impeach Zimerman or others or to show a pattern over the years of objectively reasonable MPD officers not intervening.

Frank objected to the request as overly broad and argued it does not matter what other officers did under different circumstances, what matters is what Lane, Kueng and Thao did or did not do in regards to Floyd.

The defense attorneys are are asking prosecutors to be sanctioned, accusing the state of leaking information about Derek Chauvin’s alleged plea deal last year. An article by the New York Times about the scuttled plea deal was published on the eve of Chauvin’s trial.

Cahill said he believes the leak came from the Justice Department, not the state prosecution team. So far, only Frank has signed an affidavit confirming he was not the source. Cahill wants more affidavits or else he would leave open the possibility of the defense calling prosecutors to the witness stand during an evidentiary hearing to be questioned under oath.