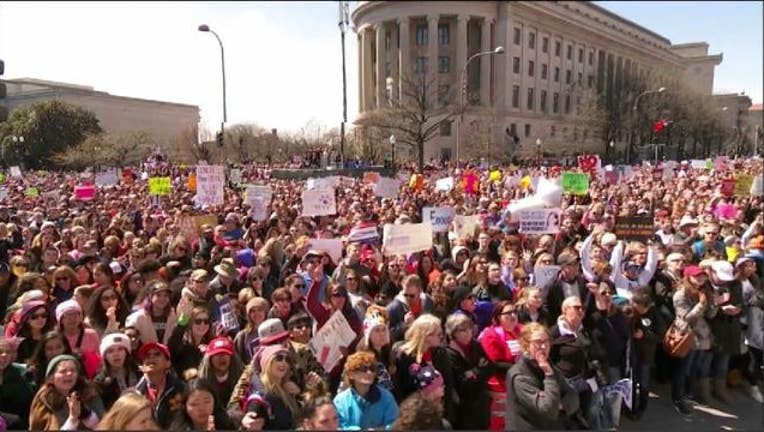 Credit: March For Our Lives

(FOX 46 WJZY) - Hundreds of thousands of people have gathered in cities across the nation for the "March for Our Lives" demonstrations protesting gun violence in schools.

The movement was initiated by students following the Parkland, FL school shooting that claimed 17 lives. Most of the marches began at 11:00 a.m. on Saturday, March 24.

You can see all of the protest happening around the country by scrolling through the Facebook Live videos below, or by clicking on the name of the city you want to see.

Thousands of people are gathering at Atlanta's Center for Civil and Human Rights to send a message to Congress about guns and school safety. The march will be lead student activists and Congressman John Lewis.

People are taking to the streets of Austin, Texas​ and around the United States today, to demand an end to gun violence at schools.

The "March for Our Lives" rally against gun violence has begun in First Ward Park in Charlotte.

Thousands of protesters are gathering in Chicago's Union Park for a rally before a planned march as part of March For Our Lives, a march organized by students from Marjory Stoneman Douglas High School which was the site of a deadly mass shooting last month.

Thousands march through downtown Detroit in the March for Our Lives.

SkyFOX view over the March For Our Lives in downtown Houston.

Activists march in Philadelphia to send a message to Congress — and the country — on gun control.

Hundreds of people are at the Arizona state capitol for the 'March for Our Lives' rally.

Local students are preparing to march in downtown Tampa as part of the national March for Our Lives events happening nationwide today.

Students and supporters head from Harriet Island Park to the state Capitol for March for Our Lives.

Thousands have packed Pennsylvania Avenue for the March For Our Lives as protesters are calling for action on gun violence. Rallies are taking place across the country this morning.