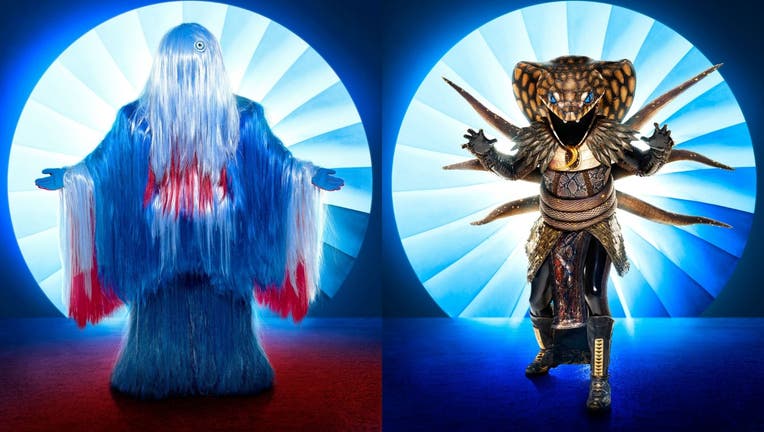 The Watchamacallit (left) and the Serpent (Right).

LOS ANGELES - On this week’s Masked Singer, not one but two costumed singers were eliminated from the Group B Finals.

The Whatchamacallit was revealed as NBA player Lonzo Ball.

Despite his odd costume choice, many fans of the show and basketball had already deduced that the New Orleans Pelicans point guard was underneath all of that blue hair.

Ball’s hints were probably easy to spot by his hardcore fans as he referenced his “magical start,” which Entertainment Weekly said was a reference to Magic Johnson who claimed Ball was the face of the Los Angeles Lakers when he joined the team in 2017.

Lonzo Ball’s brother, LaMelo Ball, was selected with the No. 3 overall pick in the 2020 NBA Draft for the Charlotte Hornets on Wednesday.

RELATED: 'The Masked Singer' sent the Snow Owls home and a panelist knew 'hoo' they were

The second elimination of the night was the Serpent, who was revealed to be Dr. Elvis Francois, an orthopedic surgeon and a social media singing sensation.

While panelists and fans believed Francois was Brian McKnight, Leslie Odom Jr. or Taye Diggs, according to Entertainment Weekly, his subtle nods to his profession with wordplay such as “...here’s the prescription number to my identity,” or alluding to his newfound fame as the uplifting singing doctor on social media, helped reveal his true identity.

Francois became a singing sensation amid the COVID-19 pandemic, even producing an album of song covers with proceeds going to the Center of Disaster Philanthropy COVID-19 Response Fund, according to his Instagram.

The Group C finals air next Thursday on Thanksgiving Day at 8 p.m. ET on FOX.

This station is owned by the Fox Corporation. This story was reported from Los Angeles.