AUSTIN, Texas - About 70,000 Texans are without power Thursday as the state sees significant icing across mainly northern parts of the state.

"We are dealing with one of the most significant icing events that we’ve had in the state of Texas in at least several decades," Texas Gov. Greg Abbott said during a news conference at the State Operations Center.

A winter storm that spans nearly 3,000 miles across the U.S. is producing ice and snow from Texas to New England. Bitter cold is forecast to follow it.

Abbott again expressed confidence in the state’s power grid, saying the power outages being reported right now are being primarily caused by ice-covered power lines or fallen trees. He said about 10,000 power line crews are already working to restore power, and 2,000 more crews are being brought in from outside the state to help.

According to the Texas Governor, the power grid is "fully functioning and continues to be reliable," as of 1 p.m. this afternoon, Feb. 3.

This is the first real cold-weather test of the state’s grid since the February 2021 storm that left hundreds of thousands of Texans without power and water for days. More than 200 people died during the storm. Investigations found frozen natural gas lines and power generation equipment were to blame for the blackouts.

Abbott said that, unlike last year, some of the power plants that primarily rely on natural gas to generate energy have a reserve of alternative fuels that can be used if the gas supply is lost.

Brad Jones, the interim CEO of the Electric Reliability Council of Texas, which manages the state’s power grid, said that, so far, no power generation has come offline because of the cold weather.

"We have a high degree of confidence in our grid," Jones said. "We feel very comfortable in our current situation."

Jones said icing in western Texas has been less than forecast, which has allowed more wind turbines to feed power to the grid.

Abbott also signed a disaster proclamation for 17 Texas counties. He said more counties will likely be added as the storm continues its trek southeast across the state.

The governor said 127 National Guard personnel have been deployed across the state.

"The State of Texas has deployed a plethora of resources to ensure our communities have the support they need to respond to this storm," said Governor Abbott.

"As we continue to face freezing temperatures, precipitation, and other dangerous elements, I urge Texans to be prepared and heed the guidance of their local officials as we all work together to keep people safe."

Those experiencing any outages are urged to call their local power provider to report and address it. Texans can also access power line safety reports and contact their power provider at puc.texas.gov/storm.

The Texas Commission on Environmental Quality is also encouraging Texans to follow information from their water provider, and to be prepared to take action in the event of a water line break.

If Texans experience a pipe burst on their property, they are urged to turn the water off on their street and report it to their water provider immediately. Texans can visit www.tceq.texas.gov for information on how to turn water off in the event of a line break. 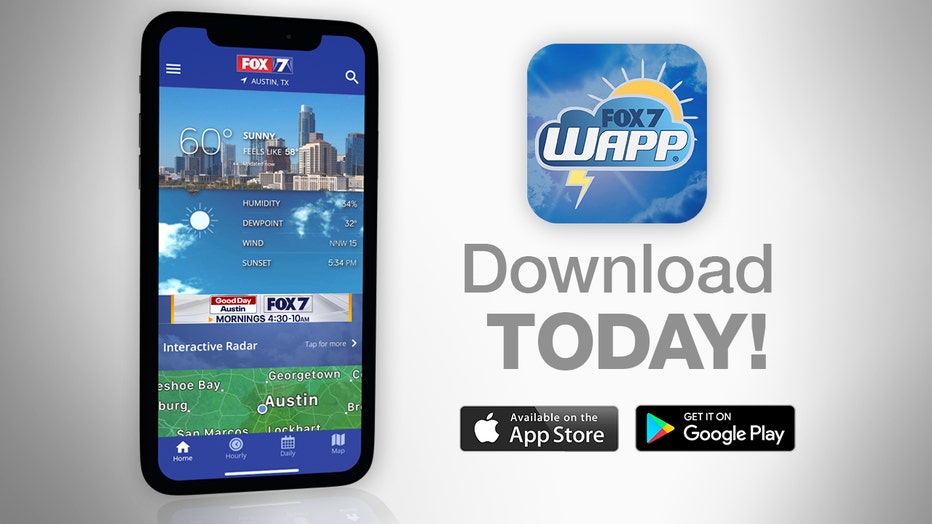 Track your local forecast for the Austin area quickly with the free FOX 7 WAPP. The design gives you radar, hourly, and 7-day weather information just by scrolling. Our weather alerts will warn you early and help you stay safe during storms.