Low humidity and gusty winds fueled multiple wildfires Friday in Texas, burning homes and other structures and prompting evacuations of hundreds of homes in small communities.

The Texas Forest Service is bringing in more air tankers to battle destructive wildfires in Eastland County, where there are four fires burning about 100 miles west of Fort Worth.

The largest one destroyed homes and ranch property Thursday night in and around the community of Carbon.

The Texas A&M Forest Service says the fire cluster, known as the "Eastland complex" has grown to more than 45,000 acres and is just 4% contained.

RELATED: Deputy dies while trying to save people from Eastland County wildfires

SKY4 flew above the cities of Carbon and Gorman, and flames and smoke could still be seen Friday morning, along with a lot of scorched land where trees, homes and buildings used to be.

Help From The Sky

Gov. Greg Abbott participated in an aerial tour of the Eastland Complex fires. Afterward, he met with officials from the State Forest Service and signed disaster declarations for 11 Texas counties.

Gov. Greg Abbott participated in an aerial tour of the Eastland Complex fires. Afterward, he met with officials from the State Forest Service and signed disaster declarations for 11 Texas counties.

The biggest strategy Gov. Abbott talked about was help from the sky. Planes were able to get up in the air and drop water. They couldn’t on Thursday due to high winds.

The Eastland Complex wildfire rages across more than 45,000 acres. Only 10% was contained Friday evening. At least 50 homes were destroyed, and that number is only expected to increase.

More than 50 different fire departments from across the state sent in 200 reinforcements. The city of Fort Worth sent eight firefighters. Watauga firetrucks were also on the way.

Officials are begging the public to be cautious with the threat still high.

Residents in several parts of Eastland County have evacuated, along with a nursing home, whose residents were moved to a community center in the town of Cisco.

Property owners are scrambling, trying to outsmart wind whipped flames that seem to have a mind of their own.

"He’s going to hit that fence line, then he’s going to have to get back in this pasture, so I’m trying to get this gate open, so he can come out and come back in through here," Clay Richardson explained. "It was dead since 10 o’clock [Thursday] night, and it just fired back up in the last 10 minutes."

Richardson and those helping him are trying to save hundreds of bales of hay. 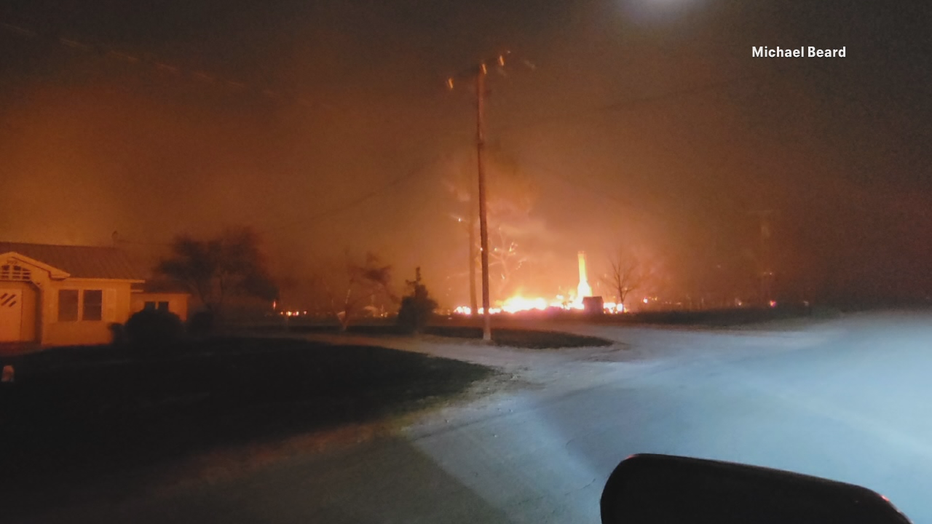 "500 bails," he said. "We’re going to do our best. These guys are from Wyoming. They came all the way from Wyoming, so we’re blessed to have other people here helping."

Thick smoke traveling for dozens of miles is all but an indicator of the more than 40,000 acres burned, leaving homes and buildings destroyed. Lives have been turned upside down.

A retired game warden and his wife lived in a home that was destroyed.

They evacuated Thursday night and came back to find it destroyed. The good news is they are safe and their horses and livestock survived."

The couple’s son-in-law describes the aftermath.

"This shed and that shed over there did not get affected and all the animals went in the shed, so we saved all the animals. Three goats, a donkey, and a horse, they are all good," Spencer Mullens said. "That’s sticks and bricks, right, that can be replaced. The most important thing that got out of the house was them. God protected them from all of this, so that was good."

Throughout the town of Carbon, there are scenes of destruction, but also structures spared.

"I lost my front house," Jasin Monk said. "I lost a lot of things over there, but my trailer house somehow survived."

Debbie Copeland's home in Carbon is now gone. She spoke with Good Day about what she is now going through.

Debbie Copeland's home in Carbon is now gone as wildfires in Eastland County cause evacuations.

In the small town of Ranger — about 10 miles northeast of Eastland — a church and several downtown buildings burned Thursday.

Residents said the windy conditions have made it especially difficult to put out these fires.

Local firefighters had to call in help from several surrounding counties.

Several decades-old structures are now reduced to rubble after out of control fires burned through the town.

"This building behind me, right here, used to be the fire station where I started my career. Next door there was a car lot," Fox said.

The Ranger fire chief said it started with a BBQ pit.

They got the call and were on scene within two minutes, but by then, there were already multiple fires.

"We already had three structures in danger," Fox recalled. "The middle structure caught on fire, when it caught on fire, we had embers flying all over across town. All across the tracks to the feed store, six to eight blocks, ten blocks, we had fires."

A few blocks away, Samuel Pena and his family ran outside when they heard loud crackling.

"We came outside and our whole backyard was just bursting into flames," he said.

Flames that were several feet high.

Fighting against the wind, with flames that kept reigniting, Samuel desperately tried to stomp out the flames and save his home.

"He was out running, helping everybody with jugs of water, just literally carrying them back and forth," Briona Pena recalled.

"I was terrified, really scared. I really didn’t know what to do, all I was trying to do was keep the fire from going closer to my house," Samuel said.

Second Baptist Church occupied a building that is now destroyed. Church member said it dates back to 1919.

The church’s song leader said that by the time she got to the building, it was already on fire and there wasn’t much they could do.

But church members still plan to set up outside Sunday and continue on with services, as the town begins the cleanup process after the devastating fires.

The fire chief said all the nearby departments they usually work with were already working other fires when they called for help, but Palo Pinto, Hood, Parker, and Stephens counties were all able to send assistance.

Eastland Fire says it’s facing a problem of people staying and trying to protect their homes. They are asking everyone to please evacuate before putting their life and first responders at first.

Shelters are opened here in Eastland at multiple churches for anyone evacuated.